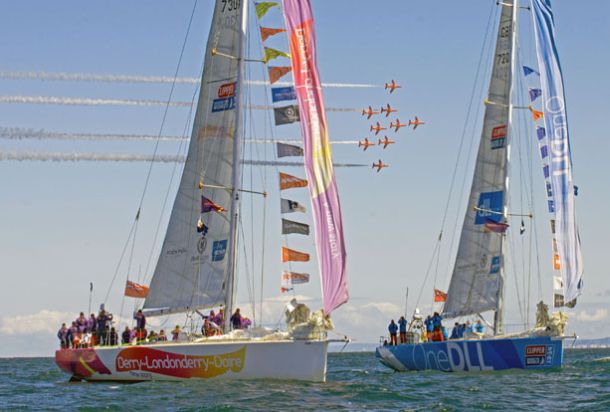 Following a spectacular send-off from Derry-Londonderry by the Red Arrows and big crowds, the penultimate race of the series, the OneDLL Cup to Den Helder in the Netherlands, is underway.

The near 800 mile race is a tactical challenge with the teams needing to choose early on where to position the yacht to take best advantage of the strong tides that flow round the British Isles.

The yachts are currently in light winds with conditions expected to lighten further over the next 24 hours before the incoming low moves the decaying weak ridge over the mainland.

Eric Holden, skipper of Henri Lloyd, said his team followed the local hero out to the north east to get out into the stronger tide but that failed to gain it anything on the boats that went west earlier.

“The wind was for the most part better than expected, however there was one light patch that really allowed the fleet to stretch out. The boats ahead and to the west were doing 6 knots, the next boats 5 knots, then us at 4 knots, and those further behind 3, 2, and 1 knots respectively.

“It was a classic case of the rich getting richer. We really felt for poor OneDLL who again seems to find the worst of the wind, we could see it becalmed with sails flapping in the waves only a mile to leeward as we were still moving in six knots of wind.”

Team Garmin skipper Jan Ridd said the start at the entrance to Lough Foyle allowed the boats to take advantage of the last of the ebb tide, which he used to get out into open water before tacking ensuring he could clear an island off Malin Head on the other tack.

“Other yachts decided to tack earlier and some later which saw the first split in the fleet. We have all been on the same tack overnight but some very variable winds have seen some boats fall behind, we are all now heading north west towards the Hebrides in a light northerly breeze. Team Garmin is well situated in the middle of the fleet with Henri Lloyd just ahead of us and GREAT Britain and OneDLL astern of us. We are currently working as hard as we can to get past Henri Lloyd.”

Switzerland is currently leading the fleet, with Jamaica Get All Right in second and PSP Logistics third.

There are no Stealth Modes, Scoring Gates or Ocean Sprints factored in to this four day race.