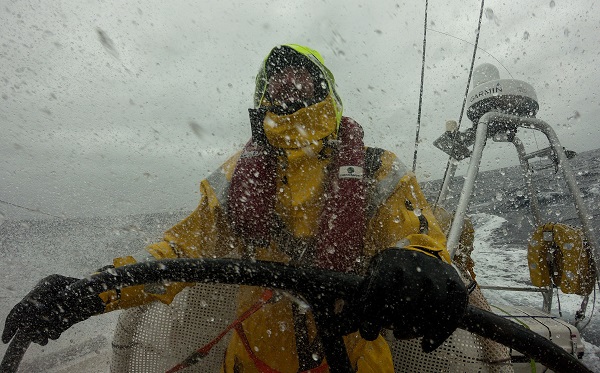 The Stormhoek Race to the Cape of Storms is set for an exciting finish, with frustrating winds and the wide use of Stealth Mode amongst the fleet leaving race fans in suspense.

Frontrunners Garmin, Derry~Londonderry~Doire and Mission Performance are in Stealth Mode until 1200UTC today when positions will be revealed and followers will see who fared best in the frustratingly light winds of the high pressure ridge. GREAT Britain and Unicef have gone into Stealth Mode too after their 0600 UTC positions were broadcast this morning.

From beneath its invisibility cloak, Garmin, which was the lead boat prior to going under the radar in Stealth, recounted a surprise this morning when the team received a call from Mission Performance Skipper Greg Miller over the VHF, meaning its opposition was now within a 20-mile range.

Garmin Skipper Ashley Skett said: “It's tough helplessly sitting here and watching a lead that we have worked so hard to build be eroded away due to an unavoidable wind-hole just 350 miles away from our destination. We are doing everything we can but the truth is, if there's no wind, we can't sail. So we wait for the wind to build again, which it should in the next few hours, and hope that our distance ahead of the rest will be enough to see us remain in the lead for the final push today and tomorrow.”

Simon Rowell, the Clipper Race Meteorologist, made some predictions about the final few hundred miles and some surprises the weather may hold.

“It's all about the ridge today, and also possibly Qingdao's Ocean Sprint – they are sitting in a decent band of wind now, so are one to watch. The lead boats will be looking for the wind to fill in again from the south east, once it does that means they are through the ridge and heading in. The coast itself may still hold surprises though, there are a few local traps on the way into Cape Town itself,” Simon said.

Explaining the westerly teams’ progress, Race Director Justin Taylor updates: “LMAX Exchange and Qingdao are still enjoying good boat speed out west of the rest of the fleet. As the main group have slowed down due to the South Atlantic High pressure system advancing behind them bringing lighter winds, LMAX Exchange and Qingdao have therefore increased their apparent lead over them.

“LMAX Exchange and Qingdao’s delayed start was not race related and so they are competing on an elapsed time basis. Weather not identical, but it’s the fairest method. Tactical routing by each team has an impact on the specific conditions they’ll encounter.

Justin adds: “These positions are based on their average speed, but ultimately the thing to watch is if either team finishes within 86hrs and 10 minutes of another team, they will finish above them in the placings.”

LMAX Exchange has started its Ocean Sprint though Skipper Olivier predicts it will be impossible for his team to set the fastest time as he expects to be in light winds under a new high pressure area. Further south, Qingdao has better winds as they approach the start their sprint.

IchorCoal’s time of 27 hours 53 minutes is now the one to beat on the Ocean Sprint, with the South-African sponsored team completing the section faster than previous record holder Derry~Londonderry~Doire.

And finally, the Clipper Race Committee has finalised the list of penalty points to be given to the teams following the assessment of damages and repairs that were needed after the race from London to Rio in the Atlantic Trade Winds leg.

The Race 1 penalty points have been give out for damage incurred while the boats are racing. They do not affect podium positions but they could make a difference to the overall race standings. To find out more and see the points given out, click here.

What positions will the frontrunner teams emerge in when their Stealth Mode period is over? Will Qingdao break IchorCoal’s Ocean Sprint time? When will the wind pick back up for the lead yachts?