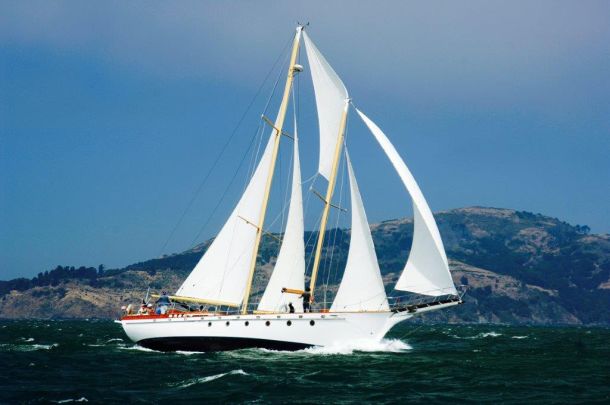 Along with the Grand Prix racing yachts and glamour cruising boats, there will be an element of 90-year-old international yachting history taking centre stage at next month’s Audi Hamilton Island Race Week. It will come in the form of the classic 23-metre long schooner, Condesa del Mar, owned by Australian couple Mark and Jenny Gaskell.

Condesa del Mar isn’t 90 years old, but her design is… and it comes from the drawing board of the famous American yacht designer, L. Francis Herreshoff. This particular yacht was professionally built from ferro-cement by Wilmington Shipyard, in Delaware, USA, and launched in 1990. She was described at the time as being “fair, fast and responsive”.

The Gaskell’s tried to buy her when she was first offered for sale about six years ago, but, much to their disappointment, they missed out. However, as luck would have it, she came onto the market again two years ago, and this time their purchase effort was successful.

The yacht was in Cabo St. Lucas, Mexico, when they stepped aboard as the new owners, and since then they have enjoyed a leisurely 7000 nautical mile cruise, island-hopping across the Pacific before reaching their home port of Brisbane.

Now the Gaskell’s are preparing for a new challenge: they want to try racing their yacht, and they have decided her debut will be at Audi Hamilton Island Race Week 2014.

“We are really looking forward to being at Race Week,” Mark said. “Condesa del Mar competed in some of the classic schooner events on San Francisco Bay before we bought her, and she certainly impressed everyone. We hope she will do the same at Hamilton Island next month.

“She carries a total of 3650 square feet of sail when everything is set. The good news for us is that her rig is nowhere near as complicated as it was when she was designed in 1924. She was set-up for short-handed cruising when she was launched, so that has made our life on-board much easier.”

The Gaskell’s are not certain where they will head after Audi Hamilton Island Race Week, but it is highly probable they will continue sailing around the world until they complete a circumnavigation.

Audi Hamilton Island Race Week 2014 will be staged from August 16 to 23. The regatta is open to the full spectrum of keelboats, sport boats and multihulls.

The Notice of Race, entry form and regatta information are all available on the regatta website – www.hamiltonislandraceweek.com.au