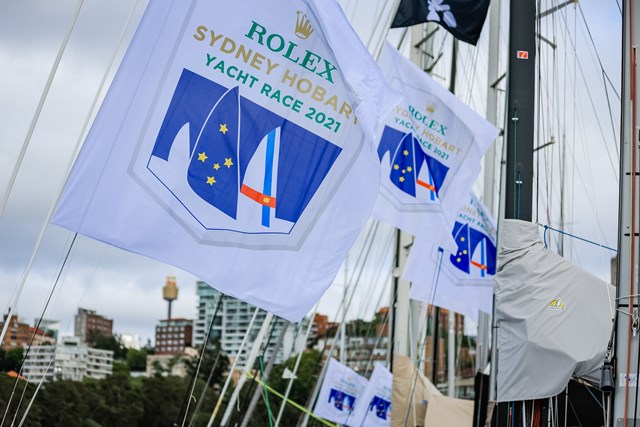 Crews in the 2021 Rolex Sydney Hobart Yacht Race were eagerly bracing themselves this morning for a classic tough start with a forecast southerly set to send them on their way.

The Bureau of Meteorology of NSW today confirmed the forecast for the 1pm start of 15 to 20 knot southerly winds that would likely increase to 25 knots outside the Heads.

Conditions for the first two days are likely to remain similar, although winds could shift to the south east as the feet heads south. Meanwhile 1.5 to 2.5 metre waves are expected.

For all boats, the challenge after starting and exiting the Heads will not only be to settle into their race rhythm and watch systems, but to keep their boats intact in the tough conditions.

At the Cruising Yacht Club of Australia, the mood was of relief that the 628 nautical mile race was poised to start after the disappointment of last year’s cancellation due to COVID-19.

As the crews continued to receive their mandatory COVID-19 PCR test results, attention focused on the forecast and what impact it might have on the fleet.

“It’s looking like a pretty standard Hobart,” said CYCA Commodore Noel Cornish of the southerly. “You can see [it] out there now and it’ll build.

“What we’re going to see out there in the next 24 hours is something that you would expect to see on the race track in a normal Sydney Hobart Yacht Race.”

Three 100-footers will be vying for line honours: the Juan-K 100 LawConnect, owned and skippered by Christian Beck, the Dovell 100 SHK Scallywag 100, skippered by David Witt, and the Reichel/Pugh 100 Black Jack, owned by Peter Harburg and skippered by Mark Bradford.

Three boats that looked to be ideally suited for the conditions forecasted this morning in the battle for overall victory and the Tattersall Cup are the S&S 47 Love & War, owned and skippered by Simon Kurts; the S&S 34 White Bay 6 Azzurro that is owned and skippered by Shane Kearns; and the Schumaker 54 Maritimo, owned by Bill Barry-Cotter that will be skippered by Michael Spies.

Views varied about the forecast and its impact, on the docks of the CYCA this morning.

Les Goodridge, owner/skipper of the X-50 Wax Lyrical said: “The weather is bits of good and bits of bad.”

Bob Thomas, the navigator on the Sydney 38 Cinquante, said: “It’s great weather for us … a big blow at the start. The first in 20 years … it will slow the big boats down.”

Matt Allen, owner/skipper of the TP52 Ichi Ban, which has twice won the Tattersall Cup, said he was readying for a slower race.

With his crew all COVID tested and ready to race, Allen said: “We are probably more focused on how we’re going to configure the boat and which sails we’re going to take.

“The weather is looking pretty slow. We’re going to be out on the racetrack for a long period of time.

“Probably for the higher rated boats like us it [the weather forecast] doesn’t really suit.

“It’s going to be challenging for us. We’re looking at probably three days, three days and five hours.”

Asked about the pressure on navigators to read the conditions well in this year’s race, Allen said: “Every Hobart has its technical challenges for sure. I think this race is going have more.

“There are usually two or three big decisions in a race. This race might have six or seven.

“There’s probably not that many decisions to make early on in the race apart from when we tack. And that first tack is not that complicated, but the race later is going to be full on.”