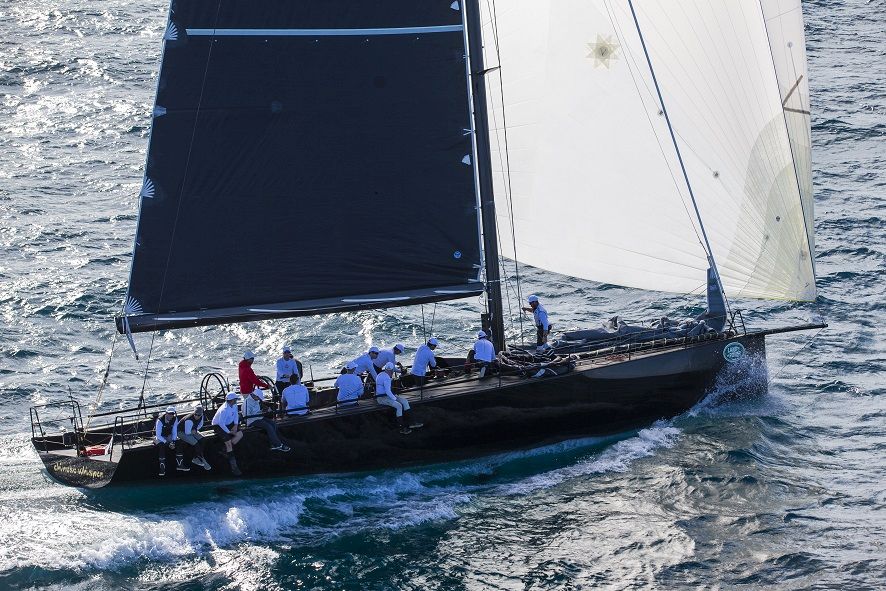 Chinese Whisper, along with Matt Allen’s Ichi Ban and Sebastian Bohm/Bruce Foye’s The Goat were recalled after being luffed over the start line by The Goat. However, a short time later, the CYCA’s Sailing Manager Justine Kirkjian reported: “Chinese Whisper made a huge comeback to be first out of Sydney Heads.”

“We recovered quickly,” confirmed Henry, whose boat led her larger Kiwi rival, Giacomo, a V70 owned by Jim Delegat, around Flinders Islet and was not overrun until they struck heavier breeze off Bulli on their way home. In the end, Giacomo beat them over the line by 31 minutes, finishing at 8.16.09 hours last night.

“The north-east wind built to 15-16 knots past Bulli. Once it was that windy, they powered up – that’s their sweet spot,” the Sydney yachtsman said.

Principal Race Officer, Denis Thompson sent the fleet off in a sickly 3 knot northerly. “But we could see a stronger breeze line up the Harbour. Those who were recalled were not really affected, as the conditions allowed them back into the race.

“It was gratifying,” he concurred. “We made a mistake in that race and we paid for it.”

This time it was Chinese Whisper on top of the podium, with Ichi Ban (Matt Allen) second overall, West Australia’s M3 (Peter Hickson) third, followed by two more of their gang, Celestial (Sam Haynes) and RKO, owned by newcomer Aaron Rowe, who is shaping up to be a hot prospect.

“We had a glorious run down to the Island. We got away from the TP52s, but when the wind hit 12 knots, they planed and caught up some time. Once we were around the Island, the wind built and we got away again. We were going like a train upwind,” said Henry, who had calculated they had Ichi Ban by five minutes overall at the Island and just needed to sail well upwind to hold on.

Chinese Whisper tacked her way back up the coast to the finish line, sailing close to the coast all the way, as her owner felt there was more pressure inshore. He remarked it was overcast and grey all the way, the antithesis of their run to the Island.

“I want to acknowledge and thank Will Oxley (Ichi Ban’s navigator) who took over doing the sked for the fleet, as there were some problems. That was decent of him and displayed good sportsmanship,” Henry said. “I’d like to add it’s good to see new owners come to the TP52 class, it makes for better competition for everyone.”

Shane Kearns’ Komatsu Azzurro, the oldest and smallest boat in the fleet, was last home, finishing shortly after 10.30am this morning. A long race for that crew.

The Flinders Islet race started at 10am off Point Piper on Sydney Harbour on Saturday and was the second race in the CYCA’s Blue Water Pointscore.

Full results will be available on the CYCA website at: