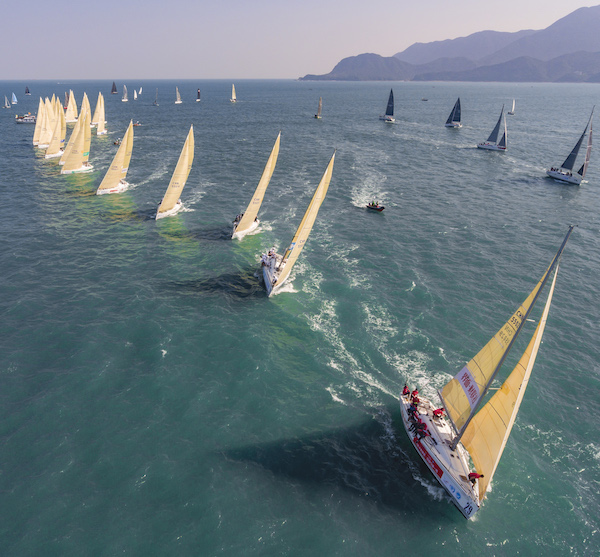 Shenzhen, China: Another race win for Cheche Team has virtually wrapped up victory for the Spanish crew with a day to spare in the Beneteau 40.7 one-design fleet at the China Cup International Regatta.

Rayco Tabares Alvarez and his crew seized on a little match race that was playing out between two of their rivals on the windward/leeward race course.

Laurie Jury, skipper of XianLiao, the boat sailed by a young crew from the Royal New Zealand Yacht Squadron (RNZYS), was happy with a second place, but wished it might have been a winner’s gun instead.

“We had a pretty good race, held our lane off the start, and we were leading for a while,” Jury said. “But we got tangled up with ChinaOne.Ningbo, the Spanish took advantage and were launched after that.

“We got a good shift, ChinaOne was sitting on our hip and we couldn't tack. They took us past the layline and ChinaOne overlaid too, so they put themselves back into second behind the Spanish and us into third. If they had have tacked earlier, they would have been first easily.”

Of course there are always two sides to a story, but ChinaOne.Ningbo’s Craig Monk confirmed Jury’s analysis: “That’s pretty much what happened. They’ve got a match racing helmsman on the Kiwi boat (Nick Egnot-Johnson) and we’ve got Keith Swinton. Sometimes maybe these guys forget they're in a fleet race for a split second,” laughed Monk, himself an America’s Cup veteran.

“I think that's exactly what's happening, some old rivalry, some history between those two skippers.”

Monk and the Chinese crew ended up third in today’s race behind their New Zealand rivals, but that’s a very good result and another sign of growing ability following ChinaOne.Ningbo’s win on the previous day. They were also blessed with the presence of Hu Bing, one of China’s biggest movie stars.

“Hu’s a big fan of ours,” said Monk. “We sailed with him for half an hour before the race, he was steering the boat and loving it. Then he watched our race and cheered us on. He’s an ex Olympic rower, 6ft 4inches of him, then he became a model and now a movie star. It’s great that he loves sailing. We took him out on the foiling GC32 catamaran and now he’s sailed on the Beneteau 40.7.”

While the slippery smooth Cheche Racing has smashed its way to a big lead with 10 points compared with second placed Forever 9 on 21 points, the battle for third place on the final day is looking very tight indeed.

Skip Lissiman’s bunch of America’s Cup veterans on Down Under Racing Team hold third spot just a point in front of ChinaOne.Ningbo’s America’s Cup aspirants of the future. Also sitting within a few points of the podium are Fjord III from Uruguay, Doubao from Great Britain and the Kiwis who are still making up lost ground from two start line disqualifications at the start of the regatta.

Saturday also saw the start of the Youth One Design Class regatta, with more than 120 children embarking on their own China Cup competition as they launched off Judiaosha Beach in small dinghies and FarEast 23R keelboats. The aim is to introduce the next generation to the joys and challenges of competitive sailing. It’s about learning the ropes, mastering the art and science of sailboat racing at a young age, developing skills that these young sailors will carry with them for the rest of their lives.

Meanwhile in the other senior fleets, Phoenix holds a two point lead in IRC A ahead of Shenzhen Seawolf; in IRC B, Beijing Hongyuan Team is two points ahead of her nearest rival, Zhen Ao Sailing Team A. IRC C is shaping for a fascinating showdown between the top three after Whiskey Jack won today’s race having been U-flag disqualified for a premature start on the previous day.

Yomovo Guangzhou Won-fun Sailing Team still leads IRC C but after a fourth place in today’s race their lead has reduced to a single point ahead of Whiskey Jack. Ready to pounce on any mistake by the front two is third placed Yang Fan Zhe Zhao Yachting.

Teams from 32 countries and regions are competing in racing divisions which include the Beneteau First 40.7, IRC Class, Bavaria One Design Class, J/80 Class, HKPN Class and Youth One Design Class. Sunday 10 November marks the final day’s racing in Daya Bay, with the prizegiving set to take place on Sunday evening.