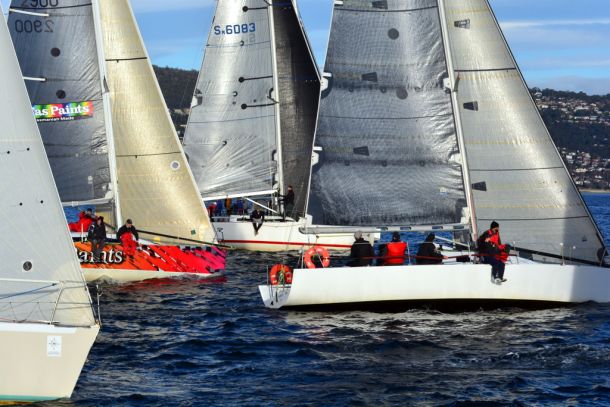 On the water, Richard Grant’s Knoop 39 Magellan looks every bit a comfortable cruising yacht, wide beamed with a large cockpit and long coach house that obviously provides lots of space below decks. Below the waterline, the design concept is quite different, a sleek hull and fin keel with bulb that makes her a fast and efficient racing yacht, particularly in a light breeze – as she showed on Hobart’s River Derwent today.

Both the temperature (from 6º to 9º C) and the breeze (6 to 10 knots northerly) rose during the morning providing close racing in the three divisions.

Grant brought Magellan, a one-off design by Tasmanian Walter Knoop, to Hobart as a competitor in the last Launceston to Hobart Race and recently re-located to Bellerive, where he joined the Bellerive Yacht Club.

Division 1 saw the usual close racing between the three Mumm 36, with Tas Paints beating Jeff Cordell’s Host Plus across the finish line by just 20 seconds.

Madness came in fourth in fleet but beat her Mumm 36 rivals on corrected time.

Veteran Tom Kirkland sailed Ragtime to line honours in Division 3 but had to be content with second on corrected time, the winner being Quabrada (Tim Maddock) by just 18 seconds. Kama (Don and Rod Cushion) placed third.