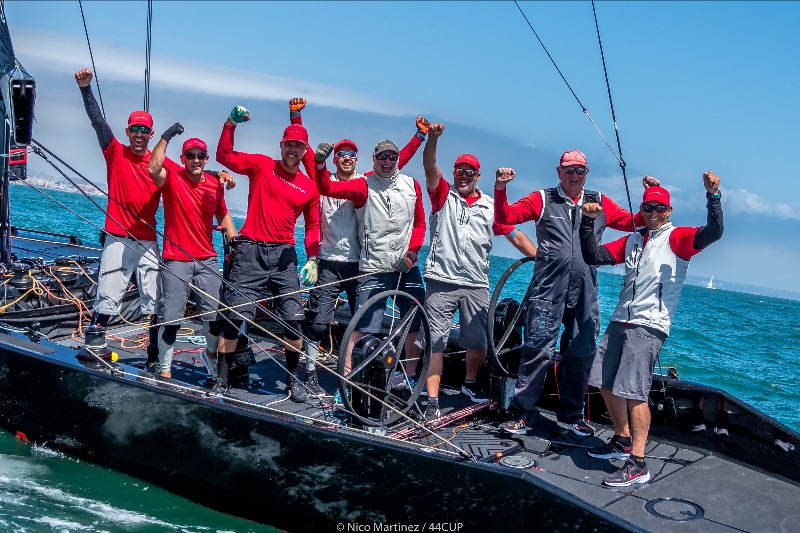 Portugal: Normally 44Cup events are decided in the final gybes of the last leg of the last race after four days of competition.

But at the 44Cup Cascais, the second of the 2022 series for the high-performance owner-driver one designs, the opposite was true. Charisma of Monaco-based Dutchman Nico Poons, set the benchmark high after scoring three bullets on the opening day.

Charisma’s advantage since Thursday may have gone up and down, but they ended the weekend having won five out of 11 races sailed, including today’s third, concluding one. They finished the 44 Cup Cascais a massive 12 points ahead of Igor Lah’s Ceeref powered by Hrastnik 1860. Charisma’s result was especially unusual since at the 44Cup Lanzarote in February they were last.

Wind conditions were similar to yesterday with a 10-knot southerly and cloud cover giving way to blue sky. PRO Maria Torrijo today moved the race area to due south of Cascais, protecting it from the worst of the north westerly Atlantic swell. However instead there was a confused sea – swell coming from two directions plus wind driven waves from the south.

Today, as on Friday, Chris Bake’s Team Aqua was fastest out of the blocks, winning the opening race. However, they finished last in the next race and looked set to repeat this when they were OCS in the last race, salvaging a fifth – but this ultimately cost the 2021 44Cup champions third place here.

“It was a bit more open, and it was about getting the boat settled in and set up well,” said tactician Cameron Appleton of today’s conditions. Of their first race win he added: “We went to the right side and chased a bit more pressure and the current was favourable. We have been sailing well all week. The guys have done a good job. We have had a lot of great moments. We have had good starts, but not capitalised on them.”

Going into the final race Charisma only had to finish to win the event. Nonetheless undeterred they won this in emphatic style. Of their overall victory, skipper Nico Poons mused: “It is a good feeling – we won! I am amazed, especially since last time we didn’t do well in Lanzarote and now we have won with such a big advantage. The first day with three bullets – that was a cracker, insane! The driver needs his focus, but it is the team that is making or breaking things.”

Even a man usually full of theories, Charisma’s mainsheet trimmer Chris Hosking was at a loss to explain their success: “I wish I knew! Sometimes it just goes your way. It doesn’t feel like we did anything particularly different to what we did in Lanzarote when we finished eighth.” Certainly, the Charisma team usually performs well in breeze.

Going into the last race, Ceeref had already secured at least second overall. That came as no surprise for Igor Lah. “It is the curse of Cascais for us. We ALWAYS finish second here! I have to congratulate Charisma – they sailed extremely well. But we are happy – we have kept our golden wheels,” he concluded referring to the 44Cup’s equivalent of the Tour de France leader’s yellow jersey.

While second was secure, this was far from the case for third overall. Team Aqua held this going into the final race, but tenuously with Aleph Racing and Artemis Racing both a point behind and Team Nika a further two back.

While Charisma was the stand-out team here, in fact today’s winner in terms of scoring lowest points was Team Nika which won today’s second race and followed this up chasing Charisma home to claim second in the last race. These results propelled them up the leader board from sixth to third, albeit only decided on countback from Aleph Racing and Artemis Racing.

“We had a great start, and we picked the first two shifts in the right way – we didn’t just hit the corner,” explained Team Nika’s tactician Francesco Bruni of their race win. “We were very excited that we still had a chance to finish in the top three after that. Then we were a little bit lucky to finish on the same points as Artemis and Aleph and win on countback. We are happy and coming third is important for the season’s points.” As to Charisma’s performance, the Italian America’s Cup helmsman explained: “That is typical of the 44Cup. One day you are zero and then you are the hero.”

44Cup newbies Black Star Sailing Team enjoyed a brief moment of glory when in today’s second race they reached the top mark in second, ultimately ending up sixth in this race. “It was a great event with a lot of learning,” said skipper Christian Zuerrer of their first 44Cup event. “It is always nice to be in the pack. In these conditions it was challenging to steer and with our old jib we couldn’t sail upwind like the others. But it was much better today than yesterday.”

44Cup racing will continue with the circuit’s Swedish stopover, the 44Cup Marstrand over 29 June to 3 July.

Find out more at www.44Cup.org