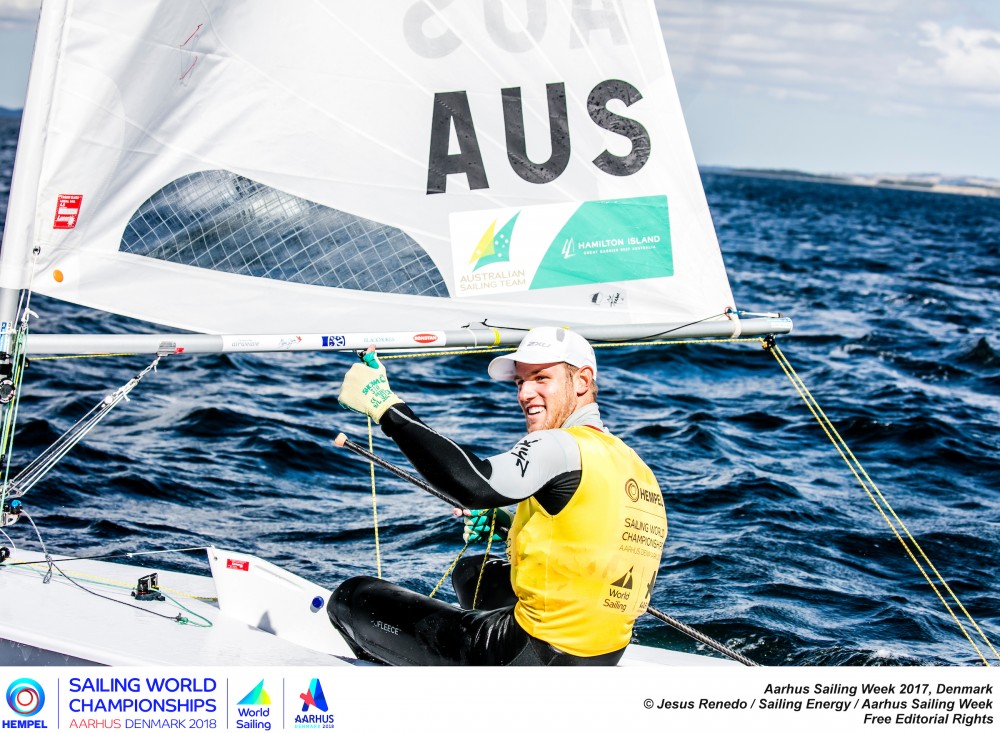 If test events are all about checking how systems are working, then the Hempel Sailing World Championships Aarhus Denmark 2018 Test Event has confirmed that the Australians are still a well-oiled machine in the Laser, Aarhus Bay is a great sailing arena and Nicholas Heiner’s weight gain programme (95 kilos and counting) is paying out.

Denmark and the Netherlands shared the honour of topping the medals table with 2 golds and 1 bronze each.

After the lighter airs yesterday, a final day of racing in stronger, veering 12-15 westerlies, gusting to 20, made for medal races of shifting fortunes that were hard to control. But the top sailors have prospered here in the range of conditions during the week and it was no surprise to see the two best laser sailors in the world take gold and silver, albeit with Matthew Wearn finishing above Tom Burton, the Olympic champion. Sam Meech, the Olympic bronze medalist took third, finishing behind Burton in the medal race.

“It’s been fantastic sailing here,” Wearn said. “I think coming in fresh for the Worlds next year would have been a pretty big mistake, and would have made it really hard to get a good result. It’s been great, we’ve had a variety of conditions, all different directions, it’s been fantastic for a test event. I like the shifty stuff where you’ve got to be on the ball every race. The best sailor is going to come out on top at the end and win a regatta like that.”

“In the medal race I went for something off the start line and it didn’t work out, so I rounded the top mark as one of the last few boats,” Wearn, who took a healthy 13-point lead into the medal race, added. “We were sailing really close to the shore, with an offshore wind direction, which made it unpredictable. I had a bit of work to do for the rest of the race, but the wind was shifting so much there were plenty of opportunities to catch back up – it was a bit of snakes and ladder kind of day. I was pretty glad to have the points buffer.”

German Olympian Philipp Buhl, confirmed his reputation as one of the nicest guys in sailing by going out of his way to thank the volunteers from the country’s 270 sailing clubs – they say that you are never more than 50km from the coast in Denmark – who have also been testing their systems. “What made the experience great was the people working here,” Buhl, who finished sixth overall in the laser, said. “They were all very helpful and very friendly. I think they’re really looking forward to hosting this event and we athletes can feel that and that makes a big difference to some other venues.”

That will have been heartening for the Danish Sailing Association and the City of Aarhus as they count down to the World Championships next year.

“After such a successful Test Event, we know what works and what can be improved and we are looking forward more than ever to hosting the World Championships in a year,” Lars Lundov, CEO of Sport Event Denmark, said. “In 2018 we will take the event to the next level when we open the Aarhus International Sailing Center, which will be one of the most modern and advanced homes for sailors in the world. As one of the sailors said this week about positioning: ‘it’s about getting to the right place on time.’ Aarhus is the right place at the right time.”

That sailor was Holland's Heiner, the former laser world champion, who is still bulking out in his transition to the Finn. It is working because he was strong again in the windy conditions and managed to completely control Hungary’s Zsombor Berecz, who had started 7 points behind, to win the Finn. “I was really happy with my performance, especially in the big breeze,” Heiner said. “I’m not the heaviest and tallest guy – they’ve got 10kg on me – so have strong races in the big breezes this week was really nice and gives me a lot of confidence. Maybe the conditions in Aarhus favour the heavy guys a bit, but the light one won.”

Berecz cannot wait until next time: “He did a very nice job so I can’t wait for the rematch.”

In the other medal races on Sunday, Sweden’s Josefin Ollson won a thrilling and fluctuating Laser Radial medal race, passing America’s Erika Reineke – who she started the day two points ahead of – on the second upwind. Switzerland’s Linda Fahrni and Maja Siegenthaler won the women’s 470 by one nail-biting point as they trailed in 3 boats behind Poland’s Agnieszka Skrzypulec and Irmina Mrózek Gliszczynska. Turkish brother’s Deniz and Ates Cinar, defended their 12-point buffer in the men’s 470.

Country of coasts, city of sails, bay of champions, Denmark are already counting down and gearing up Aarhus 2018.

It was an excellent event for the Australian team. In addition to the gold and silver in the Laser, Will and Sam Phillips finished second in the 49er with David Gilmour and Joel Turner taking bronze. Others to finish in the top 10 in their class were Tess Lloyd and Eliza Solly (4th) and Amelia Stabback and Ella Clark (6th) in the 49erFX; Carrie Smith and Jamie Ryan (5th) in the 470; Jason Waterhouse and Lisa Darmanin (5th) in the Nacra 17; Ash Stoddart (6th) in the Laser Radial and Jake Lilley (10th) in the Finn.