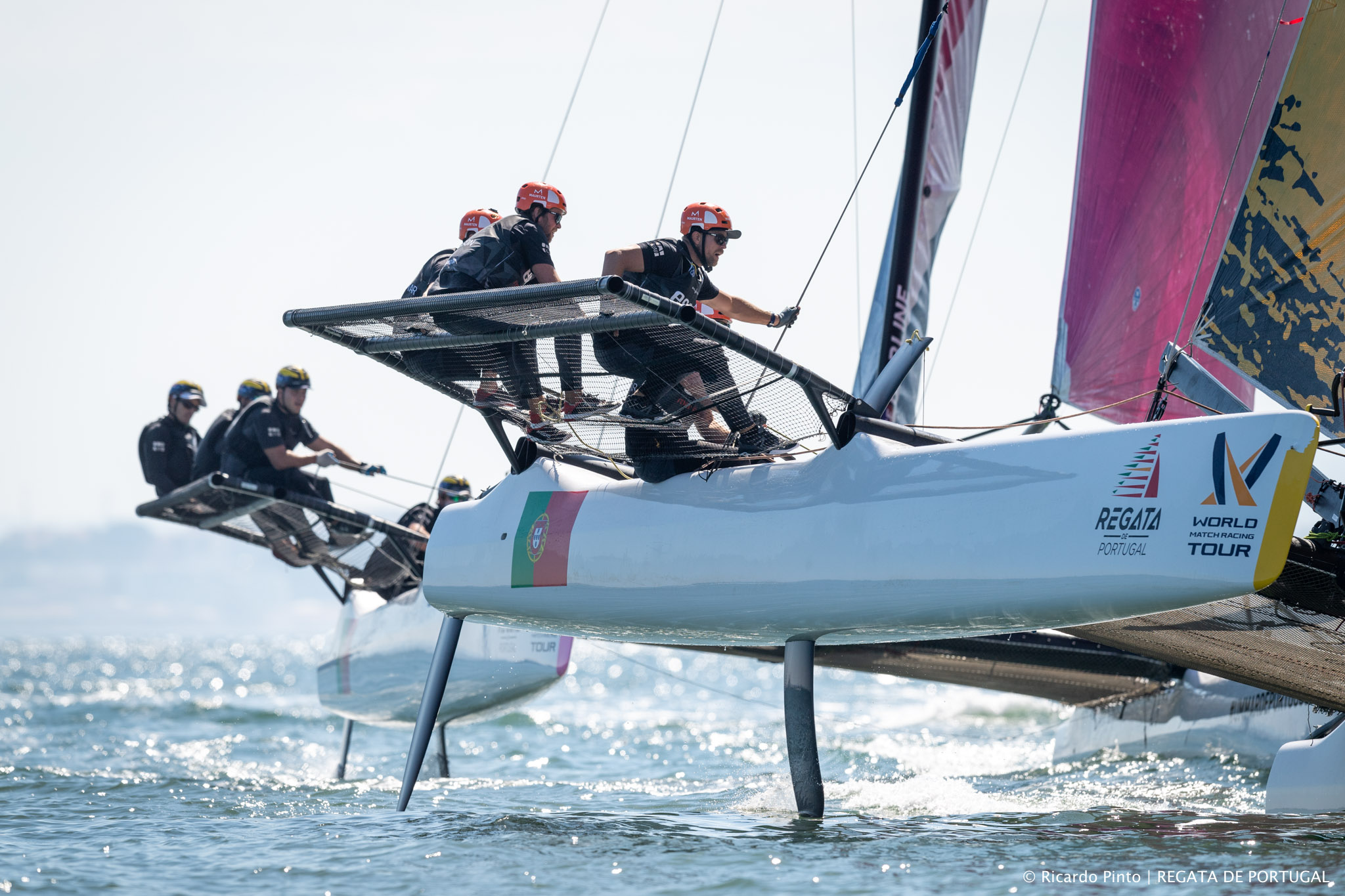 The Quarter Final Stage concluded today, and defending Match Racing World Champion Torvar Mirsky has been knocked out of the competition by the young Swede Nicklas Dackhammar of Essiq Racing Team. Overnight the Australian skipper, who currently sits third on the overall Tour leaderboard, led the pair 2-1 after sailing ended last night as the sun set on Lisbon.

“We had really tough day, starting 2-1 down against Mirsky,” said Dackhammar from the pontoon after racing. “They were all tough matches today with a lot of current. We ended up taking the two races today. Tomorrow we will meet the French, as we did in Marstrand. Last time Guichard won but we’re gonna reverse the result this time.”

The Frenchman, Yann Guichard, and his Spindrift Racing were also victors on the second day of the Quarter Final Stage. Guichard faced another Swedish skipper battling in the Quarter Finals, Johnie Berntsson racing with his Berntsson Sailing Team. As time ran on today and the race committee made the decision to cut racing to first-to-two points, this gave Guichard the opportunity to make it a swift 2-0 victory in Portugal.

“Its been a long day for everybody,” said Guichard. “We are looking forward to moving on to the Semi Final to face Nicklas and his team. We have had some epic battles in the past so its gonna be tough but I am looking forward to racing against his team.”

Overnight, Sydney’s Harry Price led yet another Swedish team, Måns Holmberg by 2-0. Still at first-to-three points this morning, Holmberg began with a must win race. The pressure was showing as Holmberg collided with the committee boat which ultimately handed the match, and the overall tie, to Price and his Down Under Racing.

The final pairing was between Ian Williams’ GAC Pindar and Markus Edegran’s Team Torrent. Williams, the six-time Match Racing World Champion, was the favourite on paper coming in to this bout as he has bested the young American in their last two meetings. Unfortunately for Edegran, today was not his day to turn the tables as experience paid dividend and GAC Pindar took the battle 2-0 and progress to tomorrow’s Semi Final Stage.

So whilst the final remaining Swede, Nicklas Dackhammar, looks to take down another top seed in this competition in Yann Guichard, in the other match Ian Williams will look to reach his second final of the season. Standing in his way is Australia’s Harry Price. History dictates this will be a closely fought Semi Final Stage from both sides of the draw as these teams have fierce battles behind them.

With many races still remaining in the schedule, the Semi Final Stage will start as a first-to-two points battle in both draws. By the end of tomorrow we will have a champion of Regata de Portugal as we move one step closer to crowning the 2018 Match Racing World Champion.