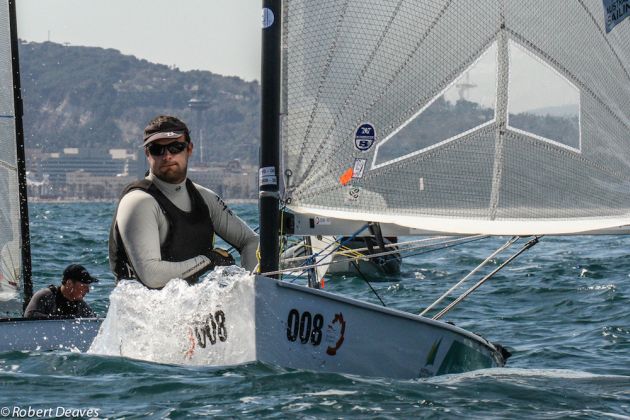 Less than five months out of the 2016 Rio Olympic Games the European season opener for Australian Sailing’s Finn sailors, the Finn European Championship (7 – 12 February 2016), wrapped up in Barcelona, Spain on Saturday, 12 February 2016.

The Championship proved to be a challenging and testing week for Australian Sailing Squad’s Oliver Tweddell (VIC) and Jake Lilley (QLD), who finished the event in 22nd and 36th respectively.

Ten races were scheduled for this championship, but weak and tricky wind conditions throughout the week only allowed for seven after only one race was possible both on the first and third day and no racing on the fourth day of the regatta. With reduced racing opportunities and many nations using the week as part of their Olympic trials process it was an intense week for the 90-boats fleet.

For Australia’s Finn sailors it is selection season and who will be representing Australia in the class come Rio is yet to be decided over the next few months with Jake Lilley and Oliver Tweddell vying for selection.

Australian Sailing Squad’s Jake Lilley (QLD) secured Australia country qualification for the Finn class for Rio 2016 at the 2014 ISAF Sailing World Championships in Santander, Spain and represented Australia at the 2015 Rio Test event in August, where he finished sixth. But after both sailors had a challenging World Championship in November with Jake Lilley finishing the event in 19th and Oliver Tweddell in 22nd every event over the next few months will count.

At the European Champs it was Oliver Tweddell who had the upper hand over his teammate in Barcelona. Oliver Tweddell finished 22nd after three top-ten races, but a 50th in the first and a 49th in the last race was less than satisfactory for the Victorian:

“This event was extremely difficult: the conditions were very tricky, the fleet was big, and everyone was sailing really fast.  My results were a mixed bag, I had some very bad races, some okay races, and then some very good races. Obviously it's nice getting the good races, but the bad ones certainly put a dampener on things,” Oliver Tweddell reflected on the week.

“I was trying a few different things around my starting strategy and execution this week, which became clear very early on that it wasn't working for me.  So I switched back to my normal process and that got me back on track.  It was just a shame to end the event with such a poor performance,“ the 25-year old added.

Next up is a training block in Palma, prior to the Princess Sofia regatta, where I will be looking to fine tune a few things and improve my performance there. The main goal for this year is to qualify for the Olympic Games.  I've been working towards it for a while now, so I'm looking forward to the challenges ahead,” Oliver Tweddell said about the task at hand.

Jake Lilley started the event strongly with two 15th places, but a 60th and a black flag saw him drop down the ranks to finish the event in 36th. While it was not the result he had hoped for, the 22-year old Queenslander remains focused on the bigger goals ahead.

“It’s been good to be back in Europe racing against everyone again.  We had a setback with some fairly substantial damage to my boat a few days before the regatta, which we spent a lot of time repairing and trying to make better,” Jake Lilley said.

“The event proved to be tricky for all and unfortunately it didn't go very well for me.  It happens sometimes in yacht racing.  The positive thing is that you learn the most from those experiences and I'm confident the learnings and all the hard work will show over the next few months.  Everything is building towards to the Worlds and ultimately the Olympic Games.

Now I'm straight on the ferry to Palma Mallorca with my training partners and some of the Worlds best to keep moving forward.”