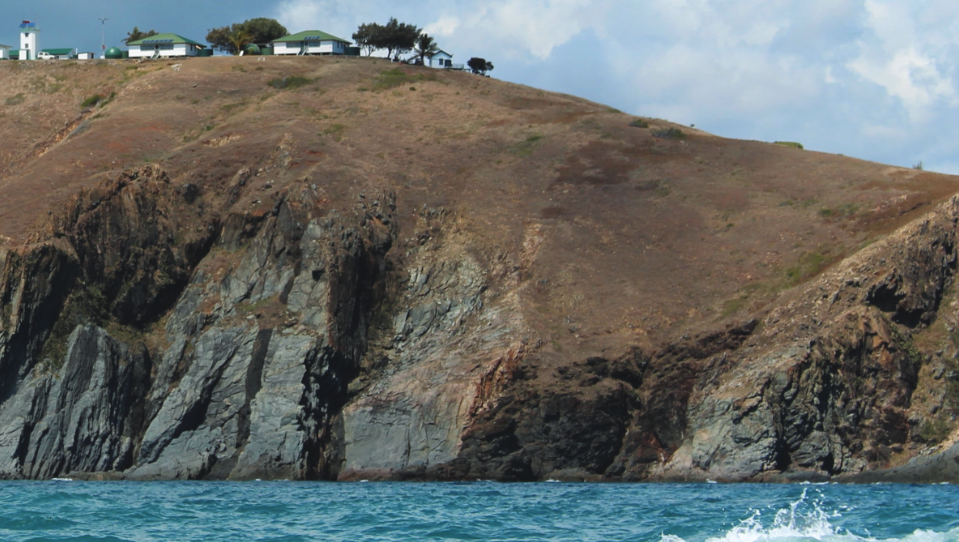 From Gladstone to the Keppels, Anne Wilson shows the Capricorn Coast offers a diverse range of great cruising grounds and even better anchorages.

“Remember, if you are passing through the ships at anchor or coming into Gladstone go to Gladstone Harbour control monitoring on channel 13”. It is the usual practice of volunteer marine radio Gladstone to inform sailors of the need to log in with Gladstone Harbour control and good information it is for all parties to be aware of shipping movements in the harbour area. In past years the skipper and I have observed upwards of 25 plus ships sitting at anchor, each awaiting turn to proceed to a delegated docking area where the loading or unloading of the ship would take place.

But these days, especially with the further development of new terminals and wharves, the number of ships having to await its turn appears to have diminished. The turn around time is much quicker. That does not mean less ships, just a quicker turn around.

In our early years of sailing the region, we would skirt around Gladstone and make for Grahames Creek where the fishing was good and the crabs were plentiful. Sitting at anchor in the creek we felt like we were a million miles from anywhere in some remote, isolated location. We would see the occasional yacht heading either too or from the Narrows.

But time and the development of the wharves for the loading of resources and the gas plant on Curtis Island have forever changed the face of Grahame Creek. It is still a great place to drop anchor, sit out a strong wind warning, maybe if you are lucky catch a fish or perhaps a crab, but the solitude and feeling of remoteness has been inextricably removed. Replaced by the hustle and bustle of commuter ferries transporting workers to and from their various job sites.

The change has led to an interesting opportunity to sail, more generally it is a motor sail past these monolithic ship terminals. Even in earlier years we would hear the ‘clang clang’ of movement as the conveyors would creak along and finally rise up to dump its payload into the bowels of the waiting vessel. These days the sounds have increased to become a 24-hour clang of background sounds.

As we sail past the wharves the loading of ships bound for far away places can be heard across the waters. The names on vessels read like a global atlas: Monrovia, Singapore, New Guinea, Japan, South Africa, Yemen, China, Iran, India the list goes on. A new addition to the ships already frequenting Gladstone is to be the P&O liners who in 2016 will call into Gladstone on a monthly basis Making this central Queensland town of Gladstone a regular stop on their passage making.

While not everyone chooses to call into Gladstone it does offers what is arguably one of the friendliest marinas on the Queensland coastline and my favourite marina. The staff are always very helpful and friendly and  the town is within very easy walking distance. The added bonus these days is the introduction of a courtesy bus put on by the Gladstone Port Authority Corporation, offering easy access to and from the supermarkets.

While it is incredibly easy to be able to provision there can be a slight downside. It has been mentioned that vessels can be covered with a coal-like dust. This has only happened to us twice in 15 years, but it pays to be aware, numerous people leave their yachts for extended periods as it is an easy commute to Sydney or Brisbane by rail, flight or road. The numerous anchorages within Curtis and north facing islands offer an alternative to the general sites listed in the cruising guides. Anchorages are subject to depth and away from marine traffic, just be aware that in any months other than winter one will need midge repellant for those dusk and dawn times.

Doorway to the Narrows

While it is of interest seeing the ships come and go within the port of Gladstone, of greater interest for us has been the changing face of the shoreline and the development on Curtis Island plus the mainland to the west of Gladstone Marina. It is always a topic of discussion as we make our way towards the Narrows.

The Narrows is high on my list of must-do just for the fact that it is so different and I constantly encourage sailors, provided their draft is suitable, to try it. It is an alternative way to remove oneself from overly strong or perverse wind direction on the eastern side of Curtis Island.

Remember, as a tidal area it is approximately 20 minutes difference from Gladstone in tide times, eg. 0900 high tide at Gladstone will make high tide at the Narrows of 0920. Common sense and care must be taken when traversing the area. VMR Gladstone are very helpful in assisting sailors in their passage. The cattle crossing is always of interest, especially to first time transiters.

The Narrows are clearly marked with the appropriate red and green beacons and traversing the area should be done on a full tide to gain the maximum benefit of exiting on an ebbing tide. One can drop anchor anywhere along the southern or northern extremities as there is plenty of depth.

Sea Hill on the northwestern side of Curtis Island is also a great place to make a stop. However, entry to the creek is only available on a half to full tide as there is a sand bar across the entrance. Anchorage out the front of Sea Hill is an option. A visit to shore and the old Sea Hill lighthouse or a walk along the beach allows for the stretching of legs. The fishing and crabbing is generally good.

Our stay at Sea Hill was made even more enjoyable with the catching of two large mud crabs. Big and juicy, we enjoyed every morsel. We usually strike out for the Keppel Islands but sometimes we have turned towards Cape Capricorn and Yellowpatch.

Yellowpatch is a fabulous place to sit out a strong wind warning. For those dubious about entering note that Gladstone VMR will generally assist with waypoints for entering the narrow inlet.It is advisable that entering Yellowpatch should be on a rising or better than half tide. Once inside, safe anchorage can be found.

However, we have discovered that the last storms to hit the Capricorn Coast have washed much of the sand into the creek and has changed the waters to be wider, yet depth more shallow than it once was. I should also note that to anchor to the west of Yellowpatch could result in a sandblasting if anchored in a strong south/south easterly wind as the sand is whipped up by the winds. East of the sand is fine, unless of course there is a south westerly blowing.

To sit on the crest of Yellowpatch at sunset is a joy, but as with most places along the Queensland coastline it is advisable to wear bug repellent, the mozzies and sandflies have been known to abound. Yellowpatch also offers the avid angler a perfect opportunity to gather yabbies for bait to fish or trawl. We dined on fresh whiting and mud crab and only left the anchorage because of a warning by Gladstone VMR that the area would be closed to eradicate wild pigs. Even paradise has its problems.

The anchorage at Cape Cap makes for a good day stop or overnighter provided the wind is in the right direction and reasonably light. Any east or northing and the anchorage becomes extremely rolly.

I believe the Keppels to be the beginning of tropical Queensland. The islands offer numerous anchorages and the waters are generally a vibrant pale blue and crystal clear. It is an island group that offers much for those who may choose to linger or wish to make the Keppels their season’s destination. The beaches are long and white, the walks are varied and many, the anchorages offer a number of possibilities for those not ‘if’ but ‘when’ wind changes.

The old Wapparaburra Haven has come back to life and offers a good bar, tea/coffee meals at reasonable prices.  Even bread can be ordered through the cafe. I have been reliably informed that you no longer have to go over to the mainland to provision, orders can be made to the major supermarkets in Yeppoon and the order will  be shipped over on one of the commuter ferries to the island. Or for a fee you can get a return trip to the mainland to undertake your own chores. Quite different from past years.

anchorages for most yachties. The top side of North Keppel Island also offers great anchorage for winds from the south east through to the north east and you can sit out a 20 knot breeze. Sailing around the Keppels is a delight. It is, unless dead calm, a good sailing area often followed by a comfortable sundowner somewhere around the Keppels.

Both areas are delightful locations for making a passage offshore and form part of the Capricorn Cays National Park.North West Island and Fitzroy Reef form a part of the chain of islands and reefs that many would say starts with Lady Musgrave and Lady Elliot Islands to the south. Then follows through to the numerous reefs out to the Coral Sea, known as the South Reef Area. Both areas offer great snorkelling and safety from some winds but, as is usually the case, discretion should be taken should the winds turn nasty. The islands of this region are a natural and vital breeding area for turtles and birds.

Many sailors wait at the Keppels for a favourable wind to take them south with relatively easy hops down the South Reef area to the top of Fraser Island. Or conversely, the Keppels have been a waiting ground for people waiting for the Shoalwater Bay exercises to be completed before heading north. Thus able to make use of the coastal anchorages.

Cyclone Marcia has gone some way to changing at least one favourite area, that of Yellowpatch. Industrialisation has made its presence felt particularly with the Gladstone area. The lack of development has altered the main Keppel Island. Yet, while there have been some changes, the area remains a fabulous cruising ground and one where sailors should consider a longer stay rather than just transiting through to sail north or head south.

Anne is working alongside Brian to complete a major overhaul of their boat Hybreasail. Then when the provisioning has been completed they hope to cruise north to the warmer waters of the Whitsundays.