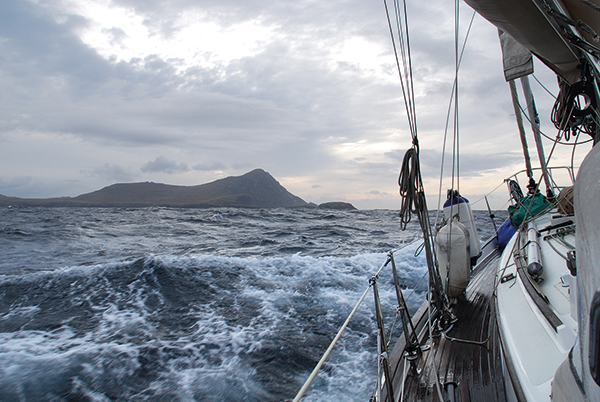 At a latitude of 55.°9, many sailors fear the dangerous conditions that are associated with Cape Horn. Pic - Paul Heiney

The three great capes that mark a non-stop circumnavigation include the Cape of Good Hope, Cape Lleeuwin and the most legendary and feared of all three capes – Cape Horn.

Starting from Europe, the first to round is precisely the Cape of Good Hope. It is the cape that marks the passage from the South Atlantic Ocean to the Indian Ocean and is located at 34 degrees South of latitude.

The second cape that to be rounded is Cape Lleeuwin, which is much less known. This is because in reality those who undertake a circumnavigation pass much further south.

However, from a meteorological point of view it makes no sense to approach Australia to round Cape Lleewin. Going north from the roaring 40s route you risk headwinds and areas of light winds. Those who plan their route will typically head for South East Cape, the southernmost tip of Tasmania located at 43 degrees South. Cape Lleuwin is therefore important merely for its geographical significance, its longitude marks the transition from the Indian Ocean to the Pacific Ocean.

For those planning a non-stop passage, they will have to consider South East Cape in Tasmania first, then Slope Point. This second cape represents the southernmost tip of New Zealand and is located at the latitude of 46 degrees South.

From there the next target is the most legendary of all three capes, Cape Horn. The dreaded cape is actually a Chilean island marking the narrowest point of the Drake Channel. An island nestled between South America and Antarctica, a treacherous place for several reasons. In addition to weather conditions, the sudden rise of the Atlantic seabed from thousands of meters to a couple of hundred can create extremely dangerous sea conditions.

For more and to read about other landmarks that sailors pass while making their way around the world, see: https://globalsolochallenge.com/cape-of-good-hope/