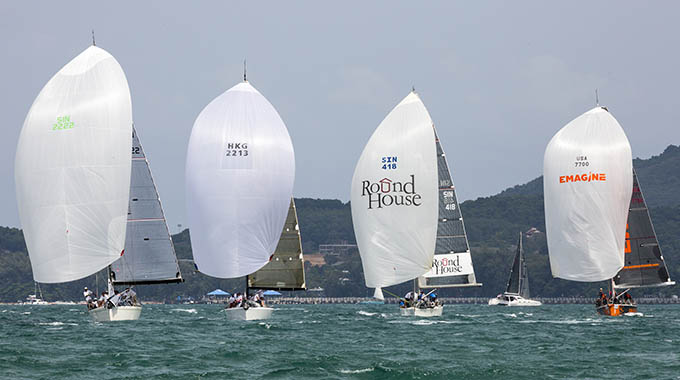 PHUKET, Thailand – Cape Panwa Hotel Phuket Raceweek organisers are looking to expand overseas and grow international participation in the award-winning regatta over the next five years. With international promotions, a series of road trips to key markets and Phuket's growing appeal as a world-class sailing destination, organisers are confident in growing the regatta's international footprint and attracting more charterers for the 2019 event and beyond.

“We have seen a steady increase in the number of charterers competing in the regatta in recent years and this is an area we want to grow further. Australia is an exciting market with a high population of sailors and a strong awareness of Phuket already. This is a market we are investing in for the future growth of the regatta,” said Byron Jones, Managing Director of organisers Media Business Services Co. Ltd.

“We went to Australia and visited a number of Australian yacht clubs last year. While promoting Phuket Raceweek we were also promoting sailing in Phuket, and the response we had was overwhelming. We were welcomed with open arms wherever we went and it was very encouraging to learn how many Australian sailors already knew of Cape Panwa Hotel Phuket Raceweek. It can be a costly exercise for an international crew to fly to Phuket, charter a boat, rent accommodation and compete, but the interest is there and the numbers are growing, and since our trip we have received new entries from Australia which is a great start.”

The 16th edition of Cape Pawna Hotel Phuket Raceweek will take place 17 – 21 July, 2019 headquartered at the stunning five-star Cape Panwa Hotel on the island's southeast coast. Entries are being received from sailors around the world and highlights of just some of the boats entered in the monohull classes include the TP52 Team Hollywood, two Sydney 40’s (East Marine Emagine and Aquari), Farrgo Express and Phoenix, while in the Cruising class Kantus Bride, Chinon – a new entry from Australia – Lady Bubbly and BeauX Esprits have already entered.

Known for its large multihull fleet, organisers expect to split the entries into three classes this year; Firefly 850 Sports One Design, Multihull Racing and Corsair Pulse 600s. Currently entries have been received in all classes and four locally-based Corsair Pulse 600s have been chartered by overseas crews.

“In addition to new faces on the race course, we are proud to welcome a new sponsor this year – Workforce Marine Asia. While new as a sponsor to the regatta, the face behind the company is not; Ray Roberts is well known on the regional circuit and has competed at the regatta numerous times before. He will be competing again this year on his TP52 Team Hollywood and will also be leveraging the event for his business through sponsorship,” added Jones.

Cape and Kantary Hotels' Travel Industry Group Director, Tom Navanukroh, said, “We are very proud to be a part of this thrilling event once more, highlighting as it does the excellence of the sailing opportunities around Phuket. Not only that, but the economic advantages to the island and its inhabitants are immense. We wish all participants good sailing and equally good socialising”.

Cape Panwa Hotel Phuket Raceweek has established itself as a key regatta on the Asian circuit and is the kick-off event for the 2019/2020 AsianYachting Grand Prix. With professional on-the-water race management and an onshore experience second-to-none, the regatta has become a favourite with sailors the world over.

“We are expecting in the region of 40 boats and upwards of 400 sailors, family and friends to take part this year. The event provides an important revenue for Phuket's economy during the island's Summer Season, and we are keen to ensure all participants have a great time on-the-water and also onshore. Accommodation bookings for the regatta are already up on last year and we are looking forward to what we expect will be another excellent Cape Panwa Hotel Phuket Raceweek,” concluded Jones.