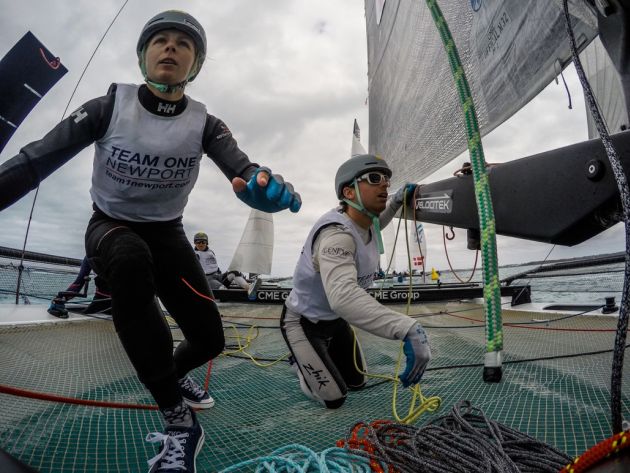 London, UK (23rd February 2016): Taylor Canfield and his US One crew were victorious last weekend in the second of four events which make up the M32 Series Bermuda. However his nemesis on the World Match Racing Tour, Ian Williams and GAC Pindar, pushed the US Virgin Islander hard for the win, the British skipper winning the lighter day 2 of the regatta.

The first day was windy, and Canfield was in his element, showing a clean pair of heels to the seven-boat fleet in five of the eight races. Williams has had less time training in the fast 32-foot catamaran and is still learning the ropes after racing in monohull keelboats for the majority of his professional career. Flipper Wehrheim was top American boat on day one, steering Miss Budweiser very effectively and finishing only just behind Williams on the day one scoreboard, ending the day on a high after winning the last race. Another US sailor Chris Poole had his moments at the front too, steering Riptide Racing across the finish line of race 3 in first place.

After an evening of relaxation at the host venue, the Hamilton Princess Hotel, with the boats moored in the dock just a few short steps away, Sunday dawned to softer breeze to 5-8 knots. Canfield was fast out of the blocks, taking the first three races. But gradually the other teams started to hit their stride. Sally Barkow and the predominantly female crew on board the Magenta Project were third in race 2, and Olli-Pekka Lumijarvi, a match racer from Finland, was also beginning to find some form aboard his chartered boat, aided and abetted by top Kiwi professional match racing talent Phil Robertson.

Don Wilson and the team on Convexity had won the first event of M32 Series Bermuda, but struggled to find the same level of consistency for this second round. At last in race four of the Sunday, Wilson broke through with a victory and did enough to hold on to 4th place overall. Meanwhile Williams was learning fast and won the final two heats to seize the day by a point from Canfield who struggled in the closing stages. As Barkow observed: “The level of competition has stepped up since the first event.”

The former Olympic sailor has been squeezing in as much training and race practice as possible before heading out to Perth for next week’s first match racing event of the 2016 World Match Racing Tour in Fremantle, Western Australia. Barkow is one of 20 world-class skippers entered for what promises to be a frenetic and fast-paced contest, as the Tour moves into a new era of high-speed match racing in M32 multihulls.

As winner of the M32 Scandinavia Series last year and with a season’s hard experience under his belt, Canfield goes to Fremantle as the favourite, although Williams and the other professional match racers will take heart from the fact that US One didn’t have it all their own way in Bermuda last weekend.

Bermuda is a proving to be a perfect warm-weather venue for M32 racing, sailing on the Great Sound, the very same stretch of water that will host the America’s Cup next year. Indeed the M32 fleet was briefly interrupted by a foiling fly-by from three Cup teams, Oracle Team USA, Artemis Racing and SoftBank Team Japan. With all the interest in high-speed multihull racing, the M32 is perfectly placed to give keen sailors, professional and Corinthian, the chance to enjoy the thrills without too many of the spills. As Flipper Wehrheim commented at the end of his high-octane weekend with Miss Budweiser: “The M32 is a great platform – very safe, very fun, very affordable.”