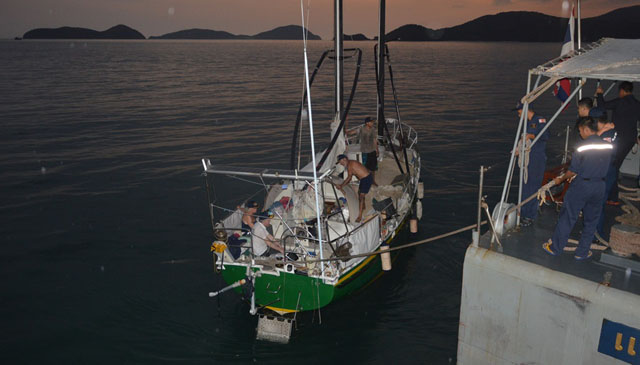 The Kiss is taken in tow by the Thai Navy. Photo RTN.

Four people have been rescued by a cargo ship after the mast broke on the yacht they were sailing. The motor also stopped working and a jury-rigged sail tore. They were adrift for five days.

Maryse Doyer, 68; Jaques Doyer, 63; Andre Belzile, 73; and Colin David Osmond, 37, were rescued and brought on board the cargo ship MV Kota Teguh. The crew provided them food and water, and radioed the Royal Thai Navy for assistance.
It appears that the four people were on a charter yacht as the Kiss is Thai registered. The yacht was towed back to the Navy port in Cape Panwa and the rescued sailors were taken to Vachira Phuket Hospital.