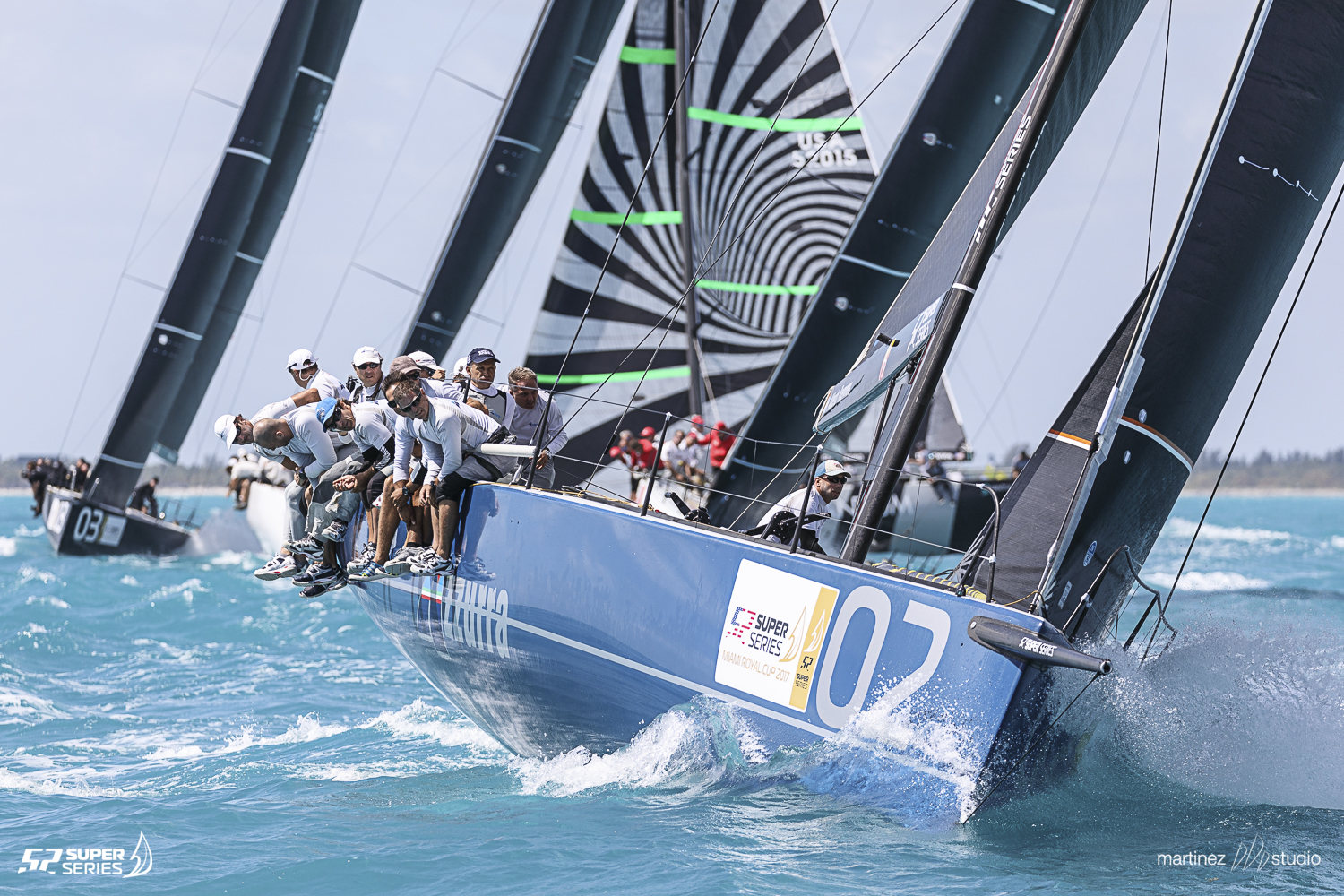 Scarlino, Italy – The TP52 World Championship roll of honour paints quite a picture; only three different crews have won the world title since its inauguration in 2008 as an officially recognised world championship.

But when the Rolex TP52 World Championship starts on Tuesday on Tuscan waters off Scarlino, the challenge for the title is more open than it has been for some years.

Azzurra won the Miami Royal Cup title and leads the 2017 52 Super Series, but returns to a complicated, challenging venue where she underperformed last year upon the series’ first visit, ending up fifth in the eleven-boat fleet.

Rán Racing comes to Tuscany looking to improve on her sixth place in Miami and rekindle some of her Key West consistency when the crew took third in the ‘Conch Republic’ in January.

Amongst this trio of past winners, there is no standout favourite.

To those who have closely observed the racing this season, Harm Müller-Spreer’s German-flagged Platoon has displayed all the facets of a team with serious winning potential. Indeed, to some, it may appear only to be a matter of time before the crew, led by John Kostecki, top the podium.

Second in Key West, second in Miami, the hardware and personnel changes that the German businessman owner-driver implemented over last winter have clearly delivered significant improvements.

On his arrival in Scarlino today, the German owner driver was playing down any suggestions they are among the favourites: “We are well prepared, but there are three or four boats that could win, and yes, it would be nice to think we are one of them.

“As we all know though, a lot can happen. What we have seen is that we now have a very good set up and have good trimmers and a good sails and it is all working well, so, yes, it could happen. But we have seen how easy it is to drop five or eight points in one day; we saw in Miami how close we got.”

Müller-Spreer says: “So much is down to the mental approach, and now we have a really strong core with John Kostecki tactician and Dirk De Ridder – they are brothers in law after all – and they have raced thousands of miles over many years with Ross Halcrow, and all of that is working better for us.

“We are stronger because we have better anticipation – knowing clearly what we are doing on the next leg, the next upwind or downwind, and we are going; well especially when it is above eight or 10 knots.”

Tactician, Vasco Vascotto and skipper-helm, Guillermo Parada, arrived in Scarlino buoyed up by a narrow victory in Palma last week aboard the new Maxi72 Cannonball, on which many of the Azzurra crew sail, up against Bella Mente and Momo – on which many other TP52 sailors compete. Notable are Terry Hutchinson and Ian Moore, tactician and navigator on Quantum Racing, who perform the same roles on Bella Mente and several of the Platoon crew on Momo.

“We really like the race course in Scarlino even if we did not get the result we wanted there last year. It gets a real variety of winds from different directions and light breeze and strong breeze, everything, so to have the world championship there is good,” the Azzurra skipper-helm of Parada said.

“We will also be trying to consolidate the lead we have achieved in Miami after our disappointing Key West. That will be key for us. The whole fleet has re-measured so we are really confident of where we are. We have two new sails coming – a new mainsail and one new jib – and we will have had a good training period.”

The pre-regatta training period – up to five days are available to the teams – will have been fully utilised by most teams.

Quantum Racing is fine tuning the integration of new helmsman, Bora Gulari, into their afterguard set up. Miami was Gulari’s first regatta on the tiller and this will be his second.

The crew is looking to maximise their time on the water prior to Tuesday’s start of competition, and had a comprehensive debrief after the second US regatta of the 52 Super Series, which this year aggregates all points from all six 2017 events, in the USA and Europe.

“Miami was not the standard we were after, not by any stretch. We will be working on everything, across the board before the start in Scarlino and plan to have some good practice. We need to start better. We need to be faster on the open course and be smoother around the corners,” Parada said.

The venue is already a favourite for many teams owing to the changeable wind patterns on the race courses day-in-day-out, and the excellent, modern and fully equipped facilities of the Marina di Scarlino.

Developed by Leonardo Ferragamo, the state-of-the-art marina is set below the rolling hills of a beautiful national park. The Tuscan Maremma area overlooking the Elba Island is renowned for these forested hills, for ancient history, art and culinary delicacies, and the Tuscan archipelago.

Scarlino itself is in one of the most sheltered bays in northern Tyrrhenian Sea. It is in the Grosseto Province, some 100kms SW of Florence, amidst some of Tuscany’s best vineyards. The ‘cucina povera’ cooking using fresh natural ingredients is globally renowned,” tactician Hutchinson noted.

Of the race arena Hutchinson, reflects: “It is great venue at this time of year, especially if we get good breeze. It is tricky, it is opportunistic and if we get the wind direction with the breeze coming from Punta Ala, then there is a really high premium on starting. There are a lot of things we have to improve.”

Paying tribute to the amazing efforts of Tony Langley’s Gladiator team to ensure their TP52 is ready in time after being badly damaged in Miami, Hutchinson concludes: “It’s awesome what the Gladiator guys have done. They are a great team and it will be awesome to have them there racing.”

The official practice race takes place on Monday. Scarlino sees the first Coastal Race of the season, scheduled for Thursday, which normally sees the fleet head down to nearby Punta Ala, and back.

As well as being the 2017 Rolex TP52 World Championship, the regatta is the third event of the 2017 52 Super Series. Azzurra has a lead of seven points over Platoon, with Quantum Racing third, eleven points adrift of the lead.

Racing is due to start on Tuesday at 1300hrs local time. Two races are planned Tuesday. Live commentary and boat tracking via the Virtual Eye is available.