New technology is changing the face of sailing, rapidly. It seems that every week a new foiling boat concept pops up or an alternative wingsail product enters the market.

Yet amidst all this development, offshore racing classes are turning one-design to keep costs down and hold onto sponsors.

The post-crisis economy has seen the radical ORMA 60 trimarans turned into the one-design MOD 70, the Mini 650 fleet dominated by production boats, and even the IMOCA 60 changing to one-design keels and rigs.

For the Volvo Ocean Race organisers, the challenge has been to build fleet sizes, both at the start and finish, without losing the thrills of the powerful VO70.

Going one-design was the obvious solution, but the changes don’t end there. Crew numbers have been cut, shore teams are reduced, and the race management has serious control over both the boats and event.

So has the spirit of the ‘world’s toughest crewed race’ been lost? Can a one-design boat really deliver ‘life at the extreme?’ What about technology and development?

As we count down to the October 2014 start, we look at the new Volvo Ocean 65 (VO65), speak to the people sailing them, and consider how things will pan out in the next edition.

The general concept of the VO65 was to eliminate the expensive design, development and build of the Volvo Open 70 (VO70), along with the costly post-launch optimisation.

Safety concerns following the 08/09 edition, where various failures showed boats were pushed too far, also led to this decision. The model for the VO65 was;

This sounds like all the right ingredients for a one-design class, and everyone is aware of how successful one-design can be. Think Laser, Hobie 16, Melges 32, Farr 40.

But scaling up to a 65ft around the world racer, and controlling teams’ desires to improve their boat, is another thing. Events such as the Clipper have proven it’s possible to do this, albeit with low tech designs.

So how, then, do you maintain the extreme spirit of the VO70 in a boat that’s supposed to last two races and not break up along the way? It’s not in the organiser’s interest to produce something on the limit, yet at the same time they can’t be too conservative, read ‘heavy’. Not an easy task.

Interestingly, this challenge was thrown at Farr instead of Juan Yacht Design (who were responsible for all winning VO70s). No doubt their track record of producing competitive and reliable IMOCA 60s and VO70s had some part in this, and the VO65 is a fusion of these two classes.

Crew numbers have dropped to 8 (11 for the women) so the layout is more ‘friendly’ with a big coach roof and deep cockpit offering greater protection.

Reduced crew means a greater emphasis on conserving energy and reducing the effort taken in manoeuvres. This has a knock on effect on cost, as Patrick Shaughnessy from Farr Yacht Design highlighted “conceptually, the new boat has a lot of similar features (to the VO70) and is going to be a very high performance offshore racing boat.

What separates it a little bit from the Volvo Open 70 is that it’s trying to address the cost issue associated with the hardware… so the boat is a little smaller in many of its parameters, which are scaled to try to address cost.”

I jumped aboard a VO65 recently and it felt much like a grown IMOCA 60. Compared to the VO70, everything is simplified – the spreaders are now swept back, the daggerboards are straight, and the deck is very clean.

Fittings are chunkier too and less ‘customised’, you get the impression that most of these boats will arrive in the finishing port on their own bottom rather than as deck cargo.

The satellite communication domes and targa at the transom look oversized and chunky, but hint at the increasing focus on maximising the amount and quality of footage sent ashore. In fact there are five fixed camera positions onboard, some can even be remote controlled.

The IMOCA inspired features continue to the water ballast, where the VO65 gets both forward and aft tanks. The keel-pin axis is now inclined to create more vertical lift and keep the bow up when powering downwind. It’s also this bow-up tendency that makes forward ballast essential to get the right trim going upwind.

To produce enough boats in time for the 2014 race, construction was shared amongst several yards, just as with the MOD 70. Components were built at Decision in Switzerland, Multiplast in France and Persico in Italy then assembled at Green Marine in the UK.

Seven boats were ordered by the race organisation, five of which have already been purchased by teams.

With the aim being to create a safer and more reliable yacht, there is nothing radical about the VO65 when it comes to construction technology. The number of bulkheads has increased from four to eight and this hints at greater structural integrity – there simply won’t be, and shouldn’t be, a massive shore team to make repairs at each stopover.

Equally, the cross section of crew skills becomes less critical when you take away all the mid-ocean repairs so common with the VO70s.

The Rig – back to basics

The VO65 has triple swept back spreaders, a great contrast to the sensitive 4-5 inline spreader arrangements of the VO70s. There are top mast back stays with deflectors, and a fixed forestay on which the J1 is hanked. All other headsails and flying sails are on furlers.

Overall the process of tuning has been simplified, there are less failure points and lower maintenance.  Control lines run aft to the sheltered cockpit, and all of this means that crew need to spend less time up forward. Aside from the hanked on J1, this setup is identical to the single-handed IMOCA 60s.

All sails are designed and built by North Sails at their factory in Nevada, then finished in France and Spain. Strict limits are placed on how many can be used: at the beginning of the race, teams are given 12, eight to be carried onboard, and four spares.

All sails aside from the A3 and storm jib will use 3Di. The boats also receive a ‘pre-race’ set to be used for training.

With all these restrictions, the sail-makers role in the team has been almost eliminated and the focus changed to preserving the existing suit rather than building new ones. The sail inventory is close to half that of the VO70, and this limitation could end up dictating how hard crews push.

The scenario is much closer to the Vendee Globe, where the circumnavigation is completed with one set. Reports on the longevity of 3Di were very positive after the last race (it was used by first and second place getters), yet with the VOR being more than 10,000 nm longer, the technology will be put to the test.

I spoke with Joca Signorini and Pepe Ribes, who among other things, have both competed in the last three Volvo races. Joca is coaching the all-female SCA team and has already racked up a few miles on the new VO65.

His impressions are that “both boats feel similar, since the 65 followed most of the concepts from the old 70. The righting moment is the biggest difference between them. In the VO70, the keel weight was 7.2 tons (fin + bulb). In the 65, this weight is just over 5.2tons.

While the 70 has a lot more power to be handled, the 65 is still a very fast and powerful boat. The inclination of the Keel-Pin axis on the 65 is something you can definitely feel once sailing in certain angles and speeds. It does change the dynamic of the boat.

Pepe added, “in the VO70 keel tilt was fixed at 0 degrees, which made them very sensitive to stacking and very wet. Even in moderate conditions we had to get everything aft to keep the bow up. With the new 65, the keel pin is inclined, it generates a lot more vertical lift when canted.

The bow is up and it´s super easy to sail fast downwind in big seas. But racing with the 65 will be very close and very tough on crews – they will have to push hard all the time. There will be less breakages and the performance of the boats is equal – so it all comes down to sailing fast and making the correct choices.”

On the subject of teams, it’s only Abu Dhabi who is returning from the previous race. The one-design element and downsizing has clearly made the boat/campaign easier to manage, and more attractive for all female teams (SCA) and those from emerging sailing countries like China (Dongfeng).

Joca felt “the biggest difference is that a ‘last minute’ team will still have exactly the same boat and equipment as everyone else. There is also not much or no R&D to be done during the preparation period and during the race. There is a big cost saving there as well.”

As part of their cost reduction efforts, the race organisers are offering ‘The Boatyard.’ This is a shared maintenance facility during stopovers that will attempt to keep the fleet up to scratch and reliable, at a much lower cost.

Experts from all the suppliers, Farr Yacht Design and the yards involved in construction, will be on hand.

Australian Nick Bice is managing The Boatyard and explained, “the new one-design concept extends a lot further than the boat. We’re setting up a shared services centre, even to the extent that all the bases are going to look exactly the same.

So we’re not only turning the boats into one-design; we’re hopefully turning every element of the race into a one-design race.”

Since the race organisers are responsible for the specification of the VO65, the liability aspect is critical. Each boat is fitted with a ‘black box’ which monitors loads and collects instrument data.  Overload events are recorded and when things fail, the reasons are clearer, as is who is liable for the repair.

While ‘The Boatyard’ concept sounds great and really helps keep low budget teams up and running, there is still potential for astronomical campaign spending. Teams can elect to have as many people shore-side as they want, dedicated to maintenance, weather analysis and freeing up the sailors to do what they are best at.

A quick look through the rule amendments online also shows that teams are doing much to improve their boats. Joca elaborated on this: “the Volvo 65 is a new class and boat, so its normal teams are giving feedback trying to improve the boat here and there.

The rule has been made so any changes must be applied to every boat. Before, every team was trying to give emphasis in a certain weather condition during the design and development of their boats.

Now everyone knows that teams will have the same boat and equipment for the race. So a very important variable has been taken away from the equation, perhaps the most important one in the past.”

Racing on an even keel

So while the top speeds and leg times in the coming race may not break records, it seems we have a much better chance of getting a ‘proper’ race, with close competition where the number of starters equals the number of finishers.

From all accounts, the boats are well founded yet still able to deliver spectacular performance. On the water, the difference between the highest and lowest budgets will mean less than ever before, which is exactly what the organisers set out to achieve. 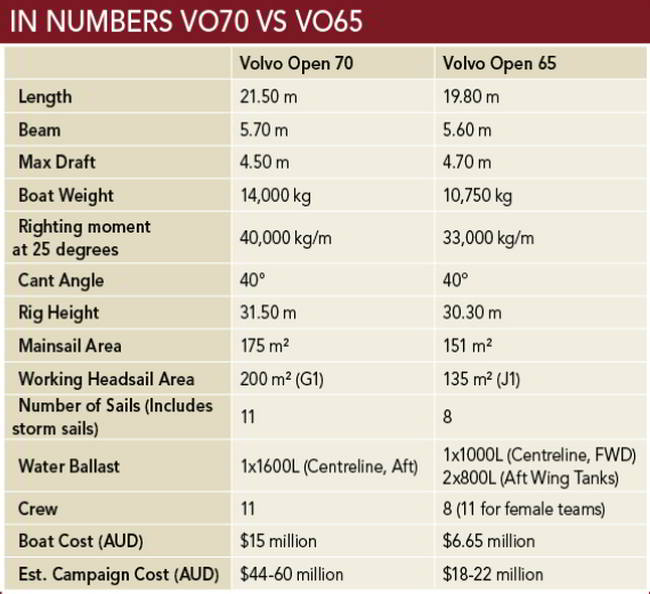 This article was first published in the June-July 2014 issue of Australian Sailing + Yachting.