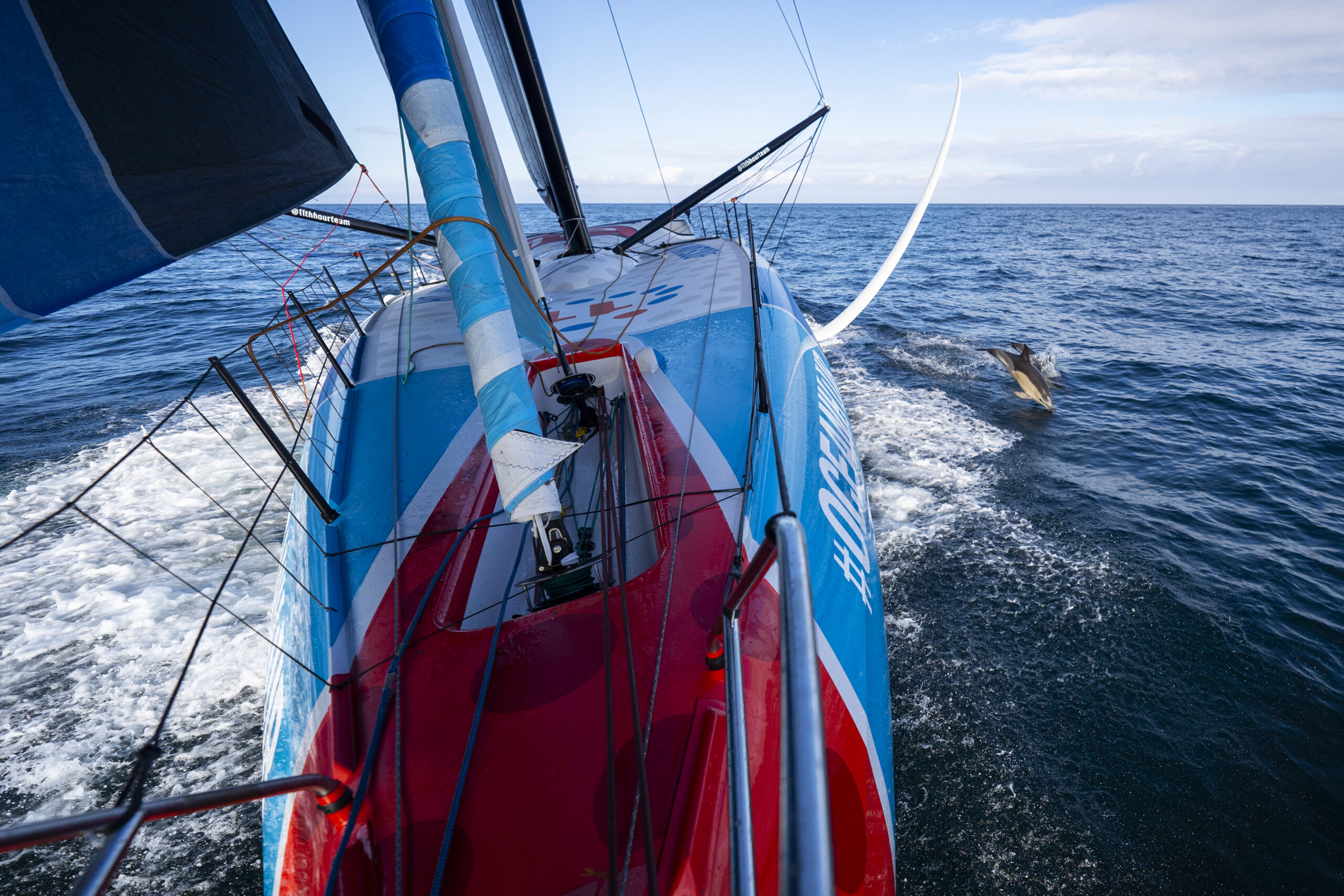 A dramatic rise in the carbon footprint of the build of a performance race boat has been unveiled. Pic - Amory Ross / 11th Hour Racing

A dramatic rise in the carbon footprint of the build of a performance race boat has been unveiled in the Sustainable Design and Build Report from US-based offshore sailing outfit 11th Hour Racing Team, leading to a call to action for the marine industry to align with the Paris Agreement.

Data from the build of the brand new 60-foot race boat, Mālama, has revealed a 60 per cent increase in the build’s greenhouse gas emissions from a previously measured 340 tons [Kairos 2010 – LCA of an IMOCA 60] to 550 tons. This footprint is the equivalent of 1.4 million miles [2.2 million kilometers] driven by an average passenger vehicle – 55 times around the equator.

The Team is sharing these findings with the wider marine industry to bring together boat builders, designers, suppliers and partners to commit to reducing emissions by 50 per cent the industry’s footprint by 2030.

Damian Foxall, Sustainability Manager at 11th Hour Racing Team, explained why there was such a significant increase in the carbon footprint: “Over the past ten years, there has been amazing progress in on-water performance in our Class, but this has come at a high price. Since 2010, the footprint of an IMOCA has increased by almost two-thirds, and is on course to double in the next few years.

“This is an overall trend we see in pretty much any industry driven by performance: we have accelerated too fast in the wrong direction, and put performance ahead of responsibility.

“But this challenge is also our opportunity,” continued Foxall. “Innovation is at the very heart of our DNA in this industry. We need a paradigm shift that places sustainability alongside performance within our Class and race rules, and allows our designers and technicians to make good decisions.”

Team CEO Mark Towill explained how the build program had been structured, with the Team based in the heart of the offshore sailing world, in Brittany, France: “By working from the inside of the industry, alongside the suppliers, the rule makers, the designers, and the builders, we have used our influence, and ultimately our dollars, to be proactively reviewing the way performance boats are built.

“We’ve been pressing for change to the normal way of doing things, innovating and funding new solutions, and asking the question of ‘Why does it have to be done that way?’ while at the same time sharing openly our learnings and recommendations for change,” he concluded.

A critical part of the report’s research was to understand where the emissions arise. This is often easier said than done, as Amy Munro, Sustainability Officer at 11th Hour Racing Team, explained:

“Building a race boat is a complex process involving a huge number of stakeholders and components. This is why we have meticulously measured the impact of every step in the design and build process of our new boat and conducted a full life cycle analysis which helped us to uncover underlying issues. We were then able to address some of these during the build, and also found opportunities and solutions to reduce the overall impact.”

11th Hour Racing Team will be joining a series of workshops, organized by the IMOCA Class, to bring together the performance marine industry to collaborate and learn how to implement strategies to reduce the footprint of new builds. With an unprecedented number of IMOCA boats under construction and boat yards booked up years in advance, a growing number of teams are calling for a shift in the policy around the class rules for performance yachting:

The Team has also drafted a series of recommendations for future IMOCA Class boat builds across energy management, materials resources, the supply chain and waste management.

After more than 18 months in the build shed, the roll-out of Mālama in September 2021 was a seminal moment for the entire team. CEO Towill explained:

“Mālama has become a pilot project for sustainable innovations, and there are many areas of the build where we would have liked to push even further in this space. However, one key learning of this process was the timeline constraints associated with implementing these innovations, such as the use of alternative materials.

“There are significant lead times associated with the research, development and testing of alternative materials in order to have proven solutions that are to the same structural and safety standards of what’s currently being used in new boat builds. Our aim is that this report provides insight into the barriers and opportunities for innovation to be more broadly incorporated going forward,” he concluded.