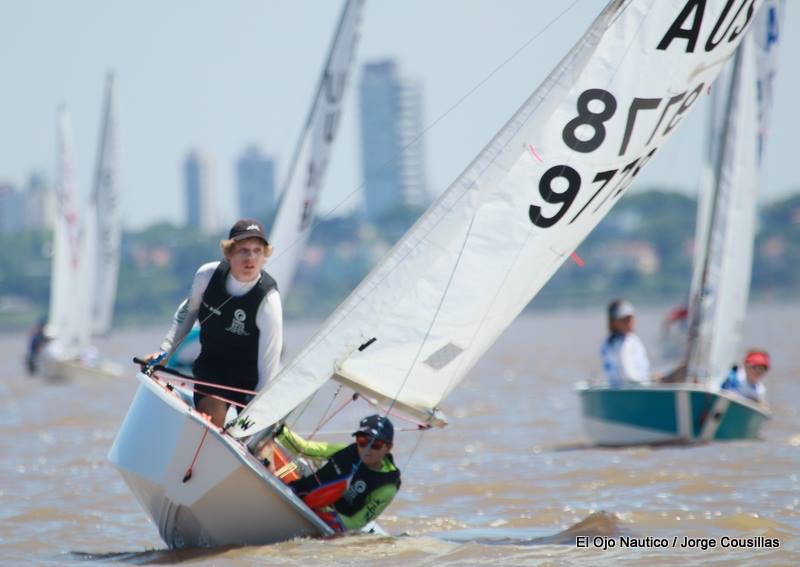 Well let me first say our team is a very resilient bunch. After a disappointing first day they bounced back very well. Most improved their position in a much more positive showing. The few that didn't had quite justifiable cause. More on that later.

We had a meeting with some of our larger crews who were really struggling, our selection trials were 12 months ago and we have some strapping lads and lasses who were much smaller at the time. We chatted about the feasibility of changing things to deal with the unique conditions, mostly the wave pattern and softer winds. These changes include rig setup, sail control, angle of heel and crew positioning. The idea was not to go out and change everything but to set up as normal and then if struggling to maintain contact then to start the processing. This is not an easy thing to do for someone who is familiar with one style. So well done sailors.

All the sailors went better and had good races, it was good to see a few AUS sail numbers in the top 10 and low teens for most of the races. Our best are Alyssa and Mitch Kelsey lying in 12th.

We are having a tough run with the jury, we had one other boat ( Sam Paynter and Gil Casanova) get a yellow flag for excessive helm movement. This is not a huge issue but the second and any subsequent penalties means retirement from that race, ouch!

So our three boats on first penalty need to be careful.

We had two disqualifications in our last race, we were not aware of these as the sailors did not know on water and did not hear hails obviously. The protests are displayed each evening on notice board and there was some confusion about where they were posted. Any way the upshot is we did not attend. We will apply to have them re opened and a new time set. As to the incidents themselves at this stage we do not know anything about how, why and where. So more to follow, if we can get them re opened, well and good. Our attitude to the protest room is the same as out on the water, we will fight as hard as we can, but if it does not go our way, we shake hands and move on.

Today seems to be even lighter in conditions than previous days. So we may be in for a long one. There is a possibility we may struggle to get two races in as wind only will increase later in the day. I am sure the race committee are all over this, it is a long way to start area and we may be held ashore for a while. But we will prepare for any eventuality.