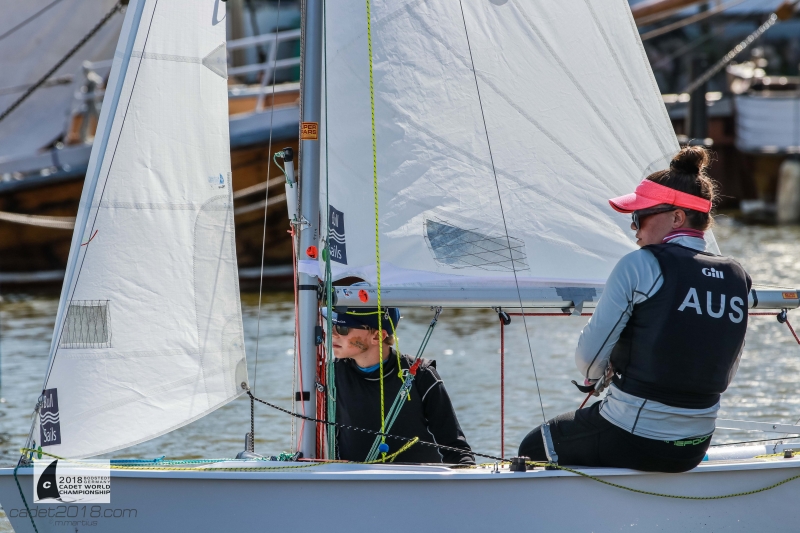 Well the Worlds are done and dusted and what a great regatta, so thank you Germany.

Firstly to the sailing. After being held ashore for the morning, the Race Committee, in their wisdom, decided to launch with the expectancy of sailing conditions arriving in a small window before the time limit expired. This was exactly what prevailed and we got one final race in the afternoon.

This was very good, as to have the last two days with no sailing, would have put a damper on the event. The Australians mostly had an OK race, with Jacob McConaghy and Sam Hooper getting on the podium and Pete Allen/Ash Rawstron, Arch Ibbot/James Gough and Jack Alison/Luca Grove all having good races.

It was a good note to finish on, and I reflected on how much we had improved our light air sailing as a team.

Raised on a diet of fresh winds and afternoon sea breezes, the Australians have always been good in a blow. But the whole team has become much better all-round sailors. We still have some areas that need addressing, but their growth and confidence is reassuring.

Onto the final wash up. Firstly, congratulations to the Argentinean sailors Teo and Ana Zecchin, the new world champions – they sailed very well.

Peter Allen and James Rawstron in ‘Spitfire’ came of age in this regatta, showing fantastic composure and incredible consistency. They finished fifth overall with a strong scorecard. There best place was an eighth and their worst a 16th – a really good effort.

Archer Ibbott and James Gough, the ‘Comeback Kings’. In the appropriately named ‘Little Devil’, they finished the regatta in strong form, climbing up the scoreboard each day. With a heat win and some great sailing from deep in the fleet, they worked up to sixth in the final analysis. Outstanding in light of one race having a 30 percent penalty handed to them in the protest room and having another race abandoned when well placed.

Jacob McConaghy and Sam Hooper were a bit unlucky in finishing just outside the top ten in 13th. With some good results and podium finishes, they were fast and capable. A few bad races saw them drop a bit in the mid-regatta stage, but recover to finish strongly.

Hugo Alison and Grace Cooper in ‘Ikon 10’, one of our youngest crews. It was a great effort to even get in the team at 13 years of age and then to score a top 20 finish! To cap it off, Hugo won the best performed helm under 14 trophy. Grace is going on to skipper. The future looks very bright for these two – so watch this space.

Elliot Hughes and Cate McCoy in ’Anaconda’, another boat with a 13 year old skipper. They were not far back in 23rd. Another one to watch in the future and will only get better. Well done guys; some really good racing.

Jack Alison and Luca Grove in 27th sailed well at times in condition that did not suit them. One of the heaviest crews in an extremely light series. They did as well as could be expected and are delightful pair to coach and be involved with.

Emma Kelly, Ollie Grieve and Alyssa McConaghy did not have their best regatta. Another heavyish crew and fine sailors, but unfortunately the dice did not often roll their way. Exemplified in one race when lying fifth, a large wind shift dropped them back to last! Injury to Ollie halfway through the series meant Alyssa filled in for the last two days.

We were lucky to have two entries in the promotional fleet. Jarrah Harris Moore and Evie McDonald (our team reserves) had some really good results and learned valuable lessons.

The promotional regatta is a really good thing for aspiring sailors. Khan Harris Moore and local German boy, Paul, sailed a borrowed boat. They did well as Khan’s first time in a Cadet (he is very good Opti sailor) and he even beat his big sister in one race!

Now onto the thank you’s. So many to give, I could not possibly list them all, but I would like to point out a few.
Big Alex (aka Alexander Nicolau) a giant of a man in every way. His size is only matched by the size of his heart. He really got this regatta together and ably assisted by his lovely wife, Sylvia, and a horde of enthusiastic volunteers. They could not have done more. Any thank you does not do their efforts justice. Alex I am so privileged to call you mein freund!

To a couple of guys who helped me out on the water; Sam Tiedeman who came in to help out with the weeks training and early stages of the regatta. Then Rob Gough stepped up to the plate. Both were an exceptional help and made my job much easier and the whole team better with their presence and insights. Thanks for the morning coffee as well Goughie.

To the parents and supporters ashore, you have not only given me a great a team to work with, but been so helpful in the lead up and then the regatta. One and all, you can be very proud of what your children achieved.

A last but very big pat on the back to Sam Ibbott, our team manager. Ibbo, old mate, you were fantastic. It is a thankless and time consuming job, but the whole team appreciates your input and efforts. Best of all, they are always delivered in a bright and engaging manner. The cheery disposition and somewhat perverse sense of humour was a highlight and made my job so much easier.

To my sailors (I can still call you that), as we always spoke about, there is so much more to representing your country than the competition. You did yourselves proud and we bounced through the hurdles that arrive, and by the time the sailing had finished, I was so very proud of you all and privileged to have played a small part in your lives. Thank you all!

Signing off with humble gratitude,
Bully