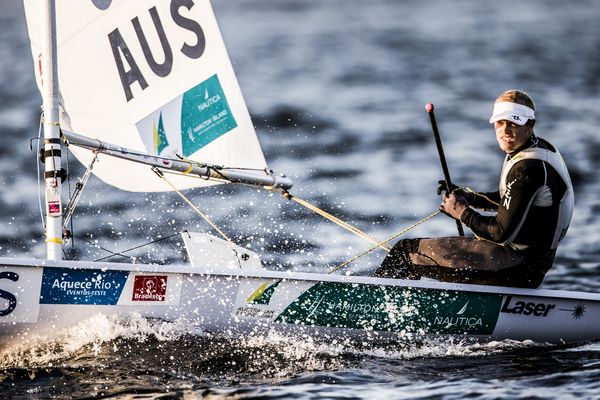 “Waiting for wind” was the theme of the day at the Aquece Rio – International Sailing Regatta 2015 in Rio de Janeiro, Brazil on Tuesday (18 August 2015). Once again racing got underway late for the Australian Sailing Team and when it did, Tom Burton made the most of it by winning the one and only race of the day in the Laser fleet.

Apart from the Laser, only the 49erFX got a couple of races in, while the Finn stayed on the water until late to try and race but with a dying breeze had no luck. Racing was called off for the Men’s 470, while the Nacra17 and 49er were on their scheduled day off.

Laser World #1 Tom Burton had another long day waiting to get some racing in. When the Laser fleet finally started racing in the late afternoon, he repeated yesterday’s feat and made the most of the one and only race of the day posting another race win and moving up from seventh into fourth place.

“It was a long day again. We had a pretty steady breeze on the racecourse at the time but it did get a bit crazy. It was looking quite steady until the second lap when a big pressure difference came on and shuffled the results a little. But luckily I was a little out of reach and managed to get another win in,” Tom Burton said.

“I'm glad to be back close to the front and in the game. The first few races shook me a little and now seeing other people have not such good races gives me confidence it wasn't just me and that the conditions are very tough. For sure I can still win if I sail my best from now.”

It was the fourth day of racing for Burton and only yesterday he managed to jump from 14th into 7th place after winning the one race of the day.

No racing took place in the Finn class with the sailor’s patience tested and everyone hoping for a front to bring in wind for Wednesday’s racing.

“On Monday we already didn’t have a lot of breeze when we went outside the bay to the Copacabana area. We waited for a long time before we eventually were sent in to the Nacra17 racecourse up near the bridge (Ponte) and got one race in before sunset. Today we played the waiting game again. Eventually the breeze came in, they sent the 49erFX out and we tried to follow after them, but it was such a narrow window of wind opportunity that we unfortunately didn’t get a race in,” Australian Finn sailor Jake Lilley about the challenges over the last two days.

About the forecast he added: “Tomorrow we expect it all to be a bit different with a front to come through and we hope to get three races in.”

The Australian 49erFX with Olympic silver medallist Olivia Price (NSW) and crew Jaime Ryan (QLD) were the only Australian Sailing Team to get more than one race in. They had one race on Monday and after some waiting around for the breeze to fill in, the fleet got two races in on Tuesday. The pair posted an eighth and 16th moving up one spot into overall 15th.

“We had two races scheduled on the Medal Race course today to make up for some missed races from yesterday,” crew Jaime Ryan said after racing. “We had to wait for a few hours for the breeze to fill in but when it did it was light, shifty, really tricky as that course is known to be. We had a good first race but didn’t go too well in the second one, but overall we’re happy with how it’s going.”

Price and Ryan are competing at the Test Event with Jaime Ryan filling in for Price’s injured regular crew Eliza Solly (VIC).

Wednesday (19 August) schedule will be adjusted to make up some races and will see all Australian crews back on the water.