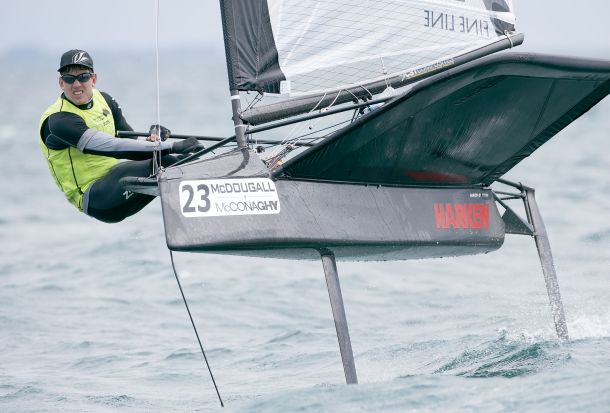 New Zealander Peter Burling continued his near-flawless run on Day 5 of the McDougall + McConaghy 2015 International Moth World Championship being hosted by the Sorrento Sailing Couta Boat Club (SSCBC) in Victoria. With one day remaining to finish the World’s off, Burling showed nerves of steel and control to score a second in Race 9 and then won the remaining three races sailed in shifty south-westerly winds on Port Philip. Winds ranged from 15-20 knots with puffs over 25 in the last of the day.

“I had a great first two races, I was neck-and-neck with Peter (Burling). In the third I had two swims upwind. One was because I had to duck a boat and finished fifth. You go from attacking to a defensive position just like that. Today was awesome though. Perfect conditions really,” Outteridge said.

Staying composed in Race 12, when the wind had freshened and gone further right, Outteridge moved back up for third. For those who did not punch into the right hander all was lost. Everyone quickly learns to keep their heads up all the time.

“There’s a heap of guys sailing well. I’ll be happy if I can just hold my boat together. A few big names fell down the rankings because of breakages today,” he said referring to the likes of Scott Babbage (AUS) and Paul Goodison (GBR).

Outteridge was contemplating what tomorrow would bring. “Looks like it’ll be 10-20 from the north-west. That means big waves. Anything could happen,” he said, keeping Burling at the forefront of his mind, as is everyone else at the top end of the Championship. “I’m leaving now, going for an early dinner and a long sleep ready for tomorrow,” he ended.

“I always want to do better, to win a race. I nearly had the third race, but Peter Burling just slipped inside me. I guess I had a pretty solid day,” McKnight said.

Of tomorrow and whether Burling could be beaten, “McKnight said: “Any of us could bust stuff. Peter Burling can still be beaten. As long as I finish around him and Nathan I’ll be happy,” he said.

Just below the top three, Chris Rashley and fellow Brit, Chris Draper have been thrashing it out. The pair has stayed inside the top five consistently and with just two points separating them, they are in fourth and fifth overall respectively.

Tom Slingsby (AUS) was looking in top form, with unbelievable upwind speed, but did not finish Race 9 and was scored UFD in Race 10, for being inside the start area with a minute to go prior to the start

Babbage was third overall coming into the day. Sailing fast downwind out towards the start area, the Australian said: “A puff hit me and I ran into a moored Couta boat and did some major damage. If I make it out to the course at all, it probably will only be for the last race.”

However, he was able to make the third and four races, but had dropped out of contention down to 17th place after finishing 15th and 10th in Races 11 and 12, unable to recover properly.

Paul Goodison (GBR) the 2008 Laser Olympic gold medallist also broke gear which meant he did not finish Race 9 and was unable to start Race 10, dropping well down to 30th.

PRO Garry Hosie plans to end the championship with four races starting from 1100 hours tomorrow, which will decide the new world champion.