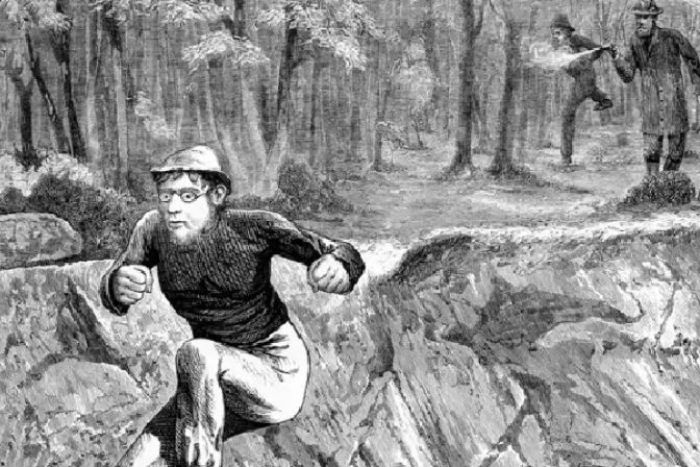 An illustration of Martin Weiberg's escape from police. Supplied: State Library of Victoria.

For more than 140 years, the tale of Martin Weiberg has intrigued historians and Gippslanders. And what happened to the gold he stole?

It's a question that has long concerned ABC audience member and local history enthusiast Rob Waycott, so much so that he requested ABC Gippsland research the topic as part of the Curious Gippsland project, explaining “Martin Weiberg deserves to be better known”.

Weiberg (also spelt Wiberg) was a ship's carpenter aboard the SS Avoca who, in 1877, managed to steal 5,000 gold sovereigns that would be worth millions of dollars today.

A history book published in 1964 by Kenneth W Byron called Lost Treasures in Australia and New Zealand described how Weiberg managed the feat.

“The crime had been planned long in advance. Weiberg had first seen this chance several months before, when he was instructed to do a repair job,” the book said.

“He took the opportunity to obtain a wax impression of the key and cut a duplicate.

“After removing the 5,000 gold sovereigns from one of the strong boxes, Weiberg filled the boxes with sawdust then resealed it so carefully that, along with the other strong boxes, it was transferred to the SS China in Melbourne without the robbery being detected.”

The theft of the coins was not noticed until the SS China arrived at its destination in modern-day Sri Lanka.

Melbourne police investigated the robbery, and a cunning Weiberg continued to work aboard the ship for another five months. He then purchased property on the Tarwin River, east of Inverloch in Gippsland.

This is where the story gets really interesting.

Read the rest of this fascinating story at ABC News.