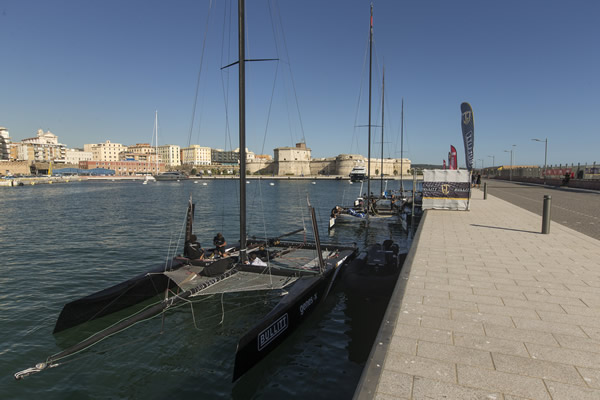 Foiling one design catamaran racing comes to Mediterranean Italy for the first time tomorrow with the fourth event of the Bullitt GC32 Racing Tour, Trofeo di Roma, being held out Civitavecchia, some 50km northwest of the Italian capital. Here at this favourite seaside resort for Romans, the GC32s are berthed within the shadow of the harbour’s imposing Michaelangelo Fortress.

Four days of racing at the Bullitt GC32 Racing Tour’s Italian venue kicks off at 11:30 CET tomorrow. As usual the aim is to hold six races each day on America’s Cup-style courses. These feature reaching starts and finishes, allowing the foiling catamarans to get up to maximum speed, with crews able to show off their tactical and boat handling skills on the windward-leeward legs in between.

Five GC32 teams are competing in Civitavecchia. Coming into the circuit on a high following its victory at the Bullitt GC32 Sailing Cup Kiel is Team Alinghi of two time America’s Cup winner Ernesto Bertarelli. American tactician, Morgan Larson, is looking forward to the racing: “Here we are on the Italian Riviera! We’ll have sun and the forecast shows a decent sea breeze – it is just a matter of how much. It’s a beautiful place to hang out.”

Sultanate of Oman may be leading the 2015 Bullitt GC32 Racing Tour, but after winning the Austria Cup in May, results have been trending the wrong way for Leigh McMillan’s team, which finished third in Kiel.

“It is nice to be down in sunny Italy and we’re looking forward some open water racing here,” said McMillan. “Hopefully we’ll get some decent wind so we can go foiling. It is a great spot for racing, just off the beach. We should be able to get good and close which should be interesting for people watching.”

Compared to Kiel, McMillan feels his team is better prepared. “Things haven’t gone our way since the first event. We feel better prepared here and we learned some good lessons in Kiel. We know that we have a lot of work to do still to understand the boat’s handling and its settings.”

For old hand, Spindrift racing skipper Yann Guichard, it is unusual for him to come to a venue he has never sailed at before: “I am looking forward to racing here – it is a nice, sunny place. I am expecting a sea breeze, normally 10 knots and I hope the sea will be flat.”

And while he sails all manner of multihulls, including Spindrift 2, the world’s fastest offshore multihull, he still looks forward to the thrill of foiling in the GC32. “Every time I am on board with the team it is a real pleasure. We still have some way to go before we get really efficient with the boat, so every time we go out, whether it is training or racing, there is an easy goal to reach. I feel more comfortable with the boat, but there’s still a lot to learn.”

Sebastien Rogues, skipper of the French Team ENGIE is also looking forward to the start of racing. With his offshore sailing background he prefers sailing on ‘open courses’ like the one off Civitavecchia, compared to the confined course on Kiel Fjord last month.  “I think it is a good place,” he says of the Italian venue. “It is sunny and we have had more time than in Kiel for training and to prepare the team.”

Another team to have made crew changes for Civitavecchia is ARMIN STROM Sailing Team of GC32 Class President Flavio Marazzi. Young Argentinian catamaran sailor Pablo Völker is now on board as main sheet trimmer/tactician while British multihull ace Adam Piggott is handling boards and mast.

ARMIN STROM Sailing Team won the Cowes Cup in June, but came last in Kiel. “Our expectations are a bit lower here because we only sailed yesterday for the first time with the two new guys,” admits Marazzi. “But we have a good spirit in the team.”