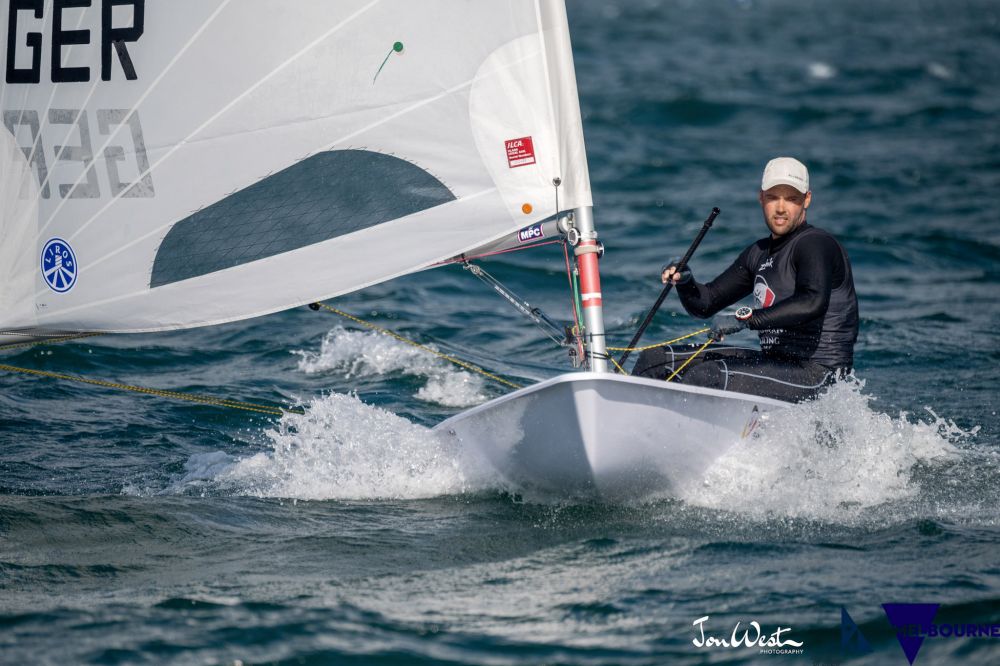 On a day of strong but shifting winds, Philipp Buhl (GER) and Jean-Baptiste Bernaz (FRA) found a little more speed than the rest of their competitors to finish the second day tied at the top of the Laser World Championship standings.

With the 124 sailors split into three fleets of around 40, Buhl and Bernaz each won both their races today to sit on just three points after discarding their worst result from yesterday.

With the discard coming into play after four races, the leader board remains tight. There are just eight points separating the top 10.

Buhl said he was happy with how his speed went. “It was a speed race today. The wind was shifty, so good starts also helped. In the second race I thought I had more speed than anyone, but when I looked around Wearny (world number one Matt Wearn) was right on my shoulder. It was a lot of fun, but exhausting.”

Bernaz echoed the comments about speed, saying he had recovered from a yellow flag (issued by the on-water jury) that forced him to do penalty turns and had used his speed to get back into the lead.

“The second race was a dragster, where we all banged the left corner. But I was leading from the beginning. I am very happy.”

Overnight co-leaders Tonci Stipanovic (CRO) and Finn Alexander (AUS) hold equal third position, two points behind the leaders. Both finished mid-teens in the first race of the day, which they could discard, then followed up with a second placing each in race four.

The big movers were Australians Luke “Swifto” Elliott and Matt Wearn who both discarded a sixth place from yesterday. Elliott scored a win and a second place in yellow fleet while Wearn had two seconds behind Philipp Buhl in red fleet.

Elliott said that qualifying was just about getting into gold fleet. “I had a couple of good races and it’s nice to be racing well, but really it’s the second half (of the regatta) that matters.”

Further down the fleet, the battles continue among countrymen for Olympic selection.

Britons Michael Beckett and Elliot Hanson are separated by a single point, in 10th and 11th respectively while 2016 Rio representative Nick Thompson had a slightly better day, moving up from 29th to 26th.

Thomas Saunders (NZL) holds a five point lead over Rio bronze medallist Sam Meech, but Meech is putting together a very consistent regatta – he has been fifth in all four races he has sailed.

The Hungarian team also has a selection dilemma on their hands, and it’s very personal. The country has qualified for a spot at the Olympics but is yet to select its sailor – which will be one or other of the Vadnai brothers. At this early stage Benjamin, who is ranked 31st in the world, has a healthy 17 point lead over his higher-ranked brother Jonatan.

The Laser format calls for a 12 race series, with sailors being divided into gold, silver and bronze fleets after six races of qualifying.

The forecast for tomorrow is for strong winds, which should ensure that the final two qualifying races can be completed. Unfortunately, the forecast for Friday, Saturday and especially Sunday afternoons is for lighter winds that could be variable in direction. However, this is Melbourne, where weather can change quickly, so race management is not too worried – yet.

With a tight top 10, the coming days should make for fascinating viewing.