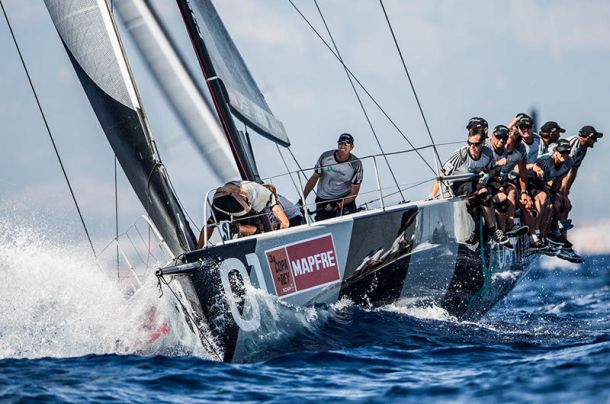 While Vladimir Liubomirov’s Bronenosec ran away with the 30 miles coastal race today, extending their polished record on the coastal tracks of the 2015 52 SUPER SERIES to three wins and a second place, fifth place for Azzurra to Quantum Racing’s second sees the overall lead of the Azzurra team cut to two points.

Some of the 11 crews racing in the 52 SUPER SERIES at Copa del Rey will be glad to see the back of the coastal race at this showcase regatta for it was a long, hot test around a series of windward-leeward loops which tested boat speed, the ability to sniff out the small changes in wind pressure on the 11-17kts sea breeze, and often it was the chance to step left on the upwinds to make the best gains.

The short first opening windward-leeward set the initial pattern but Bronenosec hit the front on the second beat. Fourth around the first windward mark, Michele Ivaldi and the Bronenosec afterguard managed to move left on the longer, 4.1 miles second beat to round the next windward mark with a clear lead which they held to the finish line which was set off the entrance to the Palma harbour.

After their perfect opening day score, two first places, Azzurra did not make the best of starts and were squeezed away from the main group on the first upwind. In contrast Spookie had a peach off the pin end and went out to a lead, but Quantum Racing – with Dalton DeVos steering his one and only coastal race this season – also made a strong opening off the windward end of the line.

Spookie lead at the first turn with Platoon second and Quantum Racing third.

The duel down the run turned out to be between Spookie and Quantum Racing. The 2014 champions and holders of the Copa del Rey title managed to get to the left and squeeze over Spookie, and the two were bow to bow through the gate. Quantum Racing had a small lead up the second beat before Bronenosec stole ahead thanks to their ability to get the premium fast lane on the left. They swept ahead and were never challenged.

Even if there were not too many obvious strategic choices and the legs more often than not were one sided, the hussle and bustle, hammer and tongs scrapping over second to seventh places was intense all the way through the four hours of racing.

Quantum Racing managed to overcome ripping their key downwind spinnaker, holding on gingerly with a tear in the middle of the sail during a nerve racking spell on the penultimate downwind, then sailing with their smaller kite on the next downwind, to earn the second place which closes their deficit behind Azzurra.

Terry Hutchinson, Quantum Racing’s tactician summed up:
”Everybody had their opportunities to win that race. Bronenosec sailed a very good second beat to get themselves into the lead. Platoon sailed well 60 per cent of the time. The gains came in so many funny different ways. We ripped our A2 down the second to last run and had had to cut a halyard so we could not peel. We made it all the way down with a hole about two metres down the centre of it.”

“It was a lot of work for a very well earned, hard fought second place. I can’t fault our guys. This is just day 3 of Dalton and I sailing together and I give them high marks for sticking with it. It was very, very hard.”

The regatta leaders had to take a penalty for fouling Provezza which cost them a place at the time but in fact they rounded the first mark sixth and finished fifth. The Azzurra crew headed to Puerto Portals to investigate some reported damage to the leading edge of their keel but they are fully expected to be back to speed when windward-leeward racing resumes Thursday.