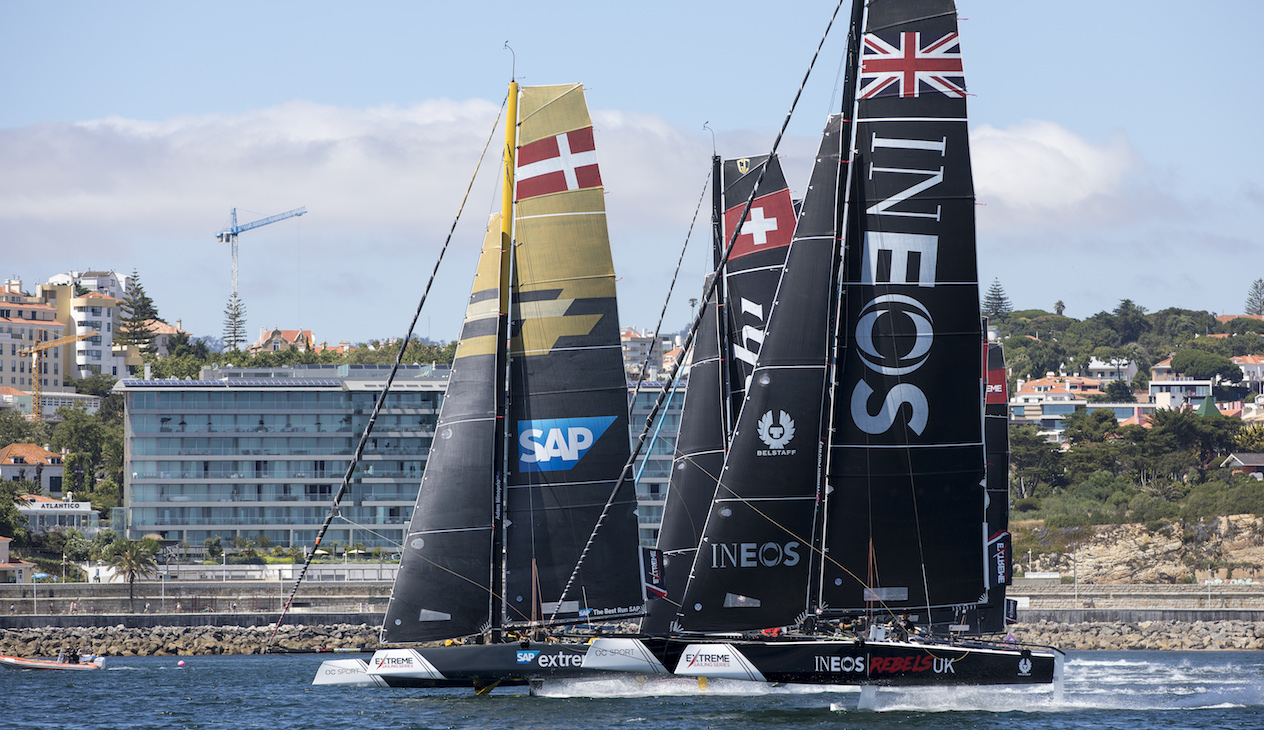 Having led the fleet around the Cascais course throughout the last race, the British squad thought they had it in the bag as they rounded the final windward turning mark ahead of their competitors.

Hot on their heels, Danish crew SAP Extreme Sailing Team rounded several metres behind them, looking set to settle for second as the Brits approached the finish line. However, a classic Cascais gust caught the Danes in the final seconds, propelling them across the course until the two teams were neck and neck.

In a tense fight to the finish, the he teams crossed the line almost simultaneously, with both squads unsure of who had succeeded in taking the race win.

INEOS Rebels UK skipper, Will Alloway, commented on the finish: “Our goal was to make sure we sat on top of SAP Extreme Sailing Team to keep them behind us,” he explained. “When we crossed the line, I wasn’t sure who had it. We were just pushing the boat as hard as we could until we got over.”

Adam Minoprio, helmsman for SAP Extreme Sailing Team, admitted he was determined to snatch the race win from the Brits.

“I thought we ought to try to sneak past them,” he said with a wry smile. “The only way we were going to pass them was by going around them and getting some momentum on the foils, so that’s what we tried to do. I was secretly hoping we had them at the end there.”

It was ruled that it was INEOS Rebels UK who took the top spot in the final race, securing them third place on the podium heading into the last day of the Act.

On the penultimate day of racing in Cascais, some strong results were bagged for Team Mexico. Twice they emerged from the top gate in first place, but unfortunately lost their lead as the races continued. They successfully secured a second place finish in race 21 – their best result of the Act so far.

“It was a very positive day for us,” said an elated Erik Brockmann, the team’s skipper. “Our boat speed was up and we were feeling a lot more competitive. We’re making good progress; we’re going to keep working on it so that these results happen more often.”

There were also improvements on Roman Hagara’s Red Bull Sailing Team as they relished the champagne sailing conditions that Cascais offers up.

Following a string of mid-fleet results in the previous two days of racing, on day three they took their first win, along with three other podium finishes across the day’s seven races.

Sport Director for the team, Hans Peter Steinacher, was pleased with his crew’s performance: “We had a big step up today,” he commented. “When the top four boats are watching each other, that’s our chance to be free. We’re enjoying racing here. We’ll see what happens at the end of the day tomorrow.”

Over on the Flying Phantom racecourse, Idreva Zephyr Foiling once again topped the podium, taking race wins in four of the day’s six races.

As the teams head into the final day of racing in Portugal, Team France Jeune sits in second place, with Culture Foil in third.