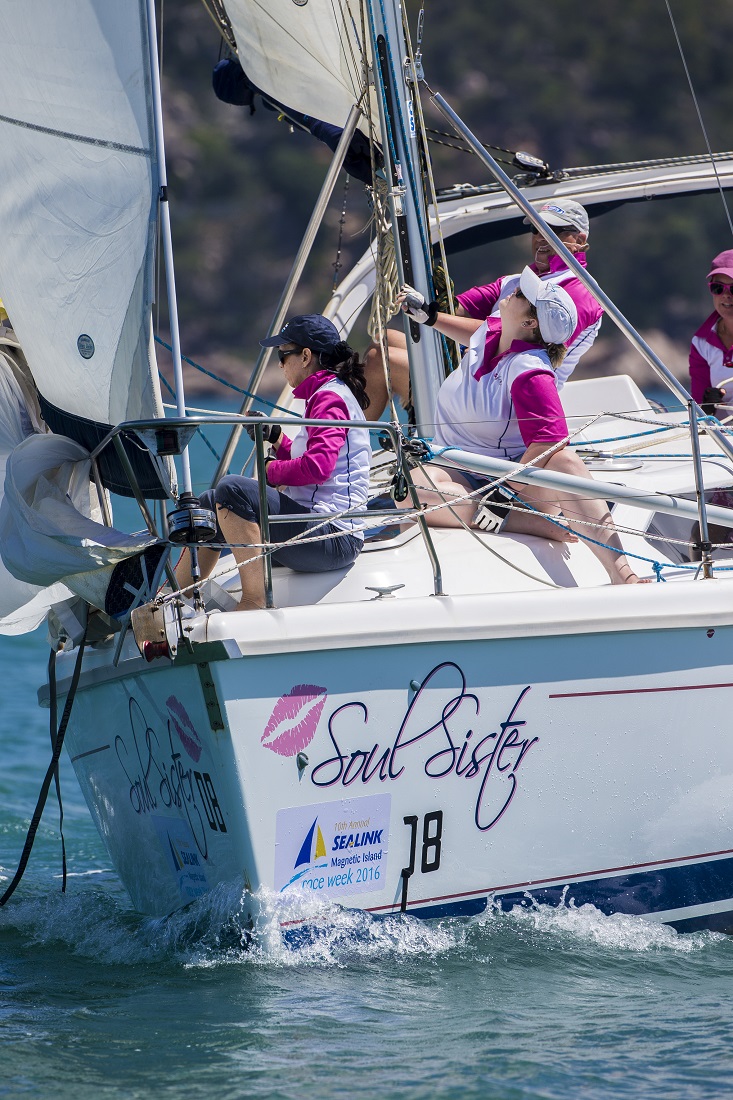 Townsville sailor Donna Dewhurst is happily heading to her 10th SeaLink Magnetic Island Race Week (SMIRW) where she will arrive with the usual all-female crew and her Hunter 310, Soul Sister, for Townsville Yacht Club’s annual event, which opens spring racing and closes the season of major sailing events in Northern Queensland each year.

“This will be my eighth with my boat Soul Sister. I did my first two on other boats,” says Dewhurst of Race Week, to be run from 2-8 September.

“I wish I’d woken up earlier. I was a fulltime mum and hadn’t sailed for a while; then a friend introduced me to a friend from Melbourne who had the yacht Instant Karma entered for Maggie Island. And I thought it was about time I did some sailing again. I had a bloody ball. I forgot how much I loved sailing. You reignite yourself and reunite with old friends.”

Such was her positive experience, Dewhurst bought Soul Sister, named for the song, Soul Sister, by Train. “It was my dream to get a boat, and that song kept my dream alive because the words say everything about how I feel about sailing.

“I have an all-female crew from experienced to never sailed before. It’s great fun. I love the fact that I can give other women the opportunity to believe in themselves. We work as a tight team to support each other.

Soul Sister’s crew joins a handful of others who like to dress for the event. “We play Soul Sister and other songs that suit fellow racers. We do it to help motivate, focus and relax the crew. And we all love dancing,” says Dewhurst, whose crew is well-known for dancing on deck as they head from the marina at Peppers Blue on Blue to the start area – in costume.

“The costumes idea started with Instant Karma – they would do funny quirky things – like wear big, sparkly sunglasses. The next year they sewed poppies onto purple shirts. Life’s too short, so I decided I would do something quirky – we have a dress up bag. It’s just grown.

Soul Sister is entered in Division 4 of the SeaLink Spinnaker Class, where you will find other like-minded ‘sisters’ racing. There is Jessie Goodheart with Constellation, along with regulars Lynda Sawbridge (Helena May), Carol Roberts (Infarrction) and Vicki Hamilton, who arrives with a bunch of fun mainly female friends on Akarana, who also like to play dress-ups.

These women have two things in common; they all hale from different parts of Queensland – and all are in it to win it.

“We race to do our personal best every time.” Dewhurst states. “We’ve won races, and we won our division one year, which tore the house down. Everyone has fun with us and enjoy us, says Dewhurst, who has lived around Townsville most her life: “We moved here when I was 12 and I’ve sailed since.”

And what would Dewhurst share with newcomers to the regatta, now in its 14th year (last year was cancelled due to COVID)?

“I’d say ‘Welcome to the beginning of the best of your future regattas – you will never regret for the rest of your life’. Maggie Island’s uniqueness is the friendly, relaxed atmosphere. It makes you slow down and smell the sea air, makes you appreciate the weather, location, friends – and give you time to reflect.”