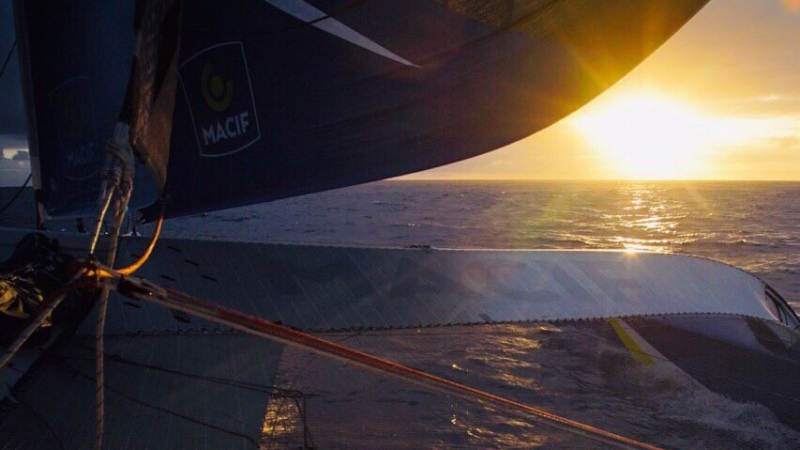 After almost three weeks at sea, the three trimarans still racing on Brest Atlantiques are continuing towards the equator, which they should cross on Thursday. While all the teams have followed a fairly similar route until now, MACIF yesterday decided to head in a more westerly direction, a decision which François Gabart and Gwénolé Gahinet hope will benefit them by the end of the week.

It’s now really time to think about strategy for the rest of the race, not only for the teams on board, who are continuing their ascent on the South Atlantic, but also for their routing experts on land: Marcel Van Triest for Maxi Edmond de Rothschild, Christian Dumard for Actual Leader and Jean-Yves Bernot for MACIF. At 3pm today, MACIF was 650 miles behind the current leader, Maxi Edmond de Rothschild. Choosing to sail in a more westerly direction, 90 degrees from the direct route, could eventually prove to be to their advantage.

In a video sent by the media man Jérémie Eloy, the two skippers explained their decision: “We were faced with two options: the first, to sail almost directly north downwind in fairly calm conditions, which is what our competitors have done, and the second, to cross a high pressure zone in the search of stronger winds. Our aim was to cross this front and make progress sailing towards the west, and then pick up the trade wind again from a better angle.

“Although it’s more complicated, with more manoeuvres and sail changes, this route seems like it will be faster. But it’s all about taking risks and this is the first time since leaving Brest that we’ve really changed our strategy. This makes it more exciting and adds suspense to the race.”

Maxi Edmond de Rothschild, which at 3pm today had a 245 mile lead over Actual Leader, is looking closely at the route MACIF are now following, as Franck Cammas said to media man Yann Riou: “We saw MACIF gybe and head southwest. Obviously, they’re now on a totally different route from everyone else. There’s a front about 1,000 miles away from us, which, if they manage to cross through and come out the other side, may allow them to get ahead. That said, it's not going to be a simple route, they’re going to have to work hard!”

He continues, now talking about their own route: “MACIF’s alternative route doesn't change anything for us, we're not in the same place at the same time and the best route for them may not necessarily be the same for us. It’s not worth following their decision to head southwest.”

All will be revealed by the end of the week….