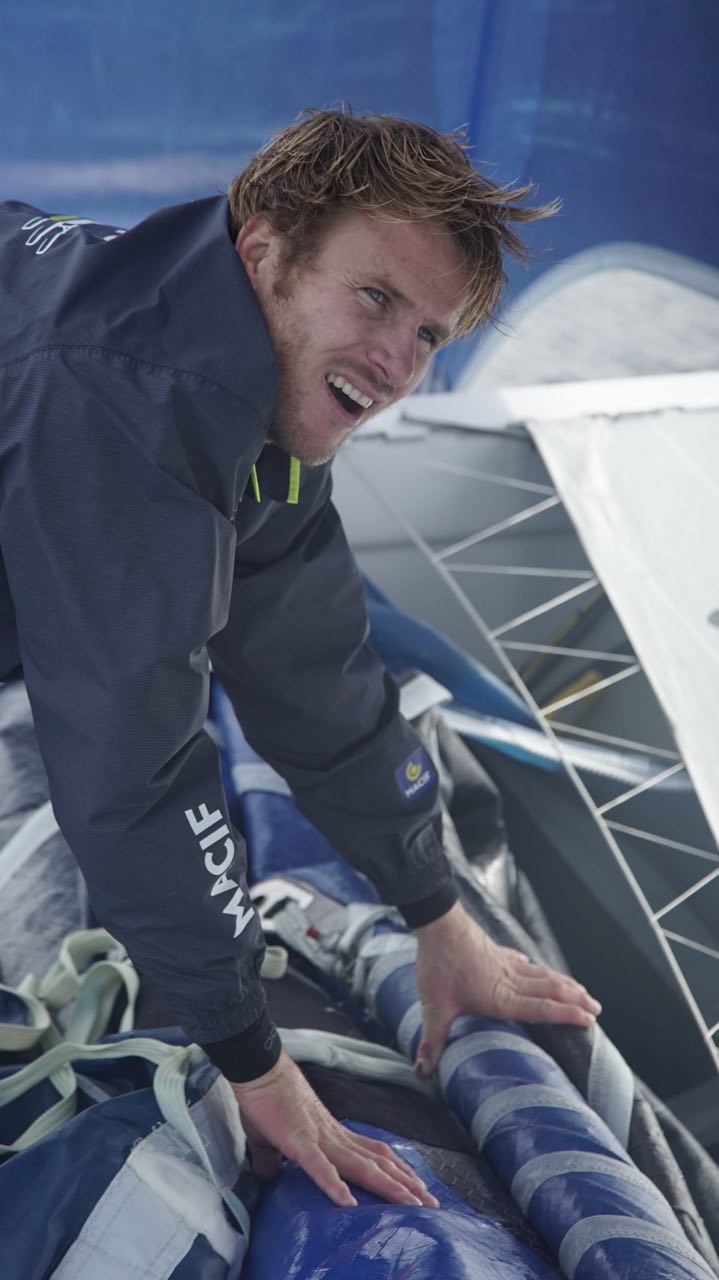 Despite a smooth race for the Ultim 32/23 class trimarans since the start of Brest Atlantiques, in the early hours of this morning, trimaran MACIF hit an unidentified floating object (UFO) which damaged the central rudder and could mean that François Gabart and Gwénolé Gahinet have to make a technical stopover.

The damage however, has not hindered their progress as they continue to race into the Doldrums with Maxi Edmond de Rothschild.

“This Saturday 9th November at 1h30, the crew of the trimaran MACIF noticed the failure of the central rudder following the impact with a UFO while sailing off the Cape Verde Islands,” a press release from the team said.

“The skipper, François Gabart, quickly contacted his shore team to report the damage, indicating that there was no water ingress on board and that the boat remained perfectly manoeuvrable, as shown by the speeds posted this morning,” said the MACIF press release.

At 4pm, the VPLP designed trimaran showed an average of 35.3 knots over 4 hours, still hot on the heels of the leader, Maxi Edmond de Rothschild (Franck Cammas/Charles Caudrelier).

“In flight mode, they shouldn't be too bothered by this damage, because the boat relies on both float rudders; it risks being more handicapped when the wind drops along the Brazilian coast,” said Jacques Caraës, race director of Brest Atlantiques, who was kept up to date with the situation by the skippers and their team last night.

The team is preparing as François Gabart and Gwénolé Gahinet are considering a technical stopover, authorised by the race officials: “A solution is still yet to be reached regarding the boat repairs and ensuring the race continues safely.

“The boat's technical team is therefore currently considering the possibility of stopping over in Brazil to organise this intervention as quickly as possible to replace the part,” continues the MACIF press release.

Before arriving in Brazil, the trimaran is preparing to cross the Doldrums almost at the same time as the Maxi Edmond de Rothschild, on which Franck Cammas and Charles Caudrelier had a small issue during the night.

As Caudrelier explained: “We had a problem with the gennaker swivel, which allows the sail to be furled. It wasn’t working. The tack end of the gennaker had come out of the furling system and was stuck. It was a real problem, because the sail is 400m2, and we arrived in a potential squall zone where this type of incident can have serious consequences.”

With the problem solved, this Saturday afternoon, Maxi Edmond de Rothschild is now starting to feel the first effects of the Doldrums. According to Christian Dumard, weather consultant for Brest Atlantiques, the two leading boats shouldn't really be slowed down.

“They're going in, but conditions aren’t too bad, the exit is 400 miles ahead of them, I think they'll be out by Sunday morning. The Doldrums remain a concern as there are areas without wind, they will have to be vigilant,” he said.

Christian Dumard is less optimistic for the third trimaran, Sodebo Ultim 3 (Thomas Coville/Jean-Luc Nélias), and especially for Actual Leader (Yves Le Blevec/Alex Pella), which should be more restrained: “Actual Leader will probably be slowed down more because of a stormy zone that will cross the Doldrums.”

This was confirmed by Ronan Gladu, media man aboard Actual Leader, in his message of the day: “Once again, the challenge is to get ahead of the storm, for the big crossing of the famous Doldrums.

The door will be open for Edmond de Rothschild and MACIF as it closes on us… In any case, it motivates Yves and Alex even more to “attack” as they say!” Given the smiles of the two skippers as they enjoyed bacon and eggs topped with garlic and olive oil served by Ronan Gladu, this didn't seem to dampen their spirits.