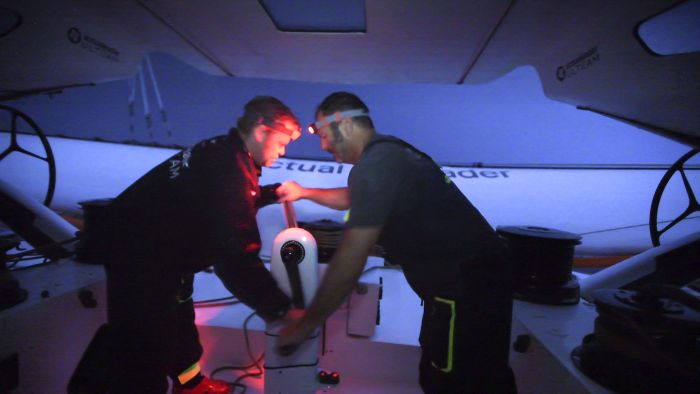 A quarter of the total distance of Brest Atlantiques has now been covered in more or less six days by the four trimarans of the Ultim Class 32/23. The second week of the race promises to be a busy one, with the Maxi Edmond de Rothschild set to make a stop at Salvador de Bahia, and MACIF at Rio de Janeiro. This will allow Sodebo Ultim 3 and Actual Leader to get back in the race.

All of the boats managed to emerge unscathed from the doldrums, which, as the images sent from the media men show, will surely have shaken up the boats and the sailors. The four trimarans of the Ultim Class 32/23 are now enjoying a welcome respite, sailing on a long beam reach down the coast of Brazil. The only boat yet to reach the coast is Actual Leader, who at 4pm today was located around 200 miles off the north east of Brazil.

With a south-easterly wind of around 10-15 knots, speeds this morning were fast, but with trade winds weakening in the afternoon, the leading trimarans, Maxi Edmond de Rothschild and MACIF, also began to slow down, with both boats making pitstops in Salvador de Bahia and Rio de Janeiro respectively.

The Maxi Edmond de Rothschild needs repairs to its daggerboard, which got damaged after colliding with an unidentified floating object. They’ll make the pitstop at Salvador, where they’re expected to arrive early tomorrow morning, with Cyril Dardahsti, General Manager of the Gitana team, supervising all the way from Lorient.

“The technical team arrived last night at Salvador,” he explains. “Today, they need to prepare all the equipment so that when the boat arrives, the repair work can take place as quickly as possible. Of course, it’s not ideal to make a pitstop and it’s difficult for Franck and Charles, who have put in a lot of effort from the start to build the lead they now have over the rest of the fleet. That said, this stop is essential to get the boat back to sailing at its full potential.”

The pitstop for MACIF is equally important: their central hull rudder was damaged off Cape Verde, as François Gabart explained to media man Jérémie Eloy.

“We were sailing relatively fast, at around 35-40 knots, when we hit something pretty hard. There was a sudden loud crash, as we violently hit an unidentified floating object, causing the central hull rudder to break. Located at the back of the central hull, this rudder is used to steer the boat. Luckily, we have three in total on our Ultim trimarans, so we still have the two float rudders as backups. Going straight, we continue to sail fast, but there are times when the boat becomes difficult to manoeuvre, and we come close to veering off track, a little like what I experienced last year in the Route du Rhum after we lost a float rudder.”

François Gabart and Gwénolé Gahinet, in consultation with the MACIF team, therefore made the decision to stop, and chose to carry out the repairs in Rio where they are due to arrive on Wednesday.

“Given the good progress we’ve made and the logistics around this repair, the port at Rio seemed to us the best compromise. A small team will leave for Rio today. The spare rudder was provided by Banque Populaire,” the MACIF team announced early Monday afternoon.

In this case, one boat’s loss is another boat’s gain. These two pitstops will inevitably benefit Sodebo Ultim 3 and Actual Leader, who are looking likely to pass Maxi Edmond de Rothschild and MACIF, despite the weather conditions looking unfavourable for going at high speeds, says Christian Dumard, weather consultant for Brest Atlantiques.

“We can already see that the trade winds are looking shifty, and will continue to be fairly weak and erratic as far as Rio. That said, when they arrive in Rio – probably on Wednesday afternoon for the leaders of the fleet – there will be a strong easterly wind. This means that once they’ve sailed round the Cagarras Islands, they will then face strong winds going upwind. The conditions will not be easy, everyone must start thinking about their strategy and how to manoeuvre their boats.”