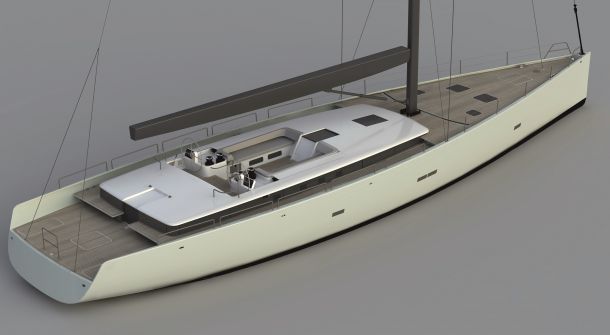 After four decades in the yachting industry, boatbuilder Michael Schmidt continues to design and build yachts to delight boat owners. His new build the Brenta 80DC, a vespa green, 80-foot sail superyacht is being built at his new boatyard, Michael Schmidt Yachtbau.

From pioneering the Canadian C&C brand boats in the 1970s to his race winning Admiral Cupper’s in the 1980s, to founding Hanse Yachts in the 90s, Schmidt has found success over the decades in many forms with high expectations and imaginative outlook.  He is described as passionate and uncompromising and these qualities drive the Brenta 80DC concept.

While growing Hanse Yachts to become the second largest boat manufacturing company in Germany, Schmidt extended his reach to Australia and New Zealand in the 1990s. It was Windcraft Group MD Peter Hrones who partnered with Michael to establish and solidify the brand in the Pacific. The pair have stayed in close contact, brainstorming and bouncing ideas off each other and to push the boundaries of yacht design.

After selling off Hanse Yachts in 2011, everyone expected the main shareholder to be ready for retirement. However, after spending three years sailing the world he had a new vision of what he wanted in a yacht and nothing on the 80-foot market could compete.  So he decided to build his own. “I am building a boat without concession, just beautiful and suiting me. I want it simple, functional and fast.  A special blend of old and new” Schmidt mused at the start of his new project.

He sought a return to the purity of sailing and design, focussing on simplicity. He centered his design around enjoyment, for people who love sailing. The exterior of the boat was designed by Italian Lorenzo Argento of Brenta Design. Shallow lines connected Argento’s idea of a new classic with the aesthetics Schmidt was seeking, combining elements of the past with new and modern concepts. The sculpted raised bulwark creates the look of a flush deck yacht, however, when viewed from the stern, a three-deck level is revealed, including a private access to the owner’s cabin.

Schmidt’s requirements were clear and thoughtful, a large owner’s cabin aft, separate from the saloon area, and a centre cockpit that allows the boat to be sailed by a small crew with ease. Simplicity was the anchoring theme on this light displacement yacht.

Technology on board was kept minimal, as well as the reliance on hydraulics. The Brenta 80DC is executed in a carbon-fibre design to create a bluewater cruiser with increased durability and strength at significantly less weight. Intended to go faster and further than heavier boats of the same size, opening up an entirely new world of destination possibilities for those onboard.

It was Argento who connected architect Sir David Chipperfield with the build. An avid sailor and Brenta 42 owner himself, Chipperfield found instant inspiration from the Bella Figura inspired design. He relied on his experience as a yachtsman to inform the interior aesthetics and Schmidt welcomed his minimalist interpretation. “I was immediately taken by the design. I felt that I understood Michael’s vision and adapted the interior to a comfortable interpretation of the exterior that interacts with the architecture of the yacht”, reveals Chipperfield.

Schmidt’s team for Michael Schmidt Yachtbau include yachtsmen and passionate craftsmen. To bring his venture to Australia, Schmidt has connected again with Peter Hrones. The long standing working relationship will be utilised during the design phase where Peter and Michael and the new owner will work together to create a result.

The Brenta 80DC will premiere at the Cannes Boat Show in June 2015.