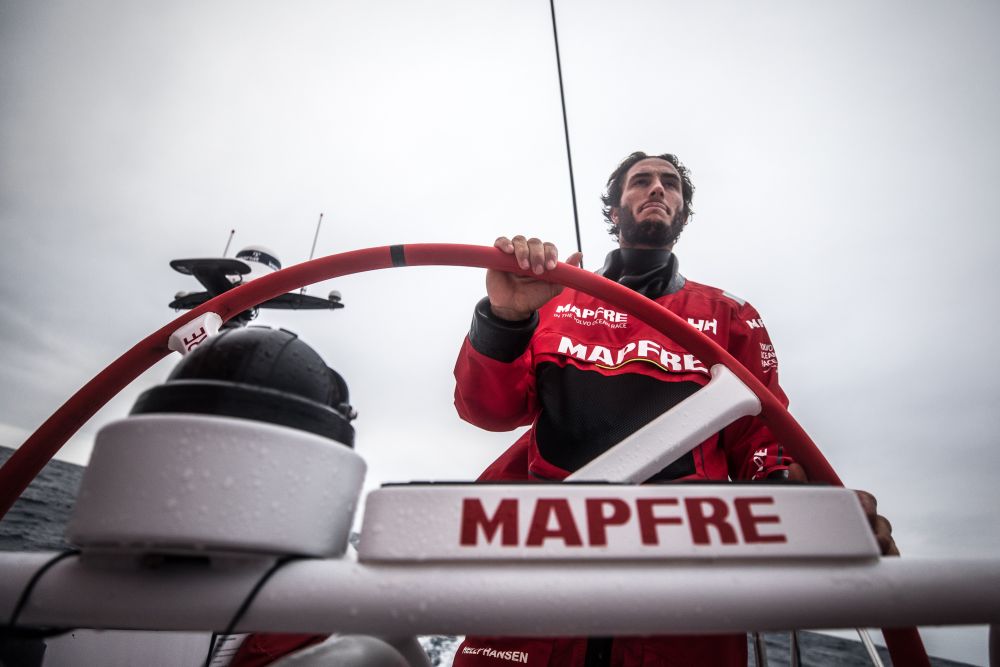 Vestas 11th Hour Racing and Team Sun Hung Kai/Scallywag opted to deploy stealth mode on Thursday as the second leg of the Volvo Ocean Race reaches its climax. With less than 500 nautical miles to go to the Cape Town finish line, both teams chose to hide their positions for 24 hours in one last tactical bid to shake up the standings.

Spanish team MAPFRE continue to lead the seven-strong fleet with a 33-mile buffer over second-placed Dongfeng Race Team at 1300 UTC on Thursday.

With potentially only another 24 hours at sea left for the frontrunners, the action at the head of the fleet is heating up; only 37 miles separate the top three but the chasing pair are running out of time to overhaul the Spanish leader.

Although the leg is coming to a close it is by no means over – and the approach to Cape Town is notoriously tricky. Between their current position and the finish line is a vein of strong winds near 25 knots, but the final miles to the finish could be painstakingly light.

The American skipper of Vestas 11th Hour Racing, Charlie Enright, chose to celebrate Thanksgiving by going stealth at 11.29 UTC, a move that suggests they are planning an assault on MAPFRE and Dongfeng in a bid to make it two wins from two legs.

“We're pushing hard wherever we can,” said crewmember Jena Mai Hansen. “Dongfeng are not far from us, and MAPFRE are 30 miles on our bow. We're all looking at each other seeing who's going to do something different.”

After falling off the back of the easterly-moving cold front Team Brunel have slipped back to 80 miles behind MAPFRE.

It's not where Bouwe Bekking's Dutch-flagged crew want to be – but they haven't given up on a podium spot just yet.

“The pecking order may already be established but we're going to do our best to see if we can change that,” navigator Andrew Cape said. “The problem is it's a 'rich get richer' situation. However it can get tricky right at the end, especially around Table Mountain, and we're not giving up hope.”

Around 250 miles behind Brunel a different game was playing out as team AkzoNobel, Turn the Tide on Plastic and Scallywag battle it out for fifth.

All three were swallowed up by the lighter airs left behind when the cold front passed, leaving them with a massive decision to make – whether to push on directly towards Cape Town or dive south in search of more breeze.

Akzonobel and Turn the Tide on Plastic chose the latter. As for Scallywag, their choice will only become clear when they reappear on the tracker tomorrow.

Prior to going into stealth mode, skipper Dave Witt explained their predicament.

“We're in an extremely difficult situation, which looks like a lose-lose for us either way,” he said. “It's a little bit heartbreaking when we worked so hard to get back from nowhere to here, and now we end up handicapped because of it. I feel like I'm beating my head against a brick wall.”

Sitting at the nav station looking over their options, Scallywag navigator Steve Hayles said: “It's honestly the most complicated thing I think I've seen.”

After more than 6,500 miles of intense ocean racing, Leg 2 could be decided by in the final 500 miles.

The current ETA for the leading boats is late afternoon UTC on Friday.