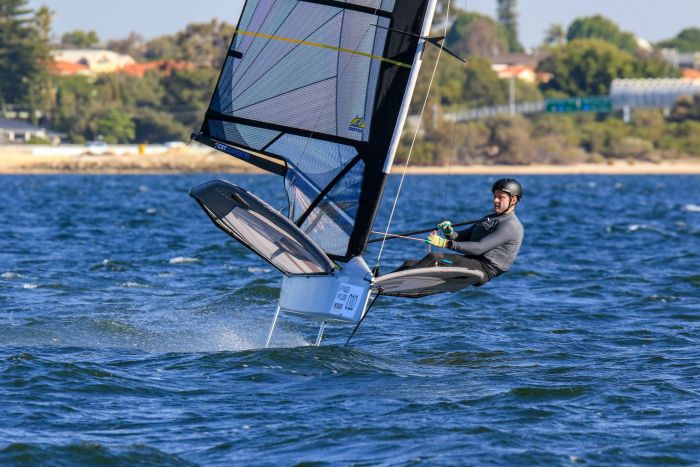 Perth’s Mounts Bay Sailing Club has been swarming with activity over the last few weeks as a number of the world’s best sailors arrive ahead of the 2019 Chandler Macleod Moth Worlds, which run from 9-18 December.

Among the fleet are some of the most recognised names in the sport with Olympic medallists, SailGP champions and America’s Cup veterans across the board.

Some of the sailors headlining the fleet make up a large part of the Australian SailGP team, with Tom Slingsby, Kyle Langford and Kinley Fowler all poised for good results.

A Perth local, Fowler said the event created a big opportunity for bragging rights amongst the three of them, as well as with other SailGP sailors from other teams.

“We are a pretty competitive group on the Australian SailGP Team, so there is definitely going to be some punishment for having a bad regatta,” Fowler said. “In the past we have put a lemon sticker on the sail of the worst performing team mate after each day of racing. I ended up with three lemons on my sail that regatta, so I have a lot of room for improvement from there.”

The event will also see a number of cross-country SailGP rivalries on the water, as United States SailGP helm Rome Kirby competes, along with Perth local and Kirby’s SailGP team mate, Tom Johnson.

Fowler said the event would act as a reunion for many of these top sailors, who cross paths at a range of events around the world, but are coming together in Perth this month with “a world title on the line”.

“A lot of us see each other at different venues all over the place – sometimes on the same team, sometimes racing against each other, and sometimes in completely different classes of boat – but in Perth it will be just you and your boat against the rest,” Fowler said.

And when asked about what made Perth’s Swan River one of the best foiling locations in the world, Fowler said: “30 degrees, flat water, 20 knots of breeze every day, what more could you want?”

As sailors prepare for this epic event, the Swan River has been a hive of activity for Moth sailing, and the recent Western Australian Moth State Championship was a key part of the preparation for many of those racing in the Worlds.

Coming away with a win in that event was Perth local and United States SailGP Team member Tom Johnson, who looks likely to head into the main event in red hot form.

He came away from the event with a near-perfect score card that saw him take out seven of the 12 race wins and never falling outside the top three in the 19-boat fleet. Will Boulden finished behind Johnson in second, while Max Godfroy came away with third place.

The 2019 Moth Worlds kick off on 9 December with measuring and registration for the Australian Championship, followed by two days of racing on 10-11 December.

The main event kicks off on 12 December with a practice race for the Worlds, followed by qualifying racing on 13-14 December, a reserve day on 15 December and finals racing from 16-18 December.