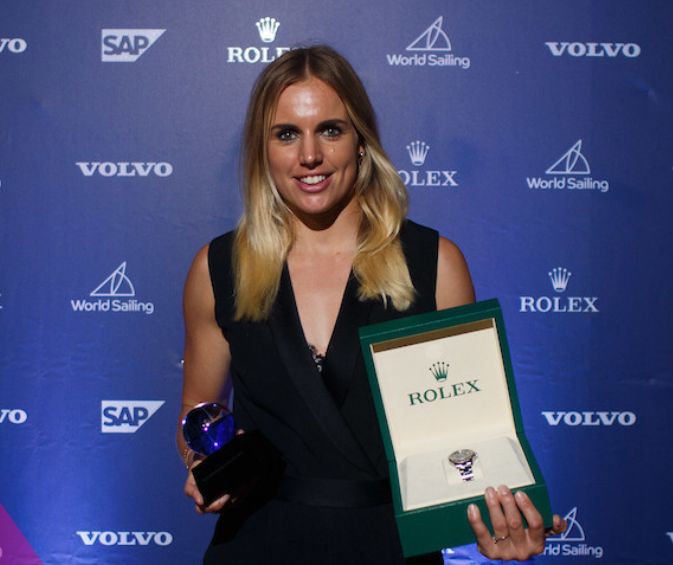 Marit Bouwmeester with her World Sailor of the Year Award.

09/11/2017
Marit Bouwmeester (NED) and Peter Burling (NZL) were the big winners at the World Sailing Awards in Puerto Vallarta, Mexico as they were announced male and female 2017 Rolex World Sailor of the Year.
Held at Patio Los Arcos in Puerto Vallarta, Mexico, the sport of sailing was celebrated in a star-studded evening that welcomed leading sailors and influencers.

The 2017 World Sailing Awards also saw the presentation of the Beppe Croce Trophy and the President's Development Award.

The Beppe Croce Trophy is awarded to an individual who has made an outstanding voluntary contribution to the sport of sailing. Carlo Croce, President of World Sailing from 2013 – 2016 received the trophy.

Stan Honey was the recipient the President's Trophy, an award that recognises an individual for their work in developing sailing.

After claiming gold at the Rio 2016 Olympic Games and then a well-earned victory at the 2016 World Cup Series Final in Melbourne, Australia, Marit Bouwmeester (NED) was overcome with repetitive injuries.

The Dutch racer was unable to race at major regattas throughout the early part of the 2017 but had targeted returning to the sport at her home Laser Radial World Championship in Medemblik, the Netherlands.

Bouwmeester made an outstanding comeback and stormed her way through to claim an emphatic third world title. Just two months later, she claimed the European Championship title ensuring she holds all the current major titles – Olympic, Worlds and European.

In attendance in Puerto Vallarta, Mexico, Bouwmeester was voted the female Rolex World Sailor of the Year by the public, World Sailing's Member National Authorities and guests voting on the night.

An astounded Bouwmeester was almost lost for words upon receiving the unique marble and silver trophy depicting the globe, crowned with five silver spinnakers representing the continents, together with a Rolex timepiece.

“I'm just a girl from Friesland, north of Netherlands,” she commented. “I have always had big dreams and I didn't just want to go to the Olympics but I wanted to win a gold medal and dominate the sport of sailing, being the best sailor there is. People laughed at me because at that time, I wasn't even ranked in the top 20.

“I guess if you enjoy what you do and if you work hard and stay dedicated then dreams do come true. I want to spread the message to the young and the old, to follow their dreams.”

New Zealand's Peter Burling continues to thrill and excite those who watch him sail and compete. Cool under pressure, calm and collected on the water, at just 26-years old, Burling has achieved success that many aspire to, but very few achieve.

With the weight of an expectant nation on his shoulders, Burling never once looked deterred throughout the Challenger Series and America's Cup Match. Even a dramatic capsize, that could have jeopardised the whole campaign, didn't put him off his stride.

Facing off against ORACLE TEAM USA and the bullish Jimmy Spithill, Burling was never fazed and with a hard-working team, spearheaded a 7-1 victory.

Burling was unable to join delegates at the 2017 World Sailing Awards as he is currently competing in the Volvo Ocean Race on-board Team Brunel.

The Rolex World Sailor of the Year Awards, sponsored by Rolex since 2001, are the most prestigious awards of recognition in the dynamic sport of sailing.

Former World Sailing President follows in the footsteps of his father

The Beppe Croce Trophy has been presented to distinguished sailors, rules gurus and designers who have all dedicated an outstanding amount of time to the sport sailing.

The roll of honour is an impressive one and features some true innovators within the sport.

The Federazione Italiana Vela presented the trophy to World Sailing in memory of Beppe
Croce, World Sailing President from 1969-1986. First awarded in 1988 to His Majesty King Olav of Norway, Beppe Croce's son, Carlo Croce, received the recognition at the 2017 World Sailing Awards for his services to the sport.

From 2012 – 2016 he was the President of World Sailing, leading the world governing through a rebranding from the International Sailing Federation to ISAF and putting the sailors at the heart.

Since 2008, the President's Development Award has been awarded to an individual for their work or involvement in developing the sport of sailing nationally or internationally.

Stan Honey received the award from World Sailing President, Kim Andersen, as he has continuously looked forward, developing the presentation of the sport on television as well as being one of the most accomplished sailors.

As a sailor, Honey won the Volvo Ocean Race as navigator, set numerous world records and currently navigates on Comanche.

Throughout his career, Honey has used his engineering background to create breakthrough television graphics that have enhanced the production levels of sailing. In 2013, Honey was responsible for creating GPS based imaging for the America's Cup and continues to refine the technology for wider use. For his efforts, Honey was presented with an Emmy Award in 2013.