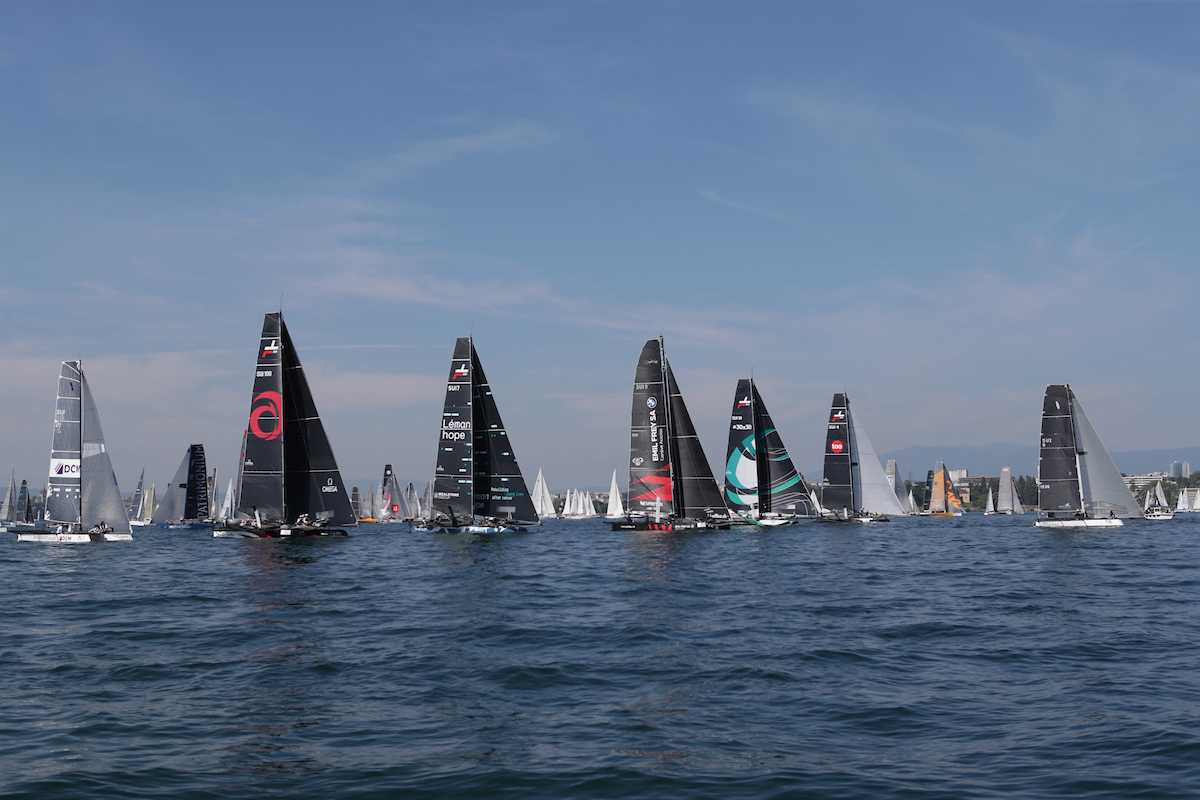 In sparkling conditions on Lake Geneva yesterday morning, the seven high-performance TF35 hydro-foiling catamarans joined 440 other boats of all shapes and sizes for the 82nd edition of the Bol d’Or Mirabaud.

The first half of the 120km race was slow, in a wispy 4 knots of breeze. Led by Ernesto Bertarelli’s Alinghi the teams hugged the shore on the approach to Yvoire. It was here that Alinghi was able to make a break, find enough wind to get up on her foils, and extend away from the fleet as they passed Morges.

A wind hole off Lausanne, however, cut Alinghi’s lead and compressed the fleet as it approached the midway point. Coming from behind, Team SAILFEVER, helmed by owner Frédéric Jousset with Loïck Peyron calling tactics, saw the mistake made by the boats at a standstill in front. They played the mid-lake advantage well and took the lead at the turning point in Bouveret.

Team SAILFEVER’s lead, however, was again short-lived. The TF35 fleet immediately caught up, and on the return to Geneva, there was no decisive breakaway.

After 13 hours of painfully slow progress in light wind conditions that only momentarily peaked above 6 knots, the entire race came down to a five-boat sprint for the finish line, as the forecasted north-easterly gradient wind finally kicked in after dark, and the TF35s took off at 25knots.

With less than two minutes separating the top six boats, it was Bertrand Demole’s Ylliam XII – Comptoir Immobilier that took the TF35 win at Bol d’Or Mirabaud, having raced all day conservatively, keeping in the leading pack but staying out of trouble.

A delighted Demole, the owner/helmsman, explained: “It was a long race but made fun when the wind kicked in after dark. We got off to a good start and didn’t make too many wrong decisions, so it always felt like we were in the game.

“On the way back from Bouveret, we found ourselves with the seven TF35s in a line parallel between Thonon and Rolle, as if we were waiting for the start. The best part of the day was racing into the finish with Realteam Sailing and ZEN Too flying in at 25 knots. It was crazy.”

ZEN Too, owned by Guy de Picciotto, had many hero-to-zero moments throughout the day as they struggled with the patchy light course. However, a decision to tack closest to Versoix before the final straight, gave Picciotto’s team second place in a photo finish with Frédéric Jousset’s Team SAILFEVER which takes third.

Ernesto Bertarelli’s Alinghi started the race well, successfully manoeuvring in the difficult conditions to lead for the majority of the first half. However, they couldn’t quite get enough space in the second half to break away from the fleet and so end the day in fourth.

Unable to lay the finish line Realteam Sailing’s final tack saw them drop from first place on the approach to Versoix to fifth over the line just eight seconds ahead of Spindrift which finished sixth.

Although only seven minutes slower than the leading TF35 after 13 hours of racing, the final position on the leader board goes to Zoulou, which got caught in a light wind patch off Yvoire on the return and didn’t have enough space left on the lake left to recover.