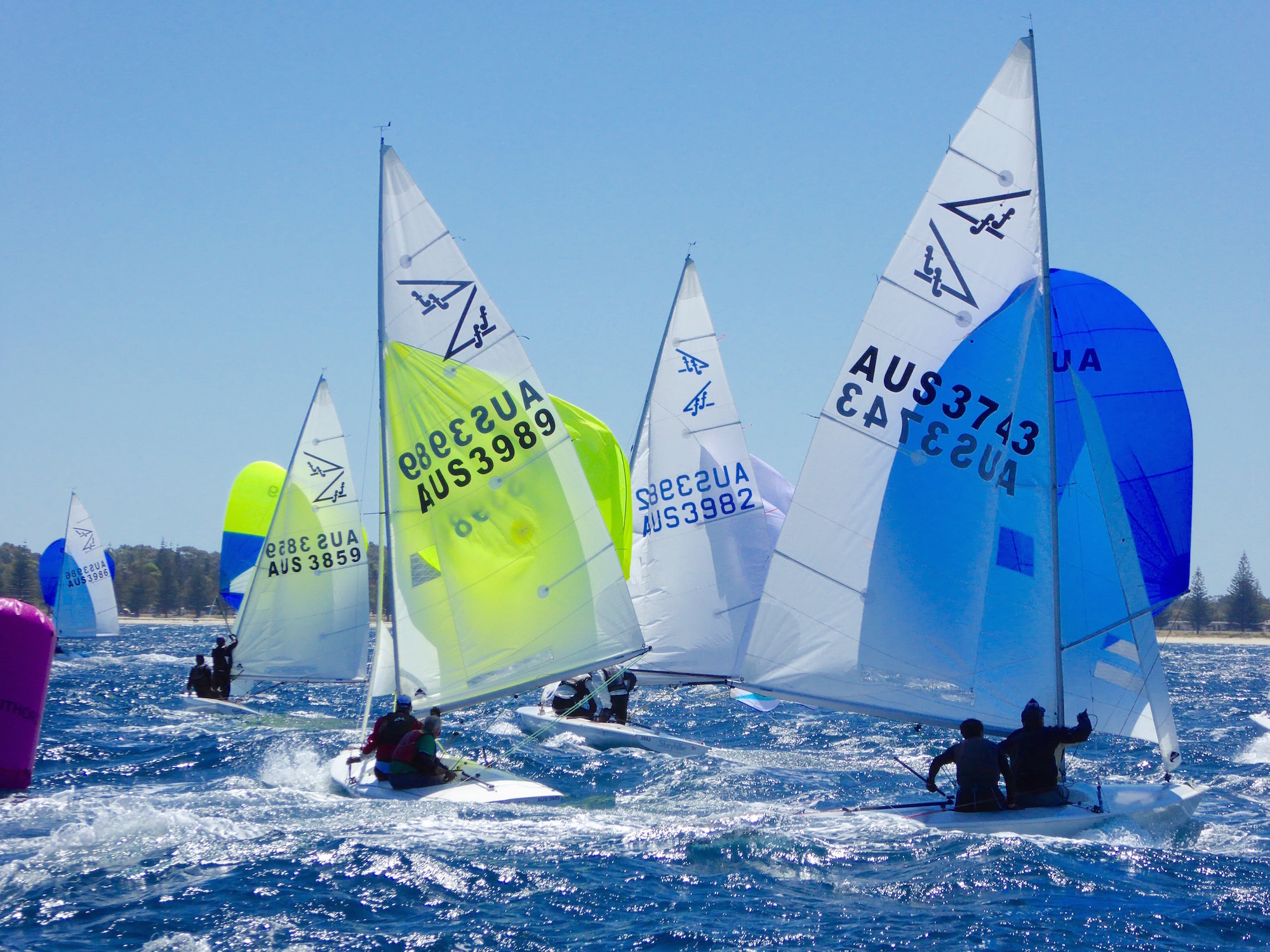 A stunning opening days racing at the 2017 Gemmill Homes Flying Fifteen Australian Championship in Esperance. Clear blue skies and a building E/SE breeze starting from 12 – 16 knots climbing to 22 – 28 knots later in the afternoon with some good wave sets.

A windward/leeward, triangle, windward/leeward and one final upwind course proved quite a testing day for the fleet of 40 boats resulting in some wild rides, some collisions and gear breakages. However one of the most disappointed of all was Esperance local David Swan and Matt Elliot who were judged to be a nose over the start line in Phar Lap to be recorded OCS.

The first upwind was quite an even split with Philippa Packer and Dean McAulley sailing an ‘Absolutely Ffabulous’ first lap to head the fleet from a very tight pack including an on fire John Wilson and Matt Summers (Fast Lane 4) and previous world champions, Alan Bax and Simon Childs (Fforever Young) from the UK.

At the second top mark rounding Wilson and Summers had worked up the beat showing superior boat speed and had a glimpse of an opening but alas too close and fouled the Jerwoods resulting in penalty turns. This dropped them down to the pack downwind but to their credit they battled back into contention on the third lap.

John Wilson explains: “We had a bit of a bad start, we had to tack away because we were buried, but we took it out to the left and had good boat speed so got up to second place at the first mark.”

Matt fills in the details in his clear Scottish accent: “On the second lap we tacked inside the Jerwood’s at the windward mark and were too close so we had to do our turns on the reach leg which put us down to about 8th place. But we were going well upwind and went a bit left and that seemed to pay so we managed to get back up to 2nd.”

The triangle consisted of two very fast reaches with some incredible surfing down the ever increasing waves. The wing mark became a busy rounding as the Flying Fifteens lived up to their name. The slick boat handling of another previous world champion pair, Nick and Janet Jerwood (Ineffable), saw them climb through the leading pack and hunt down Philippa and Dean to nearly slip inside for the overlap, but a last big wave surge enabled the RFBYC boat to maintain the lead but not for long. Philippa admitted after racing that their gybe was a bit hurried and allowed the Jerwoods a window of opportunity to attack. Behind the lead two boats the places were changing on each leg with Alan Bax & Simon Childs and John Wilson and Matt Summers always in the mix.

One last upwind to the finish and by now the breeze was up to 20+ knots with a seascape of white caps. The Jerwood’s once they got in front covered the fleet to the finish but Wilson and Summers chose to separate from the leading pack and go left gaining back lost ground to finish an excellent second. The British pairing of Bax and Childs held on for 3rd with Packer and McAullay slipping to 4th. David Yu and Chris Nelson (Tuffan Up) sailed an excellent third lap to grab 5th.

There were a number of breakages, some ripped sails, a submerged boat and some very tired sailors and with the wind gusts hitting 30 knots and white water, PRO John Taylor (JT) had little choice than to raise AP over A and send the fleet home early without a second race.

Any disappointment was soon diminished as sailors were treated to a seafood extravaganza worth the entry fee alone, hosted by local legends Sally and Casper Castledine.

Day two of racing has up to three races planned with an earlier start as the forecast is similar than today with a building breeze later in the afternoon. Standby for another high octane day of drama.

There is a full schedule of social events for friends and families. More details are available from: www.ebyc.com.au and www.ffiwa.com and the Facebook site: www.facebook.com/FFIWA