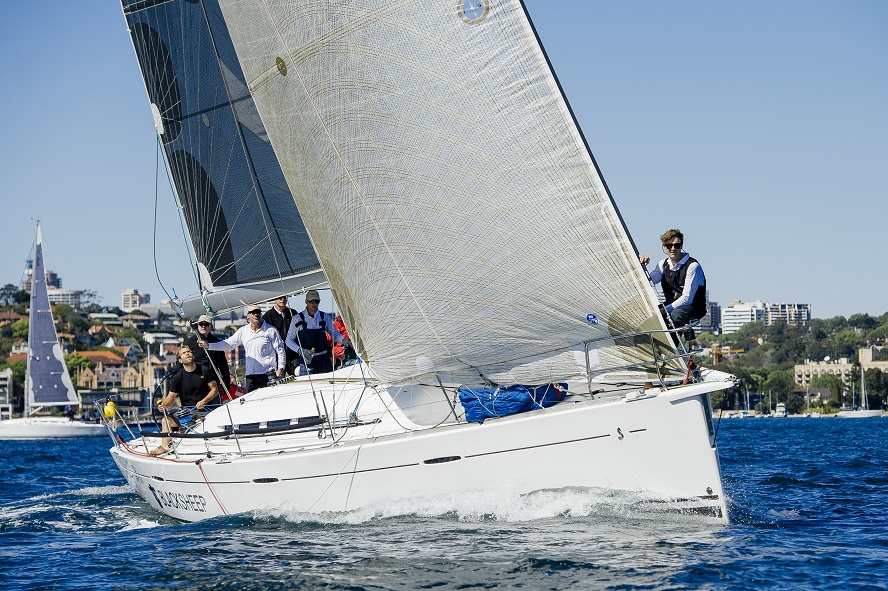 Derek and Martin Sheppard’s Beneteau 45 Black Sheep has claimed overall honours from Chinese Whisper and St Jude, while Giacomo took line honours in the lengthy Newcastle Bass Island Race, which came to a conclusion when Komatsu Azzurrro finished at 3:22:20pm this afternoon.

Last year the tongue-in-cheek named Black Sheep finished the Cruising Yacht Club of Australia’s 200 nautical mile race in third place overall behind Wild Rose and Calibre. This time the Sheppards defied the boat’s name and are chuffed with their first major Blue Water Pointscore victory and to also take out ORCi from Chinese Whisper and Komatsu Azzurro, while St Jude won PHS from Pazazz and Black Sheep.

“It was a long one and a hard one, not without its problems,” Derek Sheppard said. “The sail to Newcastle was OK – the north-easterly swung to the north-west and most of the time it was in the 10-12 knot range. We had a lovely spinnaker run from Newcastle, but it got light around Nora Head. We were able to sneak through and got a break on Bravo (Robbo Robertson’s Beneteau 40) and Pazazz (Rob Drury’s Cookson 12) and we could see St Jude (Noel Cornish’s Sydney 47) ahead of us. We basically used the three as our benchmark,” Sheppard explained.

“We remembered a little lesson we learned from Roger Hickman – you have to win your division first to win the race overall. So we kept our eyes on those three in particular,” said Sheppard, after finishing at 5:51:42am this morning.

With the breeze back in the north-east and building, as much as 28-29 knots, a few came unstuck, including Black Sheep, as Sheppard remembered: “From Stanwell Park to Bass Island the wind was in the low to high 20’s. We changed our A4 to an A5 and had a mega wipe-out near Corrimal.

“We were on our side for a while, trailing the spinnaker behind us. We had to cut the halyard, but we saved the kite. I think there were a few wiping out when they had to gybe back in, and I’m sure some had other problems. I thought it was the end of our chances of winning, so it was a nice surprise to find we were in first place.”

Once around Bass Island, the bulk of the fleet was pounding into the big nor’ easter. “It was uncomfortable on the way home,” Sheppard confirmed, “but when we got into the Harbour, we had a lovely spinnaker ride to the finish line in 8-10 knots. Normally it’s a crawl up the Harbour to the Rushcutters Bay finish line,” Sheppard ended.

Up and down in pressure, the vacillating breeze kept the crews of the 25 starters on their toes and resulted in the retirements of Tony Kirby’s Patrice and Sibby Ilzhofer’s Dare Devil.

Jim Delegat’s V70, Giacomo (NZL) took line honours, nearly an hour in front of Chinese Whisper at 8:19:26pm last evening. At that time, the smallest yacht in the fleet, Shane Kearns’ S&S 34, Komatsu Azzurro, was off Maroubra on her way to Bass Island.

Back ashore, Kearns said he would be seeking redress after standing by a cruiser off South Head this afternoon. If successful, it will undoubtedly lift him up from 13th overall.

“We were in a 30 knot north-easterly and had to pull our sails down – it was awful,” he said. “On the bright side, we hit 18 knots of boat speed on the way back from Newcastle. I took a photo, because I don’t think anyone will believe me. When the wind got to 28 knots, we thought it prudent to take the spinnaker down. When we go to Bass Island, we’d overtaken six boats. It was great.”

Full results will be available on the CYCA website at: http://www.cyca.com.au/sysfile/downloads/2017_Summer/BWPS_2017/series.htm