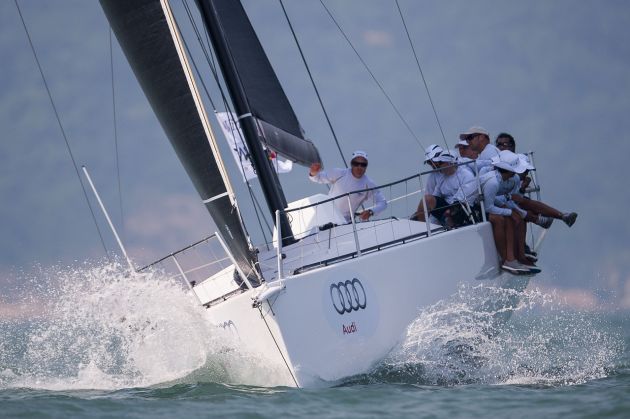 Laying the spectre of the 2013 Hong Kong to Vietnam Race to rest, Steve Manning steered Ker 46, Black Baza across the finish line in Nha Trang in the early hours of Sunday morning to claim both IRC Racer 1 division and IRC Overall title, correcting out nearly three hours ahead of closest rival, RP66 Alive.

Safety was always going to be a prime consideration and, having elected to stay furthest out of all the fleet to benefit from stronger breeeze, Black Baza sustained some sail damage and actually changed sails in order to slow the boat down and ensure that it was manageable in the conditions. Asked what the highlight of the race was for him, Manning responded “it’s hard to say, but probably standing on the back of the boat … correction … helming the boat, flying along at over 20kts”.

With no moon, the difficulty presented by light pollution both from Nha Trang beach and from the fishing boats out at sea was demonstrated when the finishing team struggled to identify the boat until around she was half a kilometre out from the finish.

Fortunately for the finish team, the other boats to finish on Sunday arrived in daylight, making them much easier to spot. Ambush was the first to arrive, unfortunately coinciding with the morning flat calm often seen in Nha Trang, which cost her some time,

Nearly four hours later Zanzibar and EFG Mandrake arrived at the finish after keeping in touch with each other for nearly the entire race.

ARK323 was next to arrive and, while having lost time due to the loss of her propeller at the start of the race, was possibly the most elated crew to finish the race. Skipper and Coach, Robert Heilkema was delighted with the performance of this young, inexperienced Chinese crew, saying “I’ve spent a lot of time working with them prior to this race and to se the guys pushing the boat harder and just keeping it under control and not wiping out, it’s just great to see them taking charge of it.” One of the objectives for ARK323 was to finish the race as their qualifier for the Rolex Sydney Hobart Race in December. Asked if the crew were now fired up for their Australian adventure, Heilkema responded “they’ve probably realised it’s quite a big mountain and they’ve gained a lot of respect for the ocean out there. It’s definitely character building and tough, but I think they’re up to the challenge.”

Overnight, Surfdude and Tipsy Easy arrived together, also bearing crew who were content just to have finished the race successfully and without major damage, rather than gunning for any sort of glory. The final boat, A40RC Avant Garde, arrived in mill-pond conditions this morning, completing the race for the twelve competitors. Perhaps the last word goes to Avant Garde’s owner, Joshua Cole – when asked ‘Why do you do it?’ he responded “about half way through (the race), you think ‘why do I do this?’, then you finish and you think ‘when can I do this again?’!”

Prizes were awarded at a extravagant ceremony including a performance by local singer Thao Trang and a fashion show presented by local swimwear label, Cali Cool. Government and sponsor representatives and local celebrities and socialites, including the reigning Miss Vietnam added to the pageantry of the occasion.”