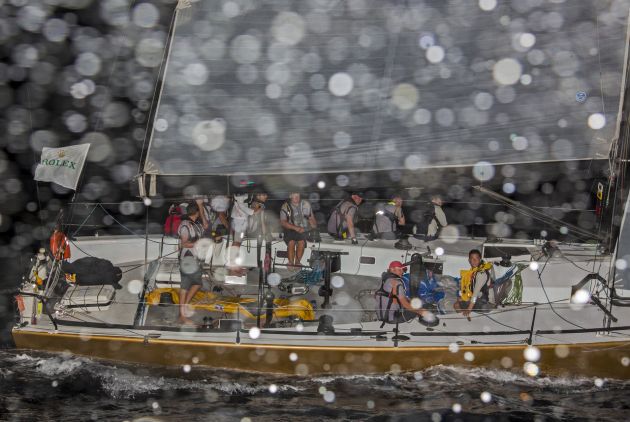 William Liu’s A40RC Seawolf has just finished and provisionally sits in thirdOverall as well as first in IRC Racer 2, which means that their stated aim to “do better than last time (2014)” has well and truly been achieved.

Black Baza finished in the early hours of Saturday morning after just over 60 hours of racing, with crew member Wade Morgan enthusing about the previous 24 hours of racing, saying, “We were coming in hot all the way, which was unexpected … we probably played the middle a little bit to the south and then we had good breeze so we managed to come straight in to the coast without having to do too much fancy work.” Asked if the crew were happy if they had caught Alive on corrected time, Jono Rankine confirmed, “Absolutely! We weren’t expecting that at all,” adding that the high point of the race for the crew was surfing in to the coast at 20kts.

Jono Mahony of Zanzibar also enjoyed sailing down the Luzon coast at 18-20kts, noting that “we finished 8 hours quicker than when we won (IRC Overall) in 2012 even though we hit a sticky patch at the finish which allowed EFG Mandrake to sneak past us – but they do that all the time!”

All the finishers have noted their surprise at the excellent conditions once on open water, although one of the team revealed that Swan 82 UBOX considered retiring 180nm into the race as they had suffered damage to the head of the mainsail which seemed unfixable.

“The crew managed to come up with a solution …. to lash the head and stay in the race, although it limited the load they could put on it. The first night a problem with the foot of the number one cost a lot of time in really tough weather. It was a tough first day, half of the crew were sea sick and had been working hard on the boat leading into the race, so possibly had not had enough sleep. On the positive side, UBOX finished the race and all the crew have taken it as a positive experience, as this race is practice for the team. The ultimate goal is the Rolex Sydney Hobart and, being realistic, we still have a lot of prep to do. It’s good and although we talk about all this damage, it has been a very positive experience for everybody.”

Eight boats remain on the water, with the last finishers expected in the early hours of Sunday morning, brought in by the tail of the strong monsoon which has given Rolex China Sea Race a record year.