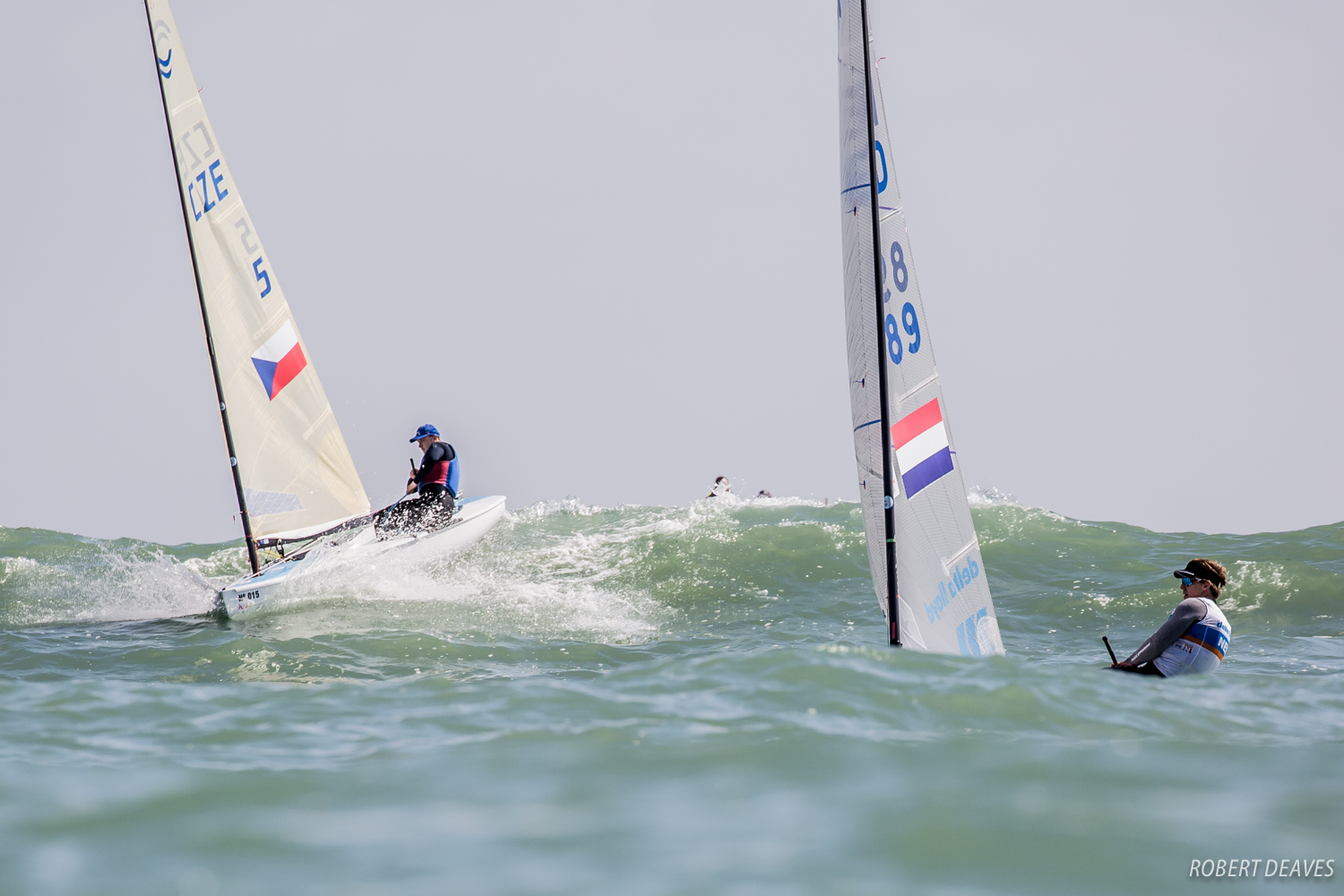 Nicholas Heiner, from The Netherlands, won the only race possible on the opening day of the 2018 Finn European Championships in Cádiz, Spain. Caleb Paine, from the USA, and Facundo Olezza, from Argentina are joint second.

With 30 U23 sailors, it is the largest youth fleet at the Europeans for some time. 2015 Junior World Champion, Ondrej Teply, from Czech Republic leads from Joan Cardona Mendez, of Spain and Guillaume Boissard, of France.

A three metre swell, left over from the storm that caused Sunday’s practice race to be abandoned, made for an interesting day in the Bay of Cádiz, but the light and patchy winds meant that only one race was completed, with the second race abandoned near the end of the first upwind.

Defending European Champion, Jonathan Lobert, from France, thought he should have been leading at the top mark, but Heiner emerged ahead to round just ahead with Andy Maloney, of New Zealand, overlapped with Lobert in third. Heiner maintained his lead downwind in the huge swells, while Paine moved up to second.

The right side paid on the second upwind with Olezza heading further right to move into a narrow lead at the top. However Heiner soon passed him downwind to lead into the finish with Paine crossing third. After racing, Olezza then picked up a one-point penalty for failing to sign out, so ended the day tied with the Rio 2016 bronze medalist.
Nicholas Heiner leads Ondrej Teply through some big chop

Heiner said, “Quite tricky conditions today. Yesterday we had a massive storm and we had still a three metres swell so with the light wind there was lots happening with the sail and in the boat, with rocking going on with the wind changes, and it was really hard to see the pressure differences on the water. So I was just trying to play the fleet. But quite hard conditions out there.”

“The left side was favoured for the first beat and after that it was the right side, but it was really just about keeping the eyes out of the boat and checking the extreme boats on either side to see how they were going.”

This is the Dutchman’s first event since the Finn Gold Cup on Lake Balaton in September 2017. He spent the last three months training in New Zealand.

“It’s been really good and I think the speed today showed we are quite fast, especially on the downwind. I was actually quite happy to have some decent starts and still have the racing skills.”
Andy Maloney
Josh Junior, from New Zealand, hasn’t sailed a major Finn event since the Rio Olympics, and has teamed up with Maloney for the 2020 campaign, both of them being coached by his former adversary, Andrew Murdoch.

Junior, “Me and Andy have been training together in New Zealand for the last couple of months. We are working really closely and Andy has learnt a bit from me and for me it’s great to have someone so close and competitive to train with. We are looking forward to having a good European season.”

On having Murdoch has coach, “It’s great. Obviously Doc was racing against me for the Olympics, but he is an extremely experienced racer and when it comes to big fleet sailing he’s one of the best in the world, so we are really lucky to have him here and he’s going to do the rest of the season.”

Maloney was pretty happy with his first day, “It was great to get back into a big fleet. Over the summer, Josh has fast tracked my development in the class, so I’ve got a lot to thank him for getting me in those positions on my first day of racing in the Finn fleet. So I think we are both going quick out there so it’s about starting well and getting back into big fleets.”

“I am looking forward to sailing in a bit of everything and seeing how I go with the free pumping and that side of the boat. I think we are both just looking forward to getting out here. It’s been a pretty long build up with new boats and getting them ready, so we are just looking forward to racing.”
Jonathan Lobert
The defending champion, Lobert, said, “It was a tricky day with big waves and light winds. The waves were much bigger then the wind. I had a wonderful start and was leading by miles on the left side of the course and I don’t know what happened but fifty metres before the top mark I suddenly lost all my lead, but then I managed to survive to finish fourth, so not too bad for a day like today.”

On his preparation, “I would say almost the same as usual. Of course I am happy I have already won this event before, so I have a little less pressure, so it will just a bonus to win it again.”

He said he made of a mess of the second start so was happy when the race was cancelled. “So tomorrow I will focus a little more on the start to escape from the big fleet.”

On the conditions ahead, “We love to race in big wind and big waves, so will be good fun on the water, so I am really looking forward to have some windy races.”

Three races are scheduled for Tuesday, with the forecast showing stronger winds and rain. The first warning signal is scheduled for 11.00