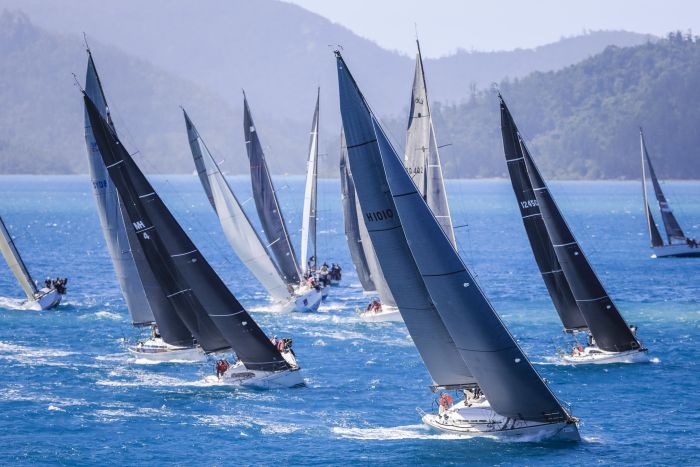 With two days of light airs kicking off Hamilton Island Race Week, the hype building for some serious heavy air racing on day three delivered. Big Tuesday opened with a bang, the southeast winds whistling across Dent Passage and winding up to 37 knots as the morning progressed.

Unbowed by the trade wind crescendo, the race committee raised the AP flag onshore and waited for the downward trend that came late morning. Rather than the planned long and medium distance races, all divisions were sent northward on a variety of courses, and with the breeze dropping down to 15 knots by late afternoon some found themselves overcooked for the easy second-half.

Day three highlights thanks to Broadkast and full results in all divisions.

As the IRC division 1 fleet smoked into Whitsunday Passage, the chasing media boats struggled to keep up in the steep seas. Soon after, Karl Kwok’s MOD70 Beau Geste became the centre of attention as the Royal Hong Kong Yacht Club multihull blasted from Dent Island to South Molle Island, hitting 35 knots at the windiest point in their race – with minimal sails up.

“Halfway down the first leg we hit 35 or 36 knots, we were just taking it easy with the jib rather than the gennaker up and a double-reefed main,” helmsman Gavin Brady said, in all seriousness. “Most of the race was almost in light airs – we were all geared up for 30 knots and next thing it was 15; everyone was pretty overcooked. It was a really good racecourse, true VMG not a lot of reaching. The race committee did a nice job being patient and getting us away.”

Regatta director Denis Thompson and his talented team reached a new milestone, adding another three courses to the 39 different options that already exist in the Race Week sailing instructions, built up over 36 years of Australia’s largest offshore regatta.

IRC division 1 top honours again went to Marcus Blackmore’s polished Hooligan crew, the TP52 launching off waves and hard-running downwind with the crew stacked at the back of the bus, grinning. The Oatley’s RP66 Wild Oats X also liked the pressure, finishing second to Hooligan on corrected time, their best result so far.

Wild Oats X navigator Adrienne Cahalan said of the quick turnaround between the lengthy postponement and racing beginning at 1pm: “That start was really exciting, a short lead up time….bang one hour and you have to mobilise 18 people, then you are in sequence in 25 knots, in a confined area. That’s where all those hours of teamwork are put to the test.”

At the midway point of the six-day series the three 60-footers, Wild Oats X, Chinese Whisper and No Limit, are on equal points, which “ups the stakes” Cahalan added.

All divisions take a day’s break on Wednesday August 21 before racing resumes on Thursday, the outlook showing S-SE winds averaging 14-18 easing to 12-16 and tending more easterly in the afternoon.

Layday highlights include the ticketed Charles Heidsieck Champagne lunch at qualia and the Summer Bright pool party at the main pool, plus making final preparations for Thursday’s morning best excuse for adults to dress-up – the Prix d’Elegance prior to racing, which begins at 10.45am in Dent Passage.