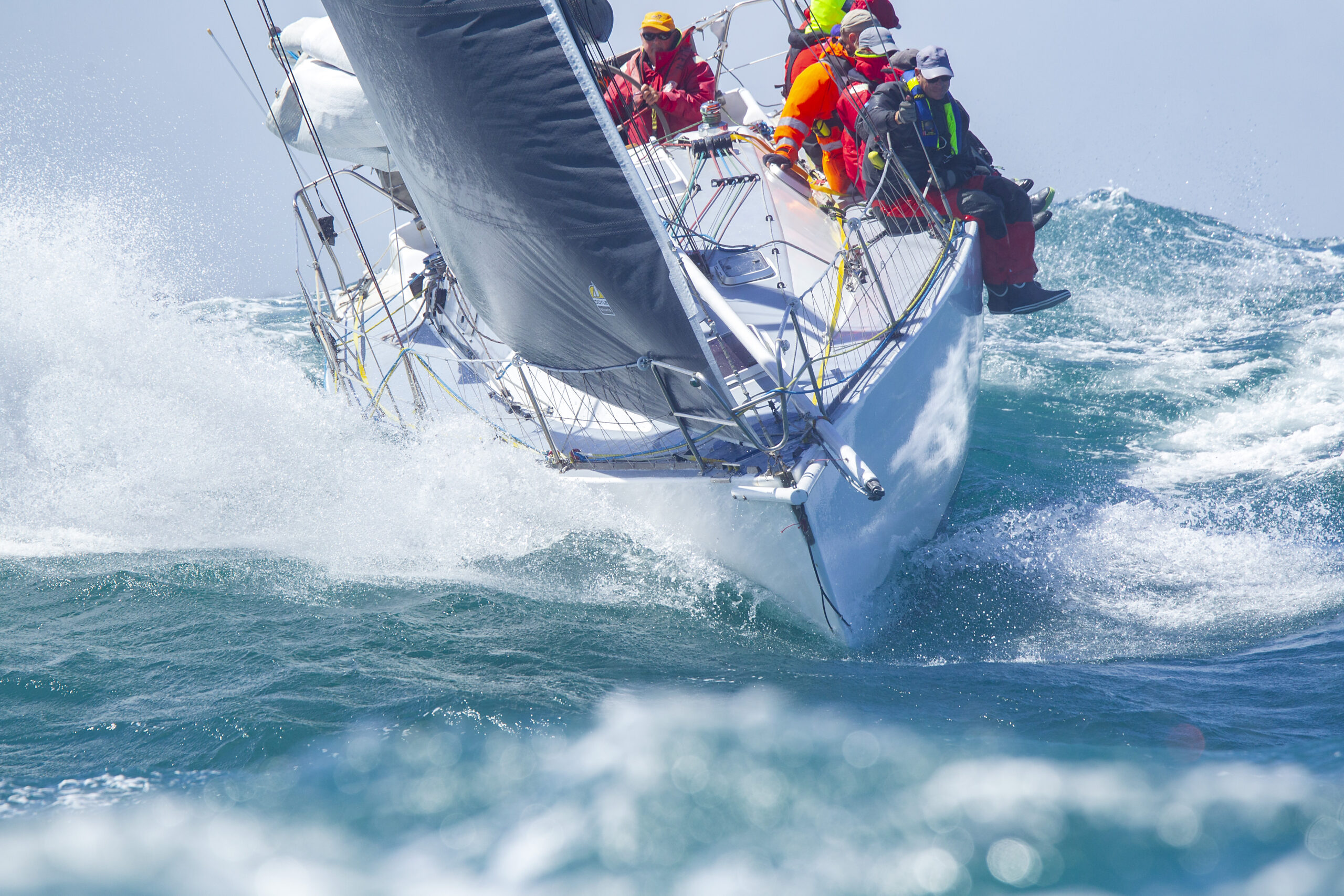 Make or break decision to be made for Hobart fleet

The combined Melbourne to Hobart and Melbourne to Devonport fleets had a very civilized start time of 14:30 today in the vicinity of Portsea Pier, allowing for excellent spectator viewing.

With 20 knots of offshore breeze and a good length start line the fleet had a clean reaching start carving away to the first mark of the course at Shortland Bluff.  Grant Dunoon’s Moody 54, Blue Water Tracks was closely followed by Vagabond and Alex -Team Macadie.

One of the pre-race favourites, Lord Jiminy skippered by Guillaume Leroux had a delayed start.  The Class 40 that took Line Honours in the 2019 Westcoaster crossed the line 33 minutes after the fleet.  A time difference that could cost multiple places at the finish.

First through The Heads of Port Phillip in challenging 2 – 3 metre swell was hotly contested with Alex-Team Macadie nosing just ahead of Tevake ll.

The Melbourne to Devonport fleet will be hoping to make ground before they hit the predicted weather ‘hole’ in the middle of the course.  The entire fleet is currently tracking well to the west of the rhumbline, Gusto Solo sailed double handed by Brian Pattinson and his son Tristan are leading the fleet in his new Don Jones 42 with Nigel Cunliffe’s Scaramouche slightly further west.  Presumably Cunliffe’s tactic is to attempt to maximise his wind and set the best line for his tack back later in the race.

The Melbourne to Hobart fleet has a weather dilemma that has rarely been seen in this Westcoaster race.  Current the modelling suggests that the fastest course to Hobart is to go West of King Island.  This track is well away from the direct rhumbline and adds approximately 25 nautical miles to the course.  Tacticians will have to make some race defining decisions around six or seven tonight.

Currently Tevake ll and skipper Paul Nielson are closest to the rhumbline followed by Audere.  While Macadie on his double handed Alex are tracking to the west and enjoying a good boat speed of close to nine knots.  Vagabond, Blue Water Tracks and the Sydney 38 Faster Forward have all chosen to point this way as well.  Late starter Lord Jiminy are making excellent boat speed and have also manoeuvred to this more westerly position.

While tracking to the west of King Island maybe risky, this year’s unusual weather conditions may be the year to try.

Race director Jeremy Walton said tonight, “We are very happy to have had a clean start and are intrigued to see the tactics, particularly in the Westcoaster play out over the next eight hours.  On current forecast we expect to see the Devonport fleet somewhere near the finish line by midday tomorrow.”