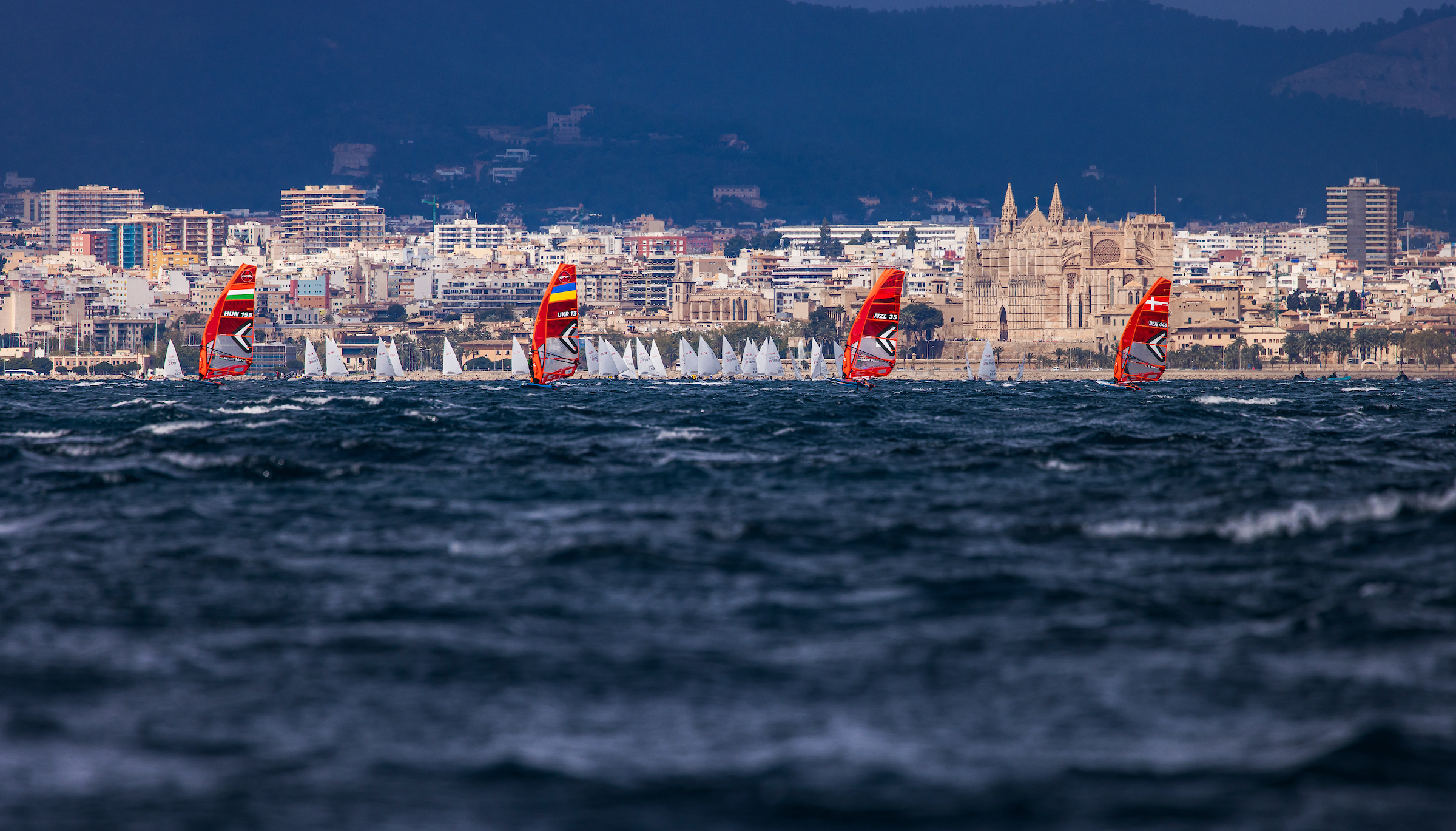 When racing starts on Monday on Mallorca’s famous Bay of Palma at the giant 51 Trofeo Sofia Mallorca, the first Hempel World Cup Series regatta will usher in a whole new era for Olympic classes sailing.

Of the ten classes set to race this week, five are new to the roster of classes which will race at the Paris 2024 Olympics.

The high level of anticipation is shared equally between the 1,000 sailors as well as the local organisers who have worked tirelessly to ensure that this huge undertaking, which requires an unprecedented eight course areas and 250 officials on the water, goes off without a hitch.

And with a stiff 20kts offshore north-easterly wind forecast, Monday’s debutants, the iQFoil fleets and the Mixed 470s will be offered something of a baptism of fire, as will be the two ILCA fleets, the strongest of which is the Men’s ILCA 7 class which sees all three Tokyo medallists resuming rivalries for the first time since the Games.

The Men’s iQFOiL has drawn a high quality field which is a mix of past RS:X Olympic campaigners transitioning to the foiling board, and foiling windsurfers from the Professional Windsurfing Tour.

Righting moment – weight and power – are among the primary requirements for top straight line speed. Badloe is up from a lithe RS:X 73 kilos to ‘somewhere around 90 kilos’.

The effervescent Dutch windsurfer enthused, “It’s a new start and it’s like a new sport. I’ve put on a lot of weight since racing the RS:X in Tokyo. I’m 1.95m, so staying at 73 kilos for Tokyo was really hard, having to diet. For me it’s good to be somewhere above 90kg is good, I feel healthier. We need the extra weight because when the foil lifts us out of the water we have no water resistance and we hit high speeds. So it’s a little bit faster to have more weight to swing down.

“The iQFOiL is great because it brings the whole windsurfing community together. We’ve got guys from the PWA, guys from the slalom and the freestyle, and then we’ve got former Olympians like me. And it’s great to see that everybody has their own strengths. The PWA guys are incredibly fast and they know the gear really well, how to tune it and how to tweak it. They’re just very fast sailors. So if they get a bit of runway, they can go quite fast.

“The guys that come from the Olympic fleet, they’re a little more strategic. I think we read the wind shifts a little better and we would like to think we’ve got a bit more fitness and an ability to keep pumping the sail longer. Eventually the guy that’s going to win is going to be somewhere in the middle. You’ve got to be fast enough. You’ve got to match the guys that come from the PWA, but you’re also going to have to sail smart around the race course,” said Badloe.

And the mixed 470 fleet is poised and ready to show the virtues of what here amounts to the amalgamation of the best of the men’s and women’s fleets. GBR’s Women’s 470 Olympic gold medal winning crew Eilidh McIntyre is racing with Martin Wrigley and believes there will be little to choose between the different combinations of male or female helms and crews.

“It is so exciting. What is most exciting is to be merging the top of the men’s fleet and the top of the women’s fleets and that means a lot more boats. I think there will actually be more depth in the class and it will be harder to make the top 12, say, or the top 15 and I think here we will see some high points scoring especially among the newer teams,” says McIntyre. “But really we are all in the beginning phase. There is so much to learn and improve. The really big thing is getting the team work down and roles and responsibilities.”

With a maximum sized fleet of 180 boats racing, as the new ‘quadrennial’ starts the ILCA 7 men’s fleet has lost absolutely nothing in quality and intensity. Australia’s reigning Olympic champion Matt Wearn sets off this week on his quest to become the first sailor to win consecutive ILCA 6/ Laser Olympic titles. Pressed by an Australian squad which he warns ‘could finish four or five of us in the top ten’ he is only too aware that he will have a battle on his hands to make selection for the 2024 Olympic spot.

Wearn observes, “There are only two years to go until Paris so this feels like a new beginning and I really want to get started on the right foot. There are 20 or 30 guys who can win a regatta in the ILCA 7. I am sure we will see other guys who had results in the Worlds who will be keen to do well.

“We have some new, younger blood in and they are hungry and pushing me hard. One of them, Zac Littlewood, got fifth at the world championships. He his hungry and keen to push me off my perch for Paris and so I have to be on my toes. We are stronger than ever, I would not be surprised if we had four or five of us in the top 10 this week.”

Local hero Joan Cardona, Spain’s Bay of Palma bred 2020 Finn bronze medallist, has slimmed down from a Finn max of over 100kgs to ‘somewhere around 80’ as he returns to the Laser at the home regatta that he first sailed as a callow teenager.

“I’ve been sailing in this regatta since I was 14 years old in the Laser,” grins Cardona who is the Balearics’ first Olympic sailing medallist since Palma’s Jordi Calafat won 470 gold in Barcelona. “The first one I think was 2013 and I was at Optimist age but I was already with the big guys, the likes of Nick Thompson, Robert Scheidt,… I was so young I didn’t even know them.”

Cardona concludes, “It’s great to be back in Palma after such a long time. It’s my first international regatta in ILCA 7, and also at home since the Games so I want to do well. My preparation is going very well, with the feeling that I’m getting better every day. But I think it will be difficult to get a good result, because it’s a very competitive class, and I’d be happy with a top 30 finish. I’m not so much focused on the result as on competing at my highest level with the training I’ve been doing, and we’ll see.”

Regatta technical director Ferrán Muniesa, promises a typically varied week of winds, “Mallorca is always known for different conditions and I think we will get a good mix through the week. It looks we will start with a NE’ly breeze offshore of about 20kts and then it will shift to the NW to the Mistral direction in the middle of the week, and then the last two days and for the medal race we are looking at S and SW’ly winds, one or two days of seabreeze. I never like to talk about the weather but we should sail every day.”

By Andi Robertson and Andy Rice