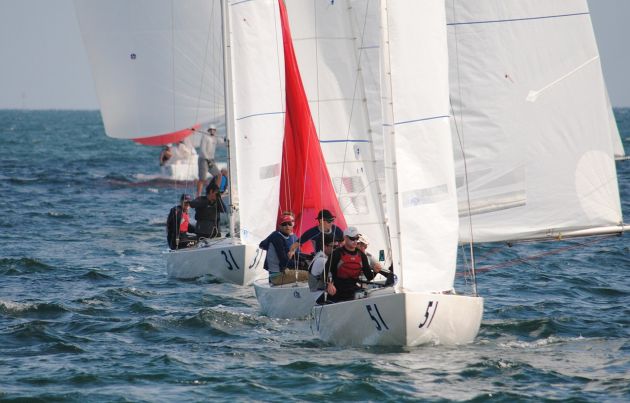 Bertrand and crew did not need to sail the final race, but neither did they have it all their way.

Two races were sailed on Saturday to kick of the Championships. Under overcast skies, 20 Etchells crews were challenged by an oscillating southerly that gradually increased from light to moderate as the afternoon progressed.  There were plenty of position changes throughout the races and some tight finishes.

At the end of day one, John Warlow, Ben Lamb and Curtis Skinner on Land Rat held a 5 point break on Triad (John Bertrand, Bill Browne and Jake Newman) and 2016 Australian Champion Graeme Taylor sailing with James Mayo and Richie Allanson on Magpie. Triad and Magpie were then equal on 8 points.

The second day of the Victorian Etchells Championship was a frustrating one for both competitors and the race management team. The light breeze before the published start time of 11am became unstable and faded, so a postponement was signalled and teams towed back to the marina before noon. It was not until 3pm that the race committee were able to get racing back underway, so only one race was sailed.

Triad was first across the line, six seconds ahead of Barry (Damien King, Ben Morrison-Jack and Simon Cunnington), with Jukes of Hazzard (Brendon Jukes, Cameron McKee, Matthias Houvnagel and Nigel Jones) in third. John Warlow’s Land Rat and Graeme Taylor’s Magpie had to return after being OCS in Sunday’s race shaking up the leader-board and moving Triad into the lead after two days.

Today, Port Phillip delivered some moderate to fresh conditions, allowing three races to be sailed and a full regatta program to be completed. Bertrand’s Triad showed a clean pair of heels to the fleet in today’s first race, finishing 90 seconds ahead of Magpie and Sun Tzu.  After another win in the next race, it was enough to secure the championship without sailing the final race.

Magpie were second in the second race today and won the final, but finished up two points short of the Triad crew.  John Warlow, Ben Lamb & Curtis Skinner on Land Rat were unable to regain their day one form and finished third overall.

Competitors praised the Melbourne Etchells Fleet and Royal Brighton Yacht Club volunteers for their efforts in organising and delivering another great regatta.

For the Regatta Results – http://www.rbyc.org.au/wp-content/results/2015/specialevents/EVicChamp16/series.htm