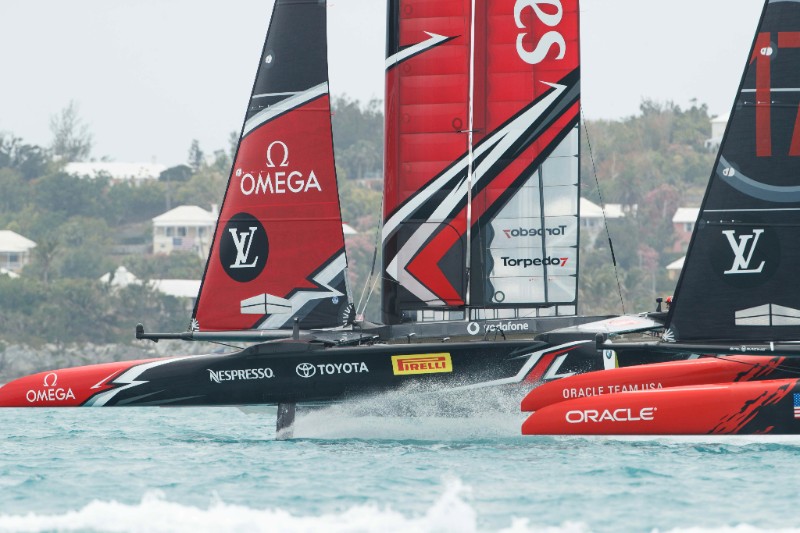 Back to earth with a bump today for Emirates Team New Zealand, the Kiwis handed a match-racing lesson from Oracle Team USA in an error-strewn end to the Louis Vuitton qualifying series.

After enjoying two almost flawless wins yesterday, the challengers got off to the worst possible start by copping a double penalty at the start. Nearing the top of the starting line Jimmy Spithill, to leeward with rights, tried to squeeze Burling above the upper mark but Burling held his course and thus failed to keep clear.

Oracle sped off to lead around Mark 1 by six seconds and with a click more speed downwind the Americans stretched the margin to nine seconds by Mark 2.

Flying into the top mark on port at speed, Burling managed to cross the Americans who were on starboard and briefly took the lead. But after tacking in the face of Oracle, the Kiwis were unable make to make it stick and the Americans simply drove through and sped off.

All the good work climbing back into Oracle on the beat was undone and the Kiwis were in catch-up mode again.

Compounding the error Burling then drove Emirates Team New Zealand across the race course boundary and received a third penalty, followed by a fourth for failing to take the third in a timely manner.

Oracle sailed away for a 29 second win and now takes a bonus point for winning the qualifying series into the America’s Cup match.

“Obviously it’s a little disappointing to lose that one point, “said Burling. “But at the end of the day, it’s about carrying on improving and carrying on learning and making sure we get back facing them again.

“We made some little errors and then learned a lot and we stayed out for a while afterwards to practice a few things that went wrong during the race and we are really happy with the few improvements we made afterwards.”

As the top challenger Emirates Team New Zealand got to choose their opponent in the semi-finals and picked Britain’s Ben Ainslie Racing for the first to five series which starts tomorrow.