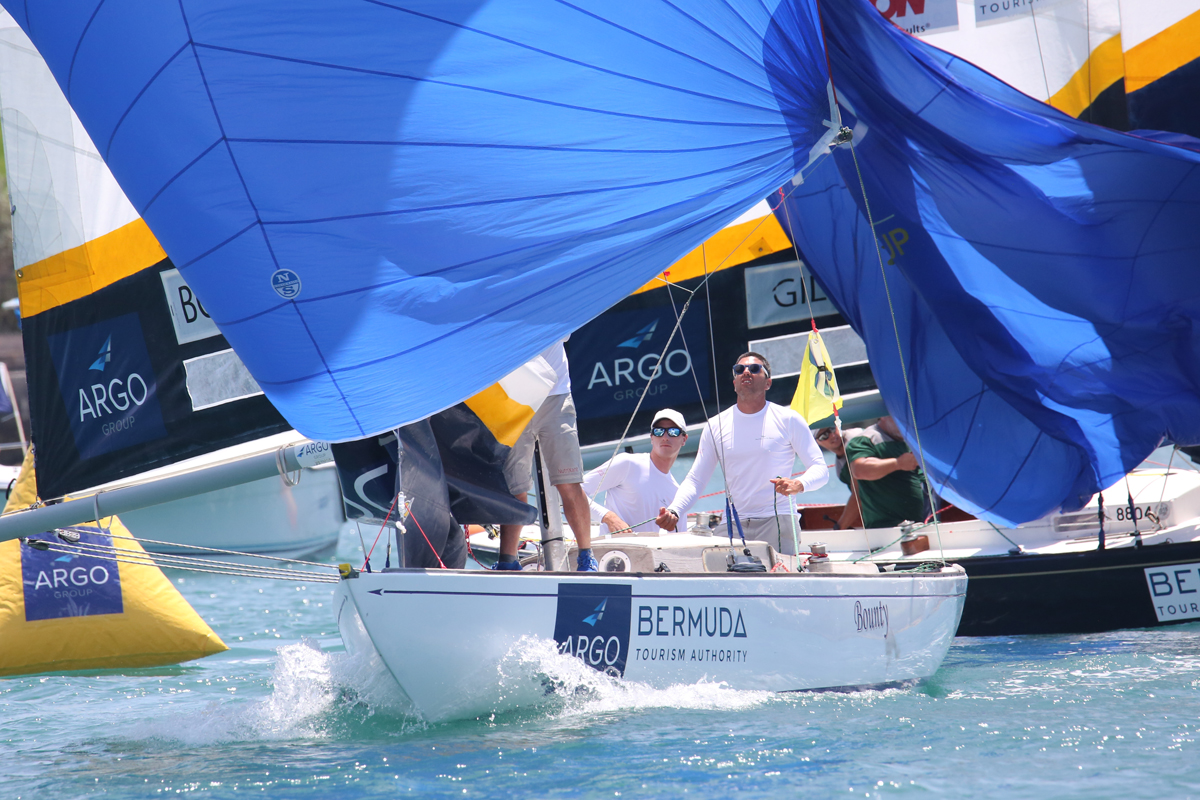 Hamilton, Bermuda: What’s the recipe for an unpredictable, Grade 1 match racing regatta? Start with two women’s crews, add a dash of youngsters and throw in a handful of treacherous veterans and you get the 2019 Argo Group Gold Cup.

The 69th competition for the revered King Edward VII Gold Cup trophy, scheduled for May 6-11, and hosted by the Royal Bermuda Yacht Club, features just such a sterling lineup. It includes Women’s World No. 1, Pauline Courtois of France, and No. 6, Lucy Macgregor of Great Britain.

The top five in the Open Rankings includes Eric Monnin of Switzerland, Ian Williams of Great Britain, Harry Price of Australia, Ettore Botticini of Italy and Maxime Mesnil of France.

Grizzled veterans Torvar Mirsky of Australia and Johnie Berntsson of Sweden and wild cards such as Nicklas Dackhammar of Sweden and Chris Poole of the U.S. add a spicy blend to the fleet, which collectively boasts 12 match racing world championships and four Argo Group Gold Cup championships.

The 12-team lineup was completed with the addition of Bermudian Kelsey Durham, the 2019 Bermuda Match Racing champion. Durham, 25, of Smiths, will race with Stevie Dickinson (St. George’s), Heath Foggo (St. George’s) and Campbell Duffy (Warwick). Another Bermudian, Emily Nagel (Warwick), of the past Volvo Ocean Race, will sail with Poole.

During his high school years Durham attended Brewster Academy (Wolfeboro, New Hampshire) in the U.S. where he was a skipper on the varsity team for all four years. In 2009 he helped the team win the Cummings Cup at the Gloucester Fall Fleet Regatta, topping a field of 32 teams, and also led Brewster to a sixth-place finish at the high school nationals in 2011.

Durham has greater experience in team racing (three boats-on-three) as opposed to match racing (one boat-on-one), but after several years at the helm of an IOD he’s ready for the challenge of racing against the world’s best.

“It’s going to be a very challenging regatta. I am sailing against professional skippers that sail and train every day. They do this for a living so I’ve got my work cut out for me,” said Durham.

“I’m up for the challenge. I feel comfortable sailing the IOD and getting it going, but the crew also has to be on point as they play a big role getting the necessary speed and boat handling needed around the course.”

Durham is one of three skippers aged 25 or younger in the regatta, the others being Botticini and Price, both aged 23. The 69th Argo Group Gold Cup also features two very successful women skippers in Courtois and Macgregor.

While Courtois is making her debut in Bermuda Macgregor is hoping to break into the Argo Group Gold Cup’s winner’s circle in her third attempt. The two-time women’s world champion had a magical run at last year’s event, placing fourth overall in the best showing ever by a women’s crew. She comes into this year’s event more on the rusty side.

“Last year feels like a long time ago. I have only done one match race event since then, so I am just looking forward to being back on the water and racing against some of the best teams in the world, although I’m not looking forward to how out of practice I’m going to feel,” Macgregor said.

“From last year, in general we were starting well but sometimes lost a little in the first couple of tacks so that will certainly be something for us to work on.”

Monnin’s Swiss Match Racing Team comes into the Argo Group Gold Cup as the new World No. 1, having leapfrogged Williams in the latest rankings. The 43-year-old Monnin, who’ll be racing his 12th Argo Group Gold Cup, posted two firsts and a second in three Grade 1 match race events over the past year and comes in with abundant experience of Hamilton Harbour.

“The Argo Group Gold Cup has been very welcoming to newcomers through the years, with qualifiers and a format that allows for a high number of teams,” said Monnin, who placed second overall in 2014.

“We were able to participate very early in our match racing career and liked the event a lot because it is special in many aspects. The history of the event is impressive as well as the traditional boats.

“We’ve performed well in Bermuda, but have never managed to win,” Monnin continued. “The field of competition is always outstanding and to win this event is a real challenge.”

The crew-on-crew racing, more similar to a wrestling match where tactics, strategy and escapes are rewarded, will be held on Hamilton Harbour, directly in front of the Royal Bermuda Yacht Club docks where the exciting pre-start circling action is often played out within feet of the docks.

The Argo Group Gold Cup is sponsored for the 10th year by Argo Group International Holdings, Ltd., an international underwriter of specialty insurance and reinsurance products in the property and casualty market. The Bermuda Tourism Authority is the Host Sponsor.