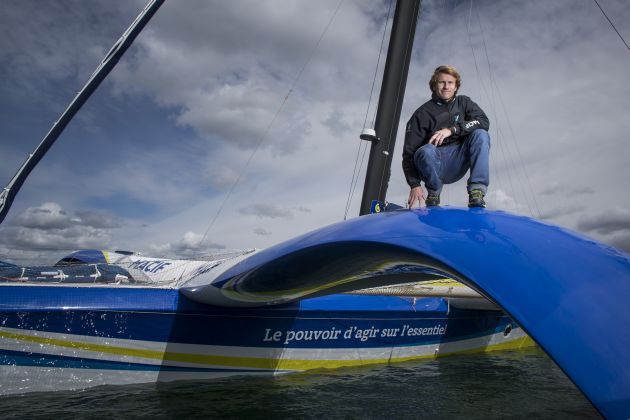 How has this come to pass? Quite simply, two words: Eric Tabarly.

In 1964, this seemingly reticent French naval officer stunned the sailing world by not just winning the second Observer Singlehanded Transatlantic Race (OSTAR) from Plymouth, UK across the North Atlantic to the Newport, Rhode Island, but demolishing the opposition, taking the race record down from 40 days to 23. And this was at a time when there were no waypoints to keep you clear of icebergs and no weather routing to allow you to weave your way around the worse part of depressions.Tabarly’s victory in a de Gaulle-ruled France, still trying to undent its national pride after World War 2, caused a sensation. The canny de Gaulle made his much needed new hero a chevalier of the Légion d’honneur (similar to being knighted). 12 years later, against all the odds, Tabarly won the race again as, on his own, he manhandled upwind the 32 tonne maxi which he had previously raced fully crewed in the first Whitbread Round the World Race. For this, Paris laid on a ticker tape parade for him down the Champs-Élysées.

If Tabarly’s own achievements were worthy, his legacy resounds stronger. His success inspired several generations of top French sailors, many of whom raced with him, including Olivier de Kersauson, Marc Pajot, Yves Parlier, two time Vendee Globe winner Michel Desjoyeaux, Roland Jourdain and Jean Le Cam. But basically anyone involved in offshore racing in France over the last 30+ years has him to thank, for inadvertently Tabarly also created an industry.

In France heroic sailing exploits and those that undertook them became big news and companies stepped in with increasingly large sponsorship to exploit the media frenzy. Tabarly famously got backing from Cote d’Or and Paul Ricard. Elsewhere, during the mid-1980s boom period, Marc Pajot allegedly became France’s most highly paid sportsman due to oil company Elf Aquitaine supporting his offshore multihull campaign. Meanwhile other French companies, such as champagne maker Charles Heidseick, were ploughing large chunks of their marketing budgets into this sporting gold mine.

Economic fluctuations have had a major effect on French sponsorship over the intervening decades, but, remarkably, the business that Tabarly caused is today possibly at its strongest:

The Mini class is not quite getting the 130 entries fighting for the 70 or so places in its biennial Mini Transat as it did a decade ago, but it remains healthy. So does the one design 33ft Beneteau Figaro IIs class with its annual Solitaire du Figaro, the unofficial world championship of singlehanded offshore racing. While it is little known outside of France, the amount of training that goes into it, and the resulting level of competition, makes the Figaro rival the Olympics or America’s Cup.

In the 12 years Class40 has existed, 148 examples have been built, which is similar to the number of Farr 40s built. While racing remains centred around France with events such as the 1000 mile Normandy Channel Race and races across the Atlantic such as this year’s The Transat and the Quebec-St Malo, Class 40s now reside in most corners of the globe. Of all the French classes it is the one to become most international.

For the IMOCA 60s, the four yearly Vendée Globe takes place this November, competitors sailing non-stop singlehanded around the world, some scaling their own personal Everests, others fighting it out for line honours in the ultimate offshore yacht race. Incredibly, this year’s event has a record-sized list of potential entries, fighting for the 27 available places – at the last count 22 of the 34 potentials were French.

Seven new IMOCA 60s have been built for this Vendée Globe, six being VPLP-Verdier designs that are foil-assisted – they don’t fly (yet), but their new foils help provide extra righting moment while also reducing wetted surface area and drag. Some of the time…

And that’s only the monohulls!

While the French didn’t invent modern day multihulls, they certainly played the major role, by far, in developing them. Were it not for the French, the modern America’s Cup would certainly not be on two hulls, nor foiling.

Perhaps least known of all the French classes internationally is the Multi 50, which in the multihull world is to an ORMA 60 or MOD 70 what a Class40 is to an IMOCA 60, ie dumbed down, cheaper and capable of being sailed by more average mortals. However of all the French classes this is one that is teetering on the brink with only four examples racing in last year’s Transat Jacques Vabre.

Remarkably, given their economic crisis, the French class on the steepest ascent is the Ultime. To date this has taken in all of the breed of giant multihulls, built originally either for The Race (the fully crewed non-stop round the world race in multihulls, organised by Bruno Peyron and held in 2000) or the Jules Verne Trophy (outright non-stop round the world record) or the Jules Verne’s singlehanded equivalent. While to date the Ultimes are mostly around 100ft long, with the exception being the present Jules Verne Trophy, Transatlantic and 24 hour record holder, Banque Populaire V (now Dona Bertarelli’s Spindrift 2) at 40m (131ft) long, there is a move to consolidate the class at 100ft.

While in any other country the concept of a 100ft multihull class would seem pie in the sky, in France it is very real. Six examples (including Spindrift 2 if she’s grandfathered in) already exist including a new 30m (98ft) trimaran, MACIF, for winner of the last Vendée Globe, Francois Gabart. Fresh out of the box last year this won the doublehanded Transat Jacques Vabre from Le Havre in north France across the Atlantic to Itajaí, Brazil. The green light has been pressed on two more similar boats, a new trimaran for Banque Populaire and yet another Gitana to add to the stable of Swiss banker and yacht racing philanthropist, Baron Benjamin de Rothschild.

And to make matters all the more exciting, the Ultime class is lining up to compete in the race to end all offshore yacht races: Non-stop, round the world, singlehanded on 100ft multihulls, scheduled to take place in 2019, starting and finishing off Brest on France’s northwesternmost extremity.

This has all the ingredients to be successful – epic, potentially dangerous, impossibly hard, etc – and will further fuel French passion for offshore racing.

There will naturally be an outcry that sailing such enormous boats singlehanded non-stop round the world, is dangerous. In fact these boats, while large and cumbersome, are substantially safer than you’d imagine. Firstly due to their size, massive buoyancy forward in all three hulls, plus the lifting foils in their floats and because they are relatively underpowered, they are, compared to older multihulls, much less prone to capsize – the Achilles heel of all multihulls.

Unlike Volvo Ocean Race boats, they are designed to protect the crew when sailing fast: The cockpit and helming position are protected by the aft beam and on some there’s even an additional windscreen for the helmsman. On the new MACIF the cockpit even has a roof…

Thanks to Tabarly and his legacy, France has also been one of the leading nations when it comes to pioneering yacht design. Racing a multihull with a wingmast? Tabarly did it in the 1960s with Pen Duick IV. Racing a multihull on foils? Tabarly did in the 1970s with his Paul Ricard and Cote d’Or foiler trimarans. Admittedly there were less successful developments such as the keel containing spent uranium on his Pen Duick VI – a great idea, but one that forced Tabarly to race her as an unofficial entry in the 1977-8 Whitbread Round the World Race.

Tabarly’s pioneering spirit has endured, particularly in the likes of Michel Desjoyeaux and Yves Parlier. While he didn’t come up with the idea, Desjoyeaux’s successfully fitting a canting keel to his Mini in 1991, which inspired Isabelle Autissier to do the same to her new IMOCA 60 two years later. Today canting keels are standard fit on all IMOCA 60s and Volvo boats, taking over fully from water ballast as a means of increasing righting moment.

Yves Parlier was the first to fit a multihull-style rotating wingmast to his IMOCA 60 and also developed a 60ft catamaran with stepped hulls, similar to those used on flying boats.

Perhaps most extraordinary is how resilient French offshore racing is. Over the years there have been countless reasons why it should have all collapsed. Multihulls have capsized, as have monohulls and sailors have been lost – including Alain Colas, Loick Caradec, Daniel Gilard, Paul Vatine, Olivier Moussy and Gerry Roufs (even Tabarly was stupidly lost overboard on a routine delivery in 1998) – and many more have come close.

Legions of fragile French carbon fibre race boats have broken. Trimarans at one point continually broke off the bows of their floats. Then their cross beams started breaking. During the 1990s IMOCA 60s went through an embarrassing period when they lacked sufficient righting moment and boats would turn turtle and not right, leading to the famous incident during the 1996 Vendee Globe when the Australian navy had to mount a full scale rescue operation into the depths of the Southern Ocean to save two skippers. More recently IMOCA 60s keels have fallen off and rigs have come tumbling down, leading to both items being made one design for the latest generation boats.

Worse, classes have needlessly come acropper ashore. Best of all French classes was the ORMA 60 trimarans, one example now being Sean Langman’s Team Australia. The pinnacle of the ORMA 60 was the 2002 Route du Rhum, when 18 examples were on the start line. It also proved the nadir as the fleet was decimated by storm force winds and only three finished, just one without stopping.

Thanks to escalating costs, breakage, capsizes, etc, but mainly due to no one in the class having sufficient clout or diplomatic skill to resolve these issues, the ORMA 60 class self-destructed in the late 2000s. Its replacement, the one design MOD70 faired little better with great racing for three seasons before a lack of sponsorship caused the class’s original backer to throw in the towel.

With a challenge led by Franck Cammas, France is now trying to win the America’s Cup. Compared to the opposition, Groupama Team France is under financed and lacks the time on the water. But Cammas was also an underdog in the 2011-12 Volvo Ocean Race and we all remember what happened there… Tabarly would be proud.