In the 470 Women’s Carrie Smith (WA) and Jaime (Ryan) finished the regatta in overall ninth and secured Australia a spot at the 2016 Rio Olympic Games (subject to ISAF ratification). The top ten position at a World Championship also qualified the young duo for the Australian Sailing Team.

The 2015 470 Worlds were a rollercoaster of lows and highs as the leaderboard changed race by race. There was so much depth in performance amongst the fleet that any race could be won by virtually any team.

Belcher and Ryan showed their class over a challenging week in light conditions starting out in the lead to then later drop into third. But after a total of five race wins across the eleven World Championship race series on their scorecard, they managed to climb back up into the lead on the penultimate day of the regatta.

With only one point of separation between leaders Belcher and Ryan and the second ranked Croatians, the double-points medal race promised to be an exciting one as there was also no medal certainty for either of them with the door open to any of the top eight teams to step up to a podium finish.

But Belcher and Ryan made their intentions clear right from the start and were in front for the first half of the medal race with a final fourth place being enough to seal the deal.

“Obviously Will and I are really happy. It's been such a great battle with the Croatian team this week, nothing separating us all week. We are really proud to be able to perform under this pressure and it will help us come next year. It's a special feeling to be World Champion and to do it with Will and Victor for the third time is really special. And I never thought I would be able to achieve six World Titles in a row, but everything for us is about next year,” Mat Belcher said.

It is the third consecutive World Champion title for the successful combination of Mat Belcher and Will Ryan who have continuously finished on the podium at every sailing regatta they have competed at since getting together post the London 2012 Games. And with under one year to go to the Rio 2016 Olympic Games it is a special one.

“I’m really happy to have won the Worlds. Obviously this is a really special moment for me, to win it a third time, and in such tight circumstances today. But it’s especially special to do it alongside Mat winning his sixth consecutive, and Victor’s no. 18,” crew Will Ryan said.

And about the week as a whole he added: “It’s really has been a tough week, unusual conditions to perhaps what we were expecting. Many other teams have also really been sailing well such as the Croatian team and on top of that the heat here has added another element to what already has been quite a long and physically demanding event.”

“We have been very fortunate and are really thankful for all the support we have received from back home this past week! I was really lucky to have my father Frank and younger sister Elise here watching today alongside my two other sisters Jaime and Sasha who were competing. I know my girlfriend Nathalie and my Mum Mandy have also been up watching the online tracker, so it is nice to share this special moment with them all too.”

“We are now within one year to the Rio Games, which has obviously been the main goal since Mat and I teamed up. And to win this world championship was definitely a goal, so it is very satisfying to achieve it but the event has also given us further motivation and identified many areas to focus on as we build forward over the next year! Bring it on,” he added with a smile. 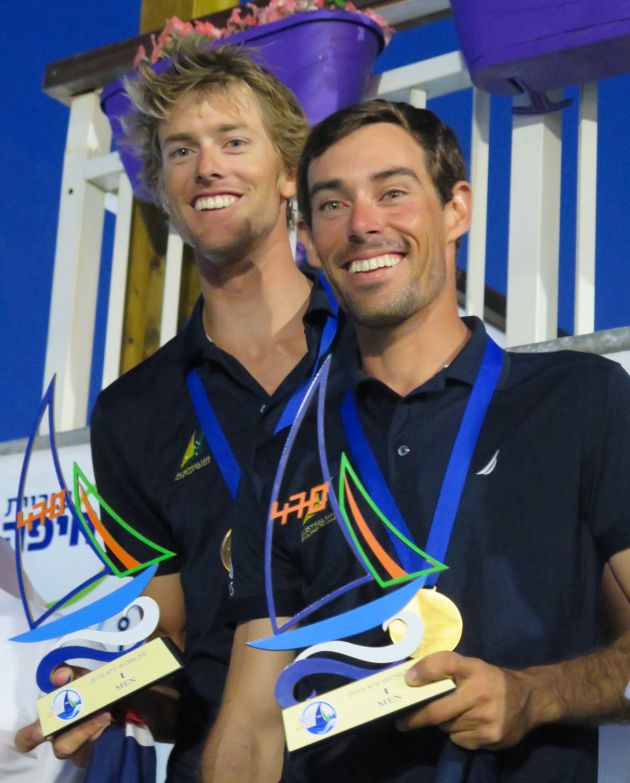 2013 ISAF Youth World Champion Carrie Smith’s and crew Jaime Ryan’s performance at these World Championships marked an impressive return to world class competition after extended medical issues had forced them off the race track for the majority of the time since the 2014 ISAF Worlds.

Thus just making the top-ten medal race was already a huge success for the pair. And finishing it off with an overall ninth and qualifying Australia for the 2016 Rio Olympic Games (subject to ISAF ratification) was a fantastic surprise and much deserved reward for a stellar performance for these up-and-coming sailors.

Thirteen nations had been gunning for the three Olympic qualification places at these World Championships and after two spots were already decided on the penultimate regatta day, it came down to the final battle between Spain and Australia over that last Olympic qualifying spot in the all-deciding medal race.

Carrie Smith and Jaime Ryan went into the medal race decider 11 points ahead of Spain and a sixth place in the double-points race and two places in front of Spain following in eighth sealed the deal.

The top ten finish at this World Championship also qualified them for the Australian Sailing Team.

“We have progressed really well, coming into the worlds we knew we wanted that qualifying spot but also knew with the lack of preparation that could be a big ask so we went with the mentality that ‘if it is meant to be it will be, we just have to work our hardest and enjoy being back in the boat. And that’s what we did and we’re so thrilled it all came together”, an excited Carrie Smith said after the race.

“The regatta has gone really well for us, the body has pulled up perfectly, the conditions have been very challenging but they are the conditions I most enjoy so it has been fun.”

And reflecting on the challenging months behind them Smith added: “We have grown a lot closer and stronger as a team through the tough time we have had the past year. It’s been tough just having a few weeks in the boat to prepare for the worlds, we have had to learn lots and get back in sync as a partnership pretty quickly but also wanted that rhythm to just come naturally, as we know we couldn't force it.”

“We didn't put pressure on ourselves other than just trying to do the best we could and let it all unfold from there. We had a great week of racing and it's been really nice to see that our hard work while we haven't been able to be on the water has paid off with gym, physiology, theory work. This is a very exciting time for us after a very tough year!”

“Coming into the last few days we got very, very hungry for the qualifying spot but also to make the medal race. Our determination and hungriness was extremely high so we are so very happy it has paid off! Medal race at the Worlds was a goal I thought wouldn't be possible just yet, so for it to happen I'm just extremely proud of us as a team. It shows us that any hurdles that are put in our way will always be jumped over because we love what we do and we want to do it well. I can’t wait for what’s to come!”

Carrie Smith and Jaime Ryan, who are coached by Olympic gold medallist Nathan Wilmot, delivered their best results of the series on the last two days of the regatta, securing them not only their first ever medal race at a World Championship but also the Olympic qualification for Australia.

“This was huge for us and it was our first ever medal race at a Worlds, a beaming Jaime Ryan said. “We didn't have high expectations for this event, after Carrie's health problems this last year we obviously came in really underprepared for a World Championships. We've probably sailed more in the three weeks here in Israel than what we have the last 12 months, and it's actually the first regatta we've completed fully since the World Champs last year.”

“To have a such a great result really is a huge confidence boost for us and makes us so excited for the potential of what is to come! We really wanted to earn our Olympic qualification place here. Qualifying for the Medal Race also qualified us for the Australian Sailing Team, and this last year more than ever we've realised how important the support of the team is so we are feeling really happy and are looking forward to making the team proud!”

Of the four Ryan siblings, three were competing in Israel in the 470 Class, with Will partnered with Mat Belcher and Jamie and Sasha in separate women’s partnerships.

There are ten Olympic boat classes and with this result Australia has now secured seven out of the nine boat classes it is aiming to qualify for the Rio 2016 Olympic Games. Australia already secured Olympic qualification in the men’s 470 class through Mat Belcher’s and Will Ryan’s World Champion performance in 2014.

Currently Australia has secured a spot at the Rio 2016 Olympic Games in the Men’s and Women’s 470, Laser, 49er, 49er FX, Nacra 17 and Finn classes. The upcoming Laser Radial and Women’s RS:X World Championships will be another opportunity to secure another two spots. If required, the final Olympic qualifying opportunity for Laser Radial and RS:X will be at the ISAF Sailing World Cup in Melbourne in December (7-13 December).